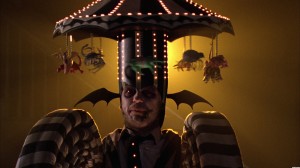 An appealing mess. Director Tim Burton joins forces with writers Michael McDowell, Warren Skaaren, and Larry Wilson, and a cast headed by Michael Keaton as the eponymous lead — a scuzzy miniature bio-exorcist — to create a rather original horror comedy out of what appears to be a strong first-draft script and a minuscule budget (1988). Faces stretch like Silly Putty and a ghost couple (Alec Baldwin and Geena Davis) try to oust a yuppie couple (Jeffrey Jones and Catherine O’Hara) from their New England mansion. The pasteboard special effects, which have a special charm of their own, make up in verve and imagination what they sometimes lack in polish, and Keaton has such a time with his extravagant turn as a demonic hipster bum that one can forgive the less inspired contributions of Glenn Shadix, Sylvia Sidney, and Dick Cavett, among others. PG, 92 min. (JR) 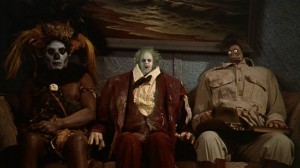