Swinging Both Ways [HIT AND RUNWAY] 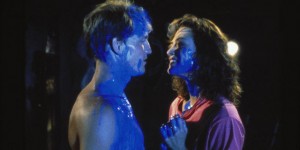 Written by Jaffe Cohen and Livingston 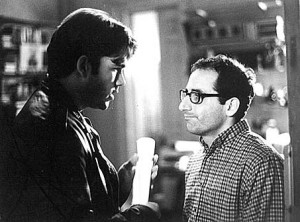 Hit and Runway – a comedy about a straight aspiring screenwriter in Greenwich Village taking on a gay playwright as a writing partner — comes from the writing team of Jaffe Cohen, who’s gay, and Christopher Livingston, who’s straight (he also directed). I knew nothing about this semiautobiographical movie until I saw it and nothing about the filmmakers until I looked at the press book, and I was fascinated to learn how semi the autobiographical aspects were.

That this movie exists at all deserves some consideration. It won a couple of festival prizes for best screenplay in 1999 and was copyrighted in 2000. I assume one reason it’s taken so long to get released — apart from being an independent feature without the clout of a major studio behind it — is the way it defies the assumptions of most publicists by refusing to address itself to either a straight or a gay audience to the exclusion of the other. It might not seem subversive for gay and straight viewers to watch the same comedy at the same time or even to laugh at the same jokes, but apparently this possibility conflicts with the way the big studios think about us as customers.… Read more »

Smell of Camphor, Fragrance of Jasmine

One of the more interesting personalities of the Iranian cinema, Bahman Farmanara produced a controversial early feature by Abbas Kiarostami (Report) and won praise for his own work, including the 1974 feature Prince Ehtejab. But he hit a government roadblock in the mid-70s, when all his proposals for films started getting rejected, and for much of the past quarter century he’s lived in the West (in Vancouver, among other places). In this welcome comeback (2000) he plays a middle-aged filmmaker rather like himself who ruefully accepts a commission to make a documentary for Japanese television about Iranian death rituals. His wife has been dead five years (though Farmanara’s wife, to whom the film is dedicated, is alive and well), and after discovering that the cemetery where he expects to be buried has planted someone else next to her, he embarks on the strange experience of witnessing his own funeral, one of many fantasy sequences. This oddball comedy, a selection at last year’s New York film festival, is full of wry asides and unexpected details that tell us more about contemporary Iran than we’d normally expect to find in a recent feature. I’m not sure how successfully all the pieces fit together–ultimately this is more a film of ideas than of memorable sounds and images–but it’s still a fascinating and entertaining piece of work.… Read more »