Reminiscences Of A Journey To Lithuania

The greatest film to date by poet, critic, curator, and director Jonas Mekas, this highly personal 1971 feature chronicles his first trip back to Semeniskiai, Lithuania, the village where he was raised, after an absence of 25 years. It’s a moving act of memory and self-scrutiny, reflecting in some respects the diary films he’s made since the 60s but clearly standing apart from them. Narrated by Mekas, the film opens with footage of his first years in America and closes with contemporary visits to a Hamburg suburb (site of a labor camp where he and his brother Adolfas spent a year during World War II) and Vienna (where he enjoys the company of several friends, including filmmaker-curator Peter Kubelka and critic Annette Michelson). But its centerpiece, entitled One Hundred Glimpses of Lithuania, August 1971, is the segment that shows his highly charged sense of film poetry at its most distilled and emotional. Essential viewing. 82 min. (JR)… Read more »

Sergei Eisenstein once described the ideas of Russian formalist Viktor Shklovsky as a string of pearls without a string. This ambitious 2002 first feature by Chicagoan Ines Sommer, a cinematographer who can conjure up more arresting images with digital video than most industry professionals can with 35-millimeter, is tenuously centered on a young woman (Terri Reardon) who does temporary cleaning work. She’s deliberately defined by her lack of definition (which is apparently what inspires her to change her name from Therese to Joan halfway through her lonely odyssey), but she provides only a slender thread for Sommer’s essayistic pearls, which document the city in terms of real estate, Native American origins (alluded to in the title), and invisible lower-income working women. The improvised performances are persuasive, and the heroine’s dreams are eerie and suggestive despite their seeming to develop independent of her personality; unfortunately not even the inserted text crawls explaining her background and supplying various statistics can make a satisfying narrative of this multifaceted collage. 85 min. (JR)… Read more »

A dry run for The Thin Man, with W.S. Van Dyke directing Myrna Loy in a comedy thriller (1933) about a hatcheck girl caught up in a murder. With Warner Baxter, Mae Clarke, and Charles Butterworth. 90 min. (JR)… Read more »

Set at a Spanish film school, this 1996 thriller about a snuff movie kept me on the edge of my seat. It’s the second feature by Alejandro Amenabar, and I’d rank it higher than his subsequent and artier Open Your Eyes (as well as its American remake, Vanilla Sky). It never got a proper U.S. release, possibly because people in the industry are reluctant to show subtitled movies in multiplexes and seem to think genre films are the domain of Hollywood studios. In any case, though I usually avoid slasher movies, I’d recommend this one without hesitation. The title translates as thesis. In Spanish with subtitles. 121 min. (JR)… Read more » 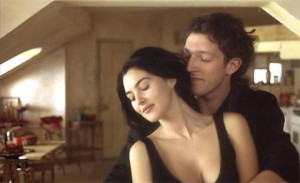 I saw this French mystery thriller, the first feature of writer-director Gilles Mimouni, shortly after its 1996 release, and it left little residue. However, it has Romane Bohringer (Savage Nights), and that’s definitely a plus. Just before leaving Paris for Tokyo, the hero (Vincent Cassel), who’s engaged, thinks he spots an old flame (Monica Bellucci) in a cafe. He becomes obsessed with seeing her again, finds out where she lives, and hides out in her apartment — though he winds up having sex with Bohringer instead. In French with subtitles. 116 min. (JR)… Read more »

No, this 1931 adaptation of the Dashiell Hammett novel isn’t as good as John Huston’s a decade later, but it has a few quirky virtues of its own, including brevity (at 80 minutes, it’s 20 minutes shorter than the Bogart version). The underrated Roy del Ruth, a fixture at Warners, directed quite capably, and the cast is offbeat if not always convincing: Ricardo Cortez as Sam Spade, Una Merkel as his secretary, Bebe Daniels as his lovely client, and Dudley Digges as the scheming Casper Gutman. (JR)… Read more »

Cast against type, Christina Ricci plays a blond princess from Pasadena with a hunky tennis champ (Sam Ball) as a boyfriend. She’s horrified when her college sorority selects Challenged Games as its off-campus charity, and frustrated when her naive ploy to match up the challenged athlete named Pumpkin she’s been assigned to mentor (Hank Harris) with an overweight friend ends in disaster. But then she falls in love with Pumpkin herself, her world falls apart, and all sorts of melodramatic developments ensue. This nervy feature starts off as satire, then turns into campy, hyperbolically overdetermined soap opera that might be even more purposeful insofar as one can’t hoot at it without considering what a more reasonable approach to such a subject might be, unpacking one’s own complacency in the process. Ricci herself is one of the producers and Francis Ford Coppola one of the executive producers, Brenda Blethyn (Secrets & Lies) plays Pumpkin’s misguided mother, and Adam Larson Broder and Tony R. Abrams, as codirectors of Broder’s script, make the weird transition from satire to camp as if there were no distinction between the two. It’s a bracing if at times bewildering experience. With Dominique Swain, Marisa Coughlan, Harry Lennix, and Nina Foch.… Read more »

Man Of The West

This late CinemaScope western (1958, 100 min.) by the great Anthony Mann achieves a tragic intensity and a monumental scenic splendor despite some serious handicaps: a stagy villain (Lee J. Cobb), an awkward lead actress (Julie London), and a screenwriter accustomed to working with confined spaces (TV dramatist Reginald Rose), none of whom complement the film’s quintessentially cinematic hero (Gary Cooper in one of his last and best performances). Cooper plays a reformed outlaw with a wife and kids (whom we never see); accidentally reunited with the gang he despised (including Jack Lord of TV’s Hawaii Five-O and Royal Dano of Johnny Guitar), he pretends to plan a new bank robbery in order to protect a saloon singer (London) and a card sharp (Arthur O’Connell). Mann, a master of framing figures against the landscapea farmhouse in a valley, a mountain range, an eerie ghost townand of subtly charting various kinds of psychological warfare, is so inventive in his treatment of this grim tale that he anticipates Michelangelo Antonioni’s L’avventura, released two years later. (JR)… Read more »

Jon Jost’s gorgeous, mesmerizing digital video consists of very slow overlapping dissolves between various exterior walls in Rome. Since the festival screening I saw in 2000, Jost has increased the length (to 80 minutes) and added an ambient sound track, but even the earlier version proved that Jost had finally made his painterly experiments in DV as rich as his films: despite what might seem a minimalist palette and framework, the gradual transformations of one wall into another are mysterious and all-enveloping. (JR)… Read more »

This interesting and effective spy thriller (1995), directed by Damian Harris from a script by mystery novelist Ross Thomas, starts out as an upscale Deep Cover: industrial espionage financed by big business takes the place of police undercover work in drugs, and Laurence Fishburne again ably plays a sort of double agent. But this film confounds most of the usual expectations. Though the atmosphere is predictably cynical, not all the characters are quite as cynical as they first appear. It might be argued that the personal stories ultimately overwhelm the political message (a common occurrence in Hollywood thrillers of this kind, excepting Deep Cover), but the overall theme of former CIA operatives going to work for big business is both plausible and eerily suggestive (as is the bunkerlike building where they work). Ellen Barkin is first-rate as Fishburne’s coworker and lover, and the secondary castincluding Frank Langella, Michael Beach, Gia Carides, David Ogden Stiers, Daniel Hugh Kelly, Spalding Gray, and an uncredited Michael Murphyadds flavor and piquancy. (JR)… Read more »