The fourth feature of writer-director Paul Thomas Anderson (after Hard Eight, Boogie Nights, and Magnolia) is a stridently wacky romantic comedy that stands or falls on whether you find Adam Sandler funny as a small businessman working out of a warehouse in greater Los Angeles. He didn’t make me laugh once, and neither did his costar Emily Watson, though Philip Seymour Hoffman, in what amounts to a cameo, made me laugh once or twice. I tend to like quirkiness, but this arch effort is so eager to be quirky nearly everything winds up willfully mannered, from Jon Brion’s flashy percussive score to the hyperbolically absurdist plot. Still, I wouldn’t have minded the Hollywood schlock lurking behind the studied weirdness if I’d believed in any of the characters on any level. With Luiz Guzman. 91 min. (JR) 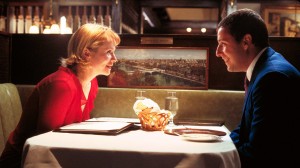 A movie about two Italian immigrant brothers (Tony Shalhoub and Stanley Tucci, both in fine form) who open a New Jersey restaurant called the Paradise; Shalhoub plays the artistic and temperamental chef, Tucci the more practical-minded manager (1996). Tucci wrote the script with his cousin, Joseph Tropiano, and directed it with one of his costars, Campbell Scott. Apart from offering what may well be the best advertisement for Italian cooking in movies, this little picture charms by virtue of its craft and patience; it moves at times more like a European movie than an American one, allowing its characterizations to grow on us, and the effort pays off. It also succeeds as a story about art and idealism and cultural assimilation. Others in the cast include Isabella Rossellini, Minnie Driver, Ian Holm, Marc Anthony, and Allison Janney. R, 107 min. (JR)… Read more »

This economically constructed and haunting chiller (1943, 66 min.) from the inspired team of producer Val Lewton and director Jacques Tourneur doesn’t have the reputation of the two other films they worked on together in the early 40s, Cat People and I Walked With a Zombie. In part that’s because its ending is a bit abrupt and unsatisfactory–but it’s still one of the most remarkable B films ever to have come out of Hollywood. Adapted from Cornell Woolrich’s novel Black Alibi by Ardel Wray and Edward Dein, the film employs an audacious narrative of shifting centers, thematically related by a string of grisly murders in a small town in New Mexico. Depending for much of its effect on a subtle and poetic nudging of the spectator’s imagination, the film has a couple of sequences that are truly terrifying. With Dennis O’Keefe, Margo, and Jean Brooks. A 35-millimeter print will be shown. Gene Siskel Film Center, 164 N. State, Monday, October 7, 6:00, and Wednesday, October 9, 8:30, 312-846-2800.… Read more »

The Toronto film festival is traditionally held in early September, about a month before the festival here, and in the 20-odd years I’ve been attending I’ve never been so aware of the ideological gulf between Canada and the U.S. as I was this year. It was evident on-screen, in, for example, the pointed comparisons between the two countries in one of the best films there, Michael Moore’s Bowling for Columbine, which takes up issues such as why people shoot one another, keep their doors locked or unlocked, and (more implicitly) do or don’t have national health care. It was also apparent offscreen, in the frequent anti-American slant of headlines and stories in Toronto newspapers. And it was visible in the feuding between a couple of high-profile American reviewers, Roger Ebert and Variety’s Todd McCarthy, who both expressed anger about not getting into certain press and industry screenings, and several members of the local press, who called the two spoiled and arrogant for making such a fuss.

Some of the tension was a symptom of war nerves, and it sharpened national stereotypes, making Americans seem pushier than they often are and Canadians meeker, in their willingness to queue up and behave and be more egalitarian.… Read more »