Where The Heart Is

A movie about what’s generally known as white trash—and not to be confused with John Boorman’s quirky 1990 comedy about yuppies, which bears the same title. Dumped by her musician boyfriend (Dylan Bruno) at an Oklahoma Wal-Mart, Novalee Nation (Natalie Portman), who’s 17 and pregnant, camps out and makes new friends, some of them played by Ashley Judd, Stockard Channing, and James Frain. Moving in fits and starts, mawkish in its sincerity, and at times disjointed in its lumpy structure, this drama about the plight of unmarried mothers, adapted by Lowell Ganz and Babaloo Mandel from a novel by Billie Letts, probably would have fared much better as a Warners second feature of the 30s, about half as long and twice as gritty. This has agreeable sentiments but lousy reflexes, such as its way of signaling tragic events well in advance through the hokey score. TV producer Matt Williams directed. 120 min. (JR)… Read more »

Luck of the Draw [THE SAME RIVER TWICE & STEVIE]

From the Chicago Reader, March 28, 2003. I was shocked learn on January 30, 2010 about the freakish and accidental death of Karen Schmeer, the gifted editor of The Same River Twice as well as many of Errol Morris’s films (including my favorite, Fast, Cheap, & Out of Control), in New York City, when she was hit by a car speeding away from a drugstore robbery — J.R. 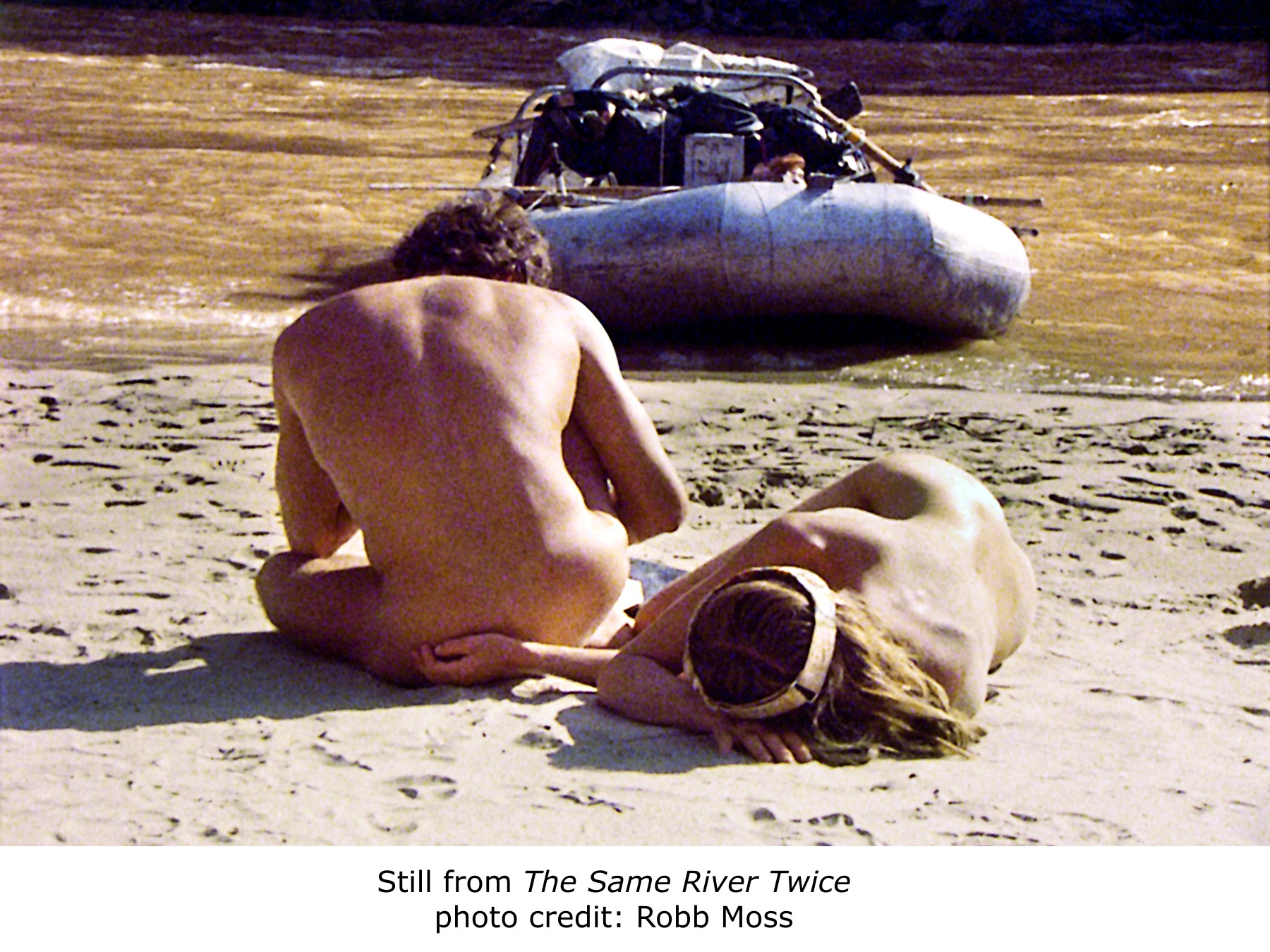 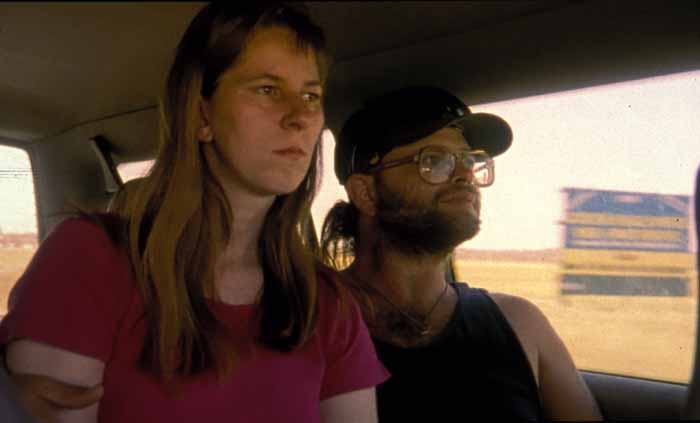 The first Chicago International Doc Film Festival is drawing to a close this weekend. Critics tend to make assumptions about the State of Cinema as if that were a knowable entity, generalizing on the basis of the few crumbs of pie the film industry and the media toss us. But we’re forced to face the inadequacy of those assumptions when something like this documentary festival demonstrates that the pie is a lot larger than we thought.

In 1978, Robb Moss filmed a river trip he took with his hippie friends in the Grand Canyon; 20 years later he visited five of them to see how they’ve changed and to reflect on the old footage. It’s a natural subject for a documentary, but this is far more than an evocative chronicle of a generation. Moss has an acute feeling for structure and juxtaposition and for the quality and sensibility of his friends, each of whom seems to have preserved his or her love of nature in a different way. 78 min. (JR)… Read more »

In her first feature, High Art (1998), writer-director Lisa Cholodenko created a convincing milieu of media professionals who were both sexy and unpredictable. This sophomore effort is even better, confronting two uptight lovers (Christian Bale and Kate Beckinsale) with the rock music scene when they graduate from Harvard Medical School and head west to complete their studies. Bale’s mother (Frances McDormand), a famous record producer, is sleeping with the lead singer (Alessandro Nivola) of the British band she’s recording at her Laurel Canyon home, and after she invites her son and his fiancee to move in, all sorts of unexpected things happen. McDormand has never been better, but all the performances are interestingly nuanced, including Natascha McElhone’s as one of Bale’s fellow psychiatric interns. I was put off by the inconclusive ending, but the rest of this movie more than makes up for it. 103 min. (JR)… Read more »

This effective, well-paced antimilitary thriller has more conflicting flashbacks than you can shake a stick at. On New Year’s Eve 1999 a sadistic drill sergeant (Samuel L. Jackson) at a U.S. army base near the Panama Canal leads a squad of trainees on jungle maneuvers during a hurricane, and only two men survive (Giovanni Ribisi and Brian Van Holt). The irritated captain (Connie Nielsen) calls in a cantankerous ex-army ranger (John Travolta, terrific) to help question the survivors about what happened. Director John McTiernan does a swell job with James Vanderbilt’s sneaky script in keeping us guessing. 98 min. (JR)… Read more »

Coline Serreau’s feminist comedy-drama (2001), about an exploited middle-aged housewife and mother nursing back to health a severely beaten Algerian prostitute, zips along with exemplary anger. Yet she’s created a world in which all the bad guysvirtually every male in sightget their comeuppance and all the women reap their just rewards, which may be another form of whoring: catering to the audience’s baser desires. With Catherine Frot, Rachida Brakni, and Vincent Lindon. In French with subtitles. 109 min. (JR)… Read more »

The Creators Of The Shopping Worlds

A 2001 video about shopping malls by Harun Farocki, probably the most important living essayistic filmmaker working in Germany, who has made over 90 works since 1966. In German with subtitles. 72 min. (JR)… Read more »

William Cameron Menzies, the production designer for Gone With the Wind, was also a director specializing in SF and paranoia (Things to Come, Invaders From Mars). In this low-budget anti-Nazi effort (1944, 72 min.) a German art dealer (Paul Lukas) gets his comeuppance after severing ties with his Jewish-American partner (Morris Carnovsky) and refusing to help the man’s actress daughter (K.T. Stevens), who’s being persecuted in Germany. This tale by Kressmann Taylor and Herbert Dalmas is clever at times but awkwardly told; it’s hardly a match for the anti-Nazi agitprop of Jean Renoir or Douglas Sirk (strangely, one never sees a swastika), but cinematographer Rudolph Mat… Read more »

The Guzzler Of Grizzly Manor

Self-styled goofy filmmaker George Kuchar tours festivals with some of his 60s work and pays mocking tribute both to himself and these events, with frequent allusions to the surrounding picturesque settings (2002). Fun but slight. 12 min. (JR)… Read more »

Peter Wintonick, codirector of Manufacturing Consent: Noam Chomsky and the Media does a pretty good job of surveying the direct cinema movement of the 50s and 60s promulgated by filmmakers and filmmaking units in France, Canada, the U.S. and elsewhere, such as Jean Rouch, Leacock-Pennebaker, and the Maysyles brothers. Most of what the filmmakers themselves have to say is interesting, and Kirwan Cox’s script for this 1999 documentary seems well researched. 103 min. (JR)… Read more »

The Tramp And The Dictator

The main pretext for this German TV documentary (2002, 55 min.) was the recent discovery of color home movies shot during the production of Charlie Chaplin’s black-and-white feature The Great Dictator (1940), the biggest commercial success of his career. Documentarians Kevin Brownlow and Michael Kloft are able to cut back and forth between the film and the home movies to show the same actions and sets from different angles, always to fascinating effect. There’s a lot to be said about Chaplin’s complex relation to Hitler: the Tramp’s resemblance to the fuhrer and the fact that he was loved by millions made Chaplin something of a rival as well as an ideological opponent, and though widespread rumors of his Judaism were false, he let them stand to express his solidarity with the Jews. Kloft and Brownlow never get past the more obvious parallels and differences between the two men, but this is still well worth checking out. In English and subtitled German. (JR)… Read more »

The Sound Of Jazz

A historic black-and-white TV show, broadcast live in 1957, that brought together Count Basie, Billie Holiday, Lester Young, Henry Red Allen, Jimmy Rushing, Gerry Mulligan, the Jimmy Giuffre Trio, and Mal Waldron, among others. Young, making one of his last appearances, was well past his prime, but Holiday watching him play is reason enough to see thisand there are plenty of other reasons. Curiously, the LP album of this show released in the 50s wasn’t the actual broadcast but a re-creation. (JR)… Read more »

In her first feature, High Art (1998), writer-director Lisa Cholodenko created a convincing milieu of media professionals who were both sexy and unpredictable. This sophomore effort is even better, confronting two uptight lovers (Christian Bale and Kate Beckinsale) with the rock music scene when they graduate from Harvard Medical School and head west to complete their studies. Bale’s mother (Frances McDormand), a famous record producer, is sleeping with the lead singer (Alessandro Nivola) of the British band she’s recording at her Laurel Canyon home, and after she invites her son and his fiancee to move in, all sorts of unexpected things happen. McDormand has never been better, but all the performances are interestingly nuanced, including Natascha McElhone’s as one of Bale’s fellow psychiatric interns. I was put off by the inconclusive ending, but the rest of this movie more than makes up for it. 103 min. Century 12 and CineArts 6, Landmark’s Century Centre.… Read more »

A Hollywood entertainment that lived up to its hype, this zany detective story (1988), set in Tinseltown 1947, follows the efforts of gumshoe Eddie Valiant (Bob Hoskins) to clear the name of cartoon character Roger Rabbit when he becomes the main suspect in a murder case. The movie, which combines live action and animation with breathtaking wizardry, was coproduced by the studios of Disney and Steven Spielberg; Robert Zemeckis is the director, and the script is by Jeffrey Price and Peter Seaman (based on a novel by Gary K. Wolf). As a labor of love it’s deeply moving: cartoon characters are treated as a repressed minority threatened by genocide, and gumshoes out of Raymond Chandler (or even Robert Towne) are almost equally archaic. Giving them all one last, delirious fling, the filmmakers create a densely upholstered universe where the denizens of both worlds mingle and learn from one another; a villain from the days of silent movies (Christopher Lloyd’s Judge Doom) is thrown in for good measure. Alternately hilarious, frightening, and awesome. PG, 103 min. (JR)… Read more »

While in rural southern Illinois in 1995, Chicago filmmaker Steve James (Hoop Dreams) contacted the abused, rejected kid he’d been a Big Brother to ten years earlier, Stevie Fielding. This remarkable documentary charts the renewal of their friendship, explores Stevie’s past, and attempts to come to terms with him as an adult — a more difficult task after he’s charged with sexually molesting a little girl. Taking nothing and no one for granted, including himself, James looks at his subject with admirable honesty, and the tragic tale that emerges is full of powerful lessons and impenetrable mysteries. In the process, we get to know something about the people closest to Stevie — his relatives and fiancee and some of the people in his community — as well as the abused girl’s mother. 140 min. (JR)… Read more »