The Shape of Things

Neil LaBute (In the Company of Men, Nurse Betty) delivers his most interesting and powerful film to date, though it’s also his most unpleasant and disturbing. Set at a small college, it concentrates on the evolving relationship between a shy nerd (Paul Rudd) and a brazen artist (coproducer Rachel Weisz), as well as his best friend (Frederick Weller) and the latter’s fiancee (Gretchen Mol) — and the less said about the plot the better. LaBute originally wrote this as a play while directing Possession (its opposite in every respect), and it often betrays its theatrical origins, though never to its disadvantage. LaBute has a lot of troubling things to say about both relationships and artists, and the writing and ensemble playing are so ruthlessly focused they hurt. 97 min. Century 12 and CineArts 6, Esquire, Landmark’s Century Centre. 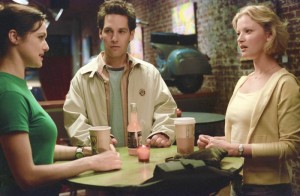