Amos Poe’s documentary about leftist singer-songwriter Steve Earle provides an interesting introduction to a compelling figure in contemporary pop music, but in all honesty I can’t say I’ve seen the whole film: at a preview screening, the masking of the 16-millimeter image cut off the bottom of the image, making most of the explanatory titles partially or completely unreadable. As long as I didn’t have to worry about these titles (some of which seemed important), I was held by Poe’s flashy style of processing and editing his material and by the plainspoken eloquence of Earle’s social and political commentarynot to mention the music. At 95 minutes, this clocks in at about the same length as the two-CD audio documentary of the same title. (JR)… Read more »

Shot on 24-frame video but looking none the worse for it, this satirical comedy about Hollywood deal making trades on an Emperor’s New Clothes theme. A 24-year-old screenwriter and script editor (Jordan Bridges, son of Beau), irritated by the glibness of his studio-commissary lunch pals, invents an imaginary script (New Suit) and an author named Jordan Strawberry; before long the buzz about it has become so frantic that the hero’s former girlfriend (Marisa Coughlan), a rising agent, claims to be Strawberry’s representative and launches a bidding war. Though the premise seems obvious and facile, the execution and the delineation of the various characters (all recognizable Hollywood types) are likable and funny, and the cast is great. Francois Velle directed a first script by Craig Sherman; with Heather Donahue, Mark Setlock, Benito Martinez, Dan Hedaya, Paul McCrane, and Charles Rocket. 92 min. (JR)… Read more »

A doctor in communist Poland learns that one of his patients plans to rob a bank and defect to the West in this Polish feature by Wojciech Wojcik. 96 min.… Read more » 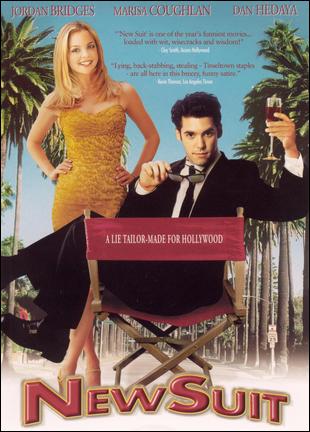 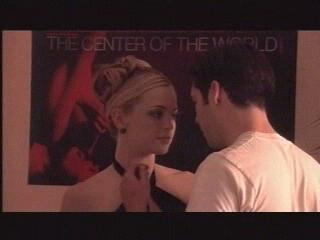 As the opening narration makes clear, New Suit – a satirical comedy about Hollywood suits — is loosely based on “The Emperor’s New Clothes.” Kevin Taylor, a 24-year-old script editor and frustrated screenwriter, is already jaded after 18 months working in the office of has-been producer Muster Hansau. Taylor (Jordan Bridges) gets especially irritated one day after hearing some of his hotshot coworkers spout bullshit at the studio commissary. He gets up from the table and buys a strawberry ice cream cone from a guy named Jordan, then returns and starts talking about an imaginary hot new script called “New Suit” by an imaginary writer named Jordan Strawberry that he says his bosses are excitedly pursuing.

His tablemates simultaneously claim they’ve already heard about the script and pump him for more information. Before long the whole town is talking about this promising property — especially after Kevin’s former girlfriend Marianne, a rising agent, overhears him saying that Strawberry is “unrepresented.” She promptly claims to be representing him, which starts a bidding war between two studios.… Read more »

At Five In The Afternoon

A young woman in a nomadic family in post-Taliban Kabul, grudgingly permitted by her father to attend a religious school, sneaks off instead to a secular school, where she expresses her dream of becoming president of Afghanistan and inspires a poet trying to woo her to print up her campaign posters. This is 23-year-old Samira Makhmalbaf’s third feature; it won the jury prize at Cannes, but it’s far less exciting than her first, The Apple. Attractively shot, it has moments of wit and poetry (the title comes from Lorca) but arguably adds less to what we know about contemporary Afghanistan than her 14-year-old sibling Hana Makhmalbaf’s documentary about its casting, Joy of Madness. In Farsi and Dari with subtitles. 106 min. (JR)… Read more »

Common threads of rage and revenge run through Australian director Rolf de Heer’s previous featureThe Tracker, an avant-garde aboriginal westernand this thriller in which a man comes home to an empty house and watches a video prepared for him by his wife. While extremely unpleasant, Alexandra’s Project (2003) is compulsively watchable, and actors Gary Sweet and Helen Buday both turn in tour de force performances. What begins as a story about a smug and insensitive husband getting his just deserts crosses a line that will have some blanching at the wife’s behavior as well. Like the work of Neil LaBute and David Mamet’s Oleanna, de Heer’s film puts us all on the spot. 103 min. (JR)… Read more »

Before turning 70 in 1978, Manoel de Oliveira had made just five features; since then he’s directed another 20, some of them masterpieces and some just mannerist curiosities. A comic parable deceptively couched in the form of a 19th-century travel narrative, this 2003 film is a little of both. A young Portuguese history professor and her daughter sail from Lisbon to Bombay, tracing the roots of civilization during stopovers in France, Italy, Greece, and Egypt. Three famous women (Catherine Deneuve, Stefania Sandrelli, Irene Papas) join the voyage and dine every night with the American captain (John Malkovich). In some ways this seems naive and archaicespecially the assumption that civilization is basically found north and not south of the Mediterraneanbut it conceals a Bu… Read more »

For those who regard the 2000 presidential contest a stolen election, this 50-minute video documentary by Richard R. Perez and Joan Sekler supplies a dossier of revealing facts about the Florida recount, and those who think George W. Bush won fair and square might well test their convictions against the evidence presented here. The directors are far from disinterestedhow could they be?but their subjectivity is defined more by their trust in democratic institutions than by their party affiliation: Al Gore’s strategy of asking for recounts in only four counties rather than the entire state is deemed both foolish and fatal. Especially telling is the video’s account of how tens of thousands of black voters were illegally but strategically disqualified as convicted felons. Peter Coyote narrates. (JR)… Read more »

Halle Berry plays a psychiatrist specializing in the criminally insane who finds herself incarcerated for an act of criminal insanity in this dopey, violent horror thriller. Director Mathieu Kassovitz and screenwriter Sebastian Gutierrez are so bent on keeping spectators glued to their seats that they don’t mind violating plot or character credibility, a tendency already evident in the opening sequence when Penelope Cruz, as one of Berry’s patients, shifts gears emotionally right in the middle of a monologue. The movie seems equally inclined to natural and supernatural solutions for its mysteries (apparently whichever is closer to hand), and the natural ones are almost as outlandish as the supernatural ones. Robert Downey Jr. supposedly costars, but the dominance of Berry’s action sequences reduces him to a prop. R, 95 min. (JR)… Read more »

I’ve read enough of Stephen King to know that his narrative talent sometimes allows him to break the golden rule of restricting fantasy and horror tales to one fantastic premise apiece. Writer-director Lawrence Kasdan is no slouch as a storyteller either, but in this adaptation of King’s novel, he and cowriter William Goldman managed to lose me almost completely. Thomas Jane, Jason Lee, Damian Lewis, and Timothy Olyphant play four men who gained telepathic powers from a supposedly disabled pal when they were boys and now have to battle a group of alien body snatchers in snowbound Maine. For most of the running time I was confused, as well as mildly nauseated by the gross-out details of a tale that tends to be more slimy than scary. As the complications proliferated (apparently a second alien race has been fighting the first one, and for years Morgan Freeman, a noncomedic military man in black, has been chasing down both groups), I started to shift my focus toward waiting for this elaborate mishmash to end. And believe me, it took a while. With Tom Sizemore, Donnie Wahlberg, and Rosemary Dunsmore. 145 min. (JR)… Read more »

After goofing their way across Singapore (1940) and Zanzibar (1941), Bob Hope and Bing Crosby star in their third colonial-imperialist romp through the third world (1942). Bing sells Bob to a slave trader; watch for Anthony Quinn and Yvonne De Carlo. 83 min. (JR)… Read more »

Except for The Saga of Anatahan, this 1929 release is probably the most underrated of Josef von Sternberg’s sound pictures, and it’s underrated for the same reason: Sternberg is known almost exclusively as a visual stylist, but the most exciting thing here is the highly creative sound track. It’s Sternberg’s first talkiea near remake of Underworld, a spiritual romance about a doomed gangster, with the same lead (George Bancroft) and Fay Wrayand although this is a minority opinion, I find it better than the original in many ways. With Richard Arlen and Tully Marshall. 85 min. (JR)… Read more »

Except for The Saga of Anatahan, this 1929 release is probably the most underrated of Josef von Sternberg’s sound pictures, and it’s underrated for the same reason: Sternberg is known almost exclusively as a visual stylist, but the most exciting thing here is the highly creative sound track. It’s Sternberg’s first talkie–a near remake of Underworld, a spiritual romance about a doomed gangster, with the same lead (George Bancroft) and Fay Wray–and although this is a minority opinion, I find it better than the original in many ways. With Richard Arlen and Tully Marshall. 85 min. An archival 35-millimeter print will be shown. Gene Siskel Film Center.… Read more »

Looney Tunes: Back In Action

Bugs Bunny and Daffy Duck costar with Brendan Fraser (playing the hapless son of superspy Timothy Dalton) and Jenna Elfman (playing a Warners executive who fires Daffy) in this spirited, quintessential, and often hilarious Saturday matinee romp by Joe Dante (Gremlins, Small Soldiers). The movie scavenges from Who Framed Roger Rabbit for its mix of animated and live-action characters and from the Austin Powers movies for its espionage spoof and over-the-top villain (Steve Martin), but actually it’s more indebted to 50s and early-60s pop cinema: Frank Tashlin’s Son of Paleface, Hope and Crosby’s Road to Bali, and assorted cartoon, horror, and SF touchstones of the period (everything from This Island Earth to Psycho), referenced both in Larry Doyle’s script and in peripheral visual details. I had a ball. PG, 90 min. (JR)… Read more »

The idea behind this Exquisite Corpse experiment (2003) is intriguing: using the same cast, 11 separate Chicago crews taped successive segments of this 92-minute narrative, each with only a week to view the previous episode or episodes, then write and shoot the next installment in its own style. There’s some attractive photography in chapter two, bizarre camera angles in three, good acting in five, striking electronic music and color filters in seven, and other felicities along the way. But I found the convoluted storywhich has something to do with a snuff videoalmost impossible to follow until things began to coalesce in the final chapters, by which time I had lost interest. The problem is that the shifting styles and accumulating plot turns become distractions rather than serving the story as a whole. (JR)… Read more »