Grigori Kozintsev and Leonid Trauberg’s exciting, extremely physical 1929 film about the 1871 Paris Commune takes its name from a huge Paris department store at the center of an armed struggle between working-class communards and French soldiers. It’s odd that the movie isn’t as famous as the revolutionary classics of Eisenstein and Pudovkin, because it’s every bit as stirring and richly detailed. (Appropriately, it received a major rerelease in Paris soon after the civil unrest of May 1968.) A large-scale production, it grew out of the groundbreaking Soviet theater-and-film workshop Factory of the Eccentric Actor, better known as FEKS. It’s brutally honest about class hatred, using its lightning-quick montage to clarify the connections between all the characters (ranging from the department store’s proprietor to a shopgirl and from a washerwoman to a soldier), and its dazzling tricks with lighting and focus dramatize Paris’s opulent high life as well as its poverty. 80 min. (JR)… Read more »

The Girl Next Door

Grigori Kozintsev and Leonid Trauberg’s exciting, extremely physical 1929 film about the 1871 Paris Commune takes its name from a huge Paris department store at the center of an armed struggle between working-class communards and French soldiers. It’s odd that the movie isn’t as famous as the revolutionary classics of Eisenstein and Pudovkin, because it’s every bit as stirring and richly detailed. (Appropriately, it received a major rerelease in Paris soon after the civil unrest of May 1968.) A large-scale production, it grew out of the groundbreaking Soviet theater-and-film workshop Factory of the Eccentric Actor, better known as FEKS. It’s brutally honest about class hatred, using its lightning-quick montage to clarify the connections between all the characters (ranging from the department store’s proprietor to a shopgirl and from a washerwoman to a soldier), and its dazzling tricks with lighting and focus dramatize Paris’s opulent high life as well as its poverty. In Russian with subtitles. 80 min. A 35-millimeter print will be shown; David Drazin will provide live piano accompaniment. Gene Siskel Film Center.… Read more »

Chronicle Of The Years Of Embers

Mohammed Lakhdar-Hamina’s 1975 Algerian feature in ‘Scope, about a peasant joining the Algerian war of independence, won the Palme d’Or at Cannes but has seldom been seen or discussed since. In Arabic with subtitles. 177 min. (JR)… Read more »

Initially shot in 16-millimeter between 1957 and ’59, periodically expanded and updated over the following decades, and completed last year on video in a six-and-a-half-hour final version, Ken Jacobs’s magnum opus of political protest is made of the same basic ingredients as the rest of his oeuvre: beautifully shot scenes of cavorting friends and comrades (including Jerry Sims, a pre-Flaming Creatures Jack Smith, and some recent anti-Bush protesters) and found footage (including most of Nixon’s Checkers speech, campaign propaganda for Nelson Rockefeller, a fatuously racist documentary about Africa, and Al Jolson in blackface). Semi-indigestible by design, this nonetheless steadily builds in political and historical resonance. (JR)… Read more »

Not to be confused with Lizzie Borden’s 1987 feature about New York prostitutes, although Dorothy Arzner’s brazen 1931 drama about two small-town sisters (Dorothy Hall and Judith Wood) looking for jobs and men in the big city sometimes makes a few parallel feminist observations. The dumbness of Hall’s character gets laid on with a trowel at times (Aw, you don’t have to speak so sarcasmly, she says at one point), and the movie never seems to make up its mind whether the European intellectual (Paul Lukas) who hires her as a secretary is predatory or a patsy. But the Depression atmosphere is indelible. With Charles Buddy Rogers. 77 min. (JR)… Read more »

A former U.S. president (Gene Hackman) returns to his small hometown in Maine and runs for mayor against a local plumber (Ray Romano). According to this amiable, archaic, conventionally deceitful piece of Capracorn (directed by Donald Petrie from a script by Tom Schulman and story by Doug Richardson) local yokels and ex-presidents are brothers under the skin, equally in need of a good woman (Marcia Gay Harden and Maura Tierney in this instance) to set them on the straight and narrow path. Tierney and Hackman contribute most to keeping this life-size and funny. With Christine Baranski and Rip Torn. PG-13, 115 min. (JR)… Read more »

Meg Ryan capably plays what appears to be an idealized version of boxing promoter Jackie Kallen in a drama directed by Charles Dutton from a script by Cheryl Edwards. The story focuses on the first fighter the heroine promotes (reportedly a composite character), played by Omar Epps. I’m not a fan of the sport, but the boxing sequences held me and the overall atmosphere seems reasonably authentic. The treatment of Kallen’s gender battles should have been just as interesting, but here the dramatic developments are less clearly and effectively defined, and the character is ultimately a cipher; some early glimpses of Kallen as a little girl are especially unconvincing. With Tony Shalhoub. PG-13, 110 min. (JR)… Read more »

The Best Of The Shorts

Cuteness and sentimentality mar Daniel Gamburg’s Tsipa & Volf (2000, 25 min.), a home-movie-like portrait of a Jewish-Russian couple who’ve been together for half a century (which I only sampled), as well as Ryo Hayashi’s fictional short Useless (2000, 14 min.), about a Japanese insurance worker who’s retiring. But the three other works on this program refreshingly avoid such pitfalls: Jophi Ries’s Always (1999, 14 min.), a subtle German fiction short about another long-term marriage; Jennifer Petrucelli’s Inside/Out (2000, 8 min.), an affecting documentary about a woman whose face is half-paralyzed; and Scott Catolico’s silly but spirited Canadian jaunt Smoking Can Kill You (1999, 5 min.). (JR)… Read more »

On the eve of the May 1968 demonstrations in Paris, a young American film freak (Michael Pitt) meets a vaguely incestuous French brother and sister (Louis Garrel and Eva Green) at the Cinematheque Francais and gets drawn into their perverse games, which involve sex as well as cinephilia. Less sexy, believable, literary, and transgressive than Gilbert Adair’s 1988 source novel The Holy Innocents, which he adapted for director Bernardo Bertolucci, this watchable if far-fetched movie (2003) is seriously marred by its three leads; only Garrel manages to suggest a person rather than a fashion model dutifully following instructions. And ironically, despite the nudity that provoked an NC-17 rating, the film suffers from its own censorship of the novel’s homosexual elements. 115 min. (JR)… Read more » 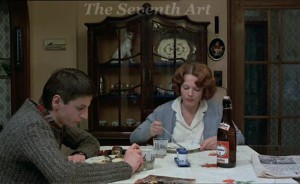 A group of Russian farmers discover that their land has been sold for oil excavation without their knowledge and go on a rampage of torture and killing to extract more information from party officials. This grim, phantasmagoric view of recent and not-so-recent Russian history (1998, 95 min.), directed by the late Petr Lutsik, has the same Russian title as Boris Barnet’s first sound film, Okraina, and is showing as part of Facets Cinematheque’s Barnet retrospective, though it has little thematic, stylistic, or formal relation to that masterpiece. Critic Ray Privett’s comparison of the film with Dead Man comes closer to the mark, at least regarding the striking black-and-white cinematography, the slow fade-outs, and the gallows humor about land grabbing and rustic violence. In Russian with subtitles. (JR)… Read more »

The Girl With The Hat Box

The first solo feature of Russian filmmaker Boris Barnet, this charming slapstick comedy (1927, 70 min.) stars Anna Sten, a subsequent Samuel Goldwyn discovery, as the title heroine, who lives with her grandmother in the snow-blanketed sticks, works at a hat shop in the city, and spends much of her time fleeing a lovesick suitor. Some commentators have linked Barnet to Chaplin because of his pathos and his sense of physicality, a connection this feature makes especially clear. (JR)… Read more » 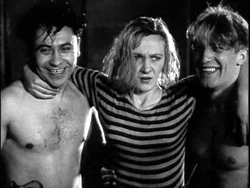 One of the very best features of the neglected Russian filmmaker Boris Barnet, this 1935 feature is, like some of his other talkies, a glorious musical of sorts. Codirected by S. Mardanov, it’s about two buddies, a sailor and a mechanic, who, shipwrecked on an island in Soviet Azerbaijan, both try to woo the same young woman, who runs a fishing co-op. Though seemingly light, it’s as intensely physical as Barnet’s preceding masterpiece, Okraina, and its melancholic undertow makes it distinctly different from the early sound comedies of Raoul Walsh that it sometimes resembles. In Russian with subtitles. 71 min. (JR)… Read more »

The first sound film by Boris Barnet, one of the least seen and appreciated masters of the Russian cinema, this 1933 feature follows the impact of World War I on a village. Barnet takes nothing for granted, using sound as no one else had before or since and in the process reinventing the way we experience silence as well as sound. His view of war is expressed in uncanny emotional registers: scenes that begin tragically end comically and vice versa, and one of the more touching story lines involves a woman who falls in love with a German prisoner. Adapted by Barnet and Konstantin Finn from Finn’s novel, this is strong and indelible. In Russian with subtitles. 98 min. (JR)… Read more »