Popcorn Punditry [THE DAY AFTER TOMORROW] 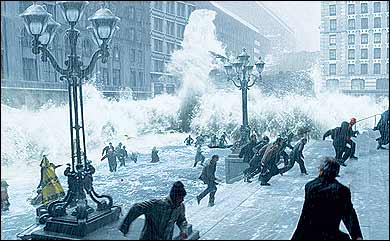 Written by Emmerich and Jeffrey Nachmanoff

Roland Emmerich’s latest summer blockbuster is an exceptionally stupid movie. Of course the consensus is that summer blockbusters, even ones that come out in the spring, are supposed to be stupid. But occasionally a summer blockbuster is also expected to offer some food for thought. The Day After Tomorrow, the latest big-budget SF disaster flick, broaches — or stumbles over — the issue of global warming, or what I prefer to call Bush weather, a topic that’s surely worthy of some reflection.

Al Gore declared that this movie was at least an honest fiction about global warming — unlike the fictions about the subject emanating from the White House. Using a stupid movie to call attention to a serious problem put him in a less-than-dignified position, but if he hadn’t tied his arguments to a stupid movie the news media might well have ignored him. 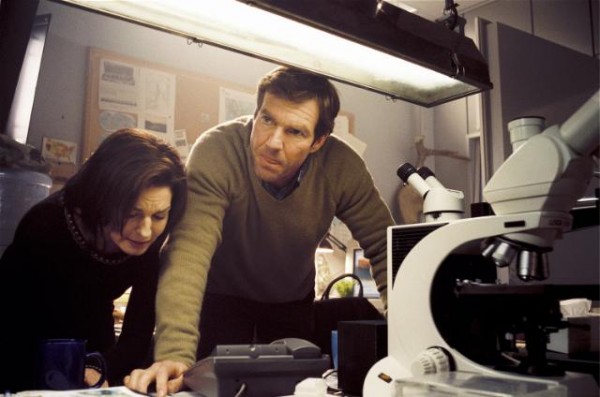 When JFK came out in 1991, all of a sudden, decades after the event, the New York Times and other papers decided the assassination of John F. Kennedy was front-page news again.

It wasn’t because Oliver Stone’s scholarship surpassed that of his predecessors. It was because a major studio, Warners, had decided to make a big deal out of it. Now Fox is making a big deal out of the end of the world as we and Gore know it, and suddenly it’s newsworthy. Dignified by the fantasies of Emmerich, global warming now merits scientific panels and sound bites from TV pundits. If Rupert Murdoch wants to make some coin being an environmentalist, I guess we’d better sit up and pay attention.

Global warming may be real, but the string of disasters we see in this movie — earthquakes, tornadoes, melting ice caps, hailstones the size of grapefruits falling on Tokyo and knocking cell phones out of people’s hands, a tidal wave engulfing Manhattan and then freezing — are made to seem less real than movie-worthy, meaning both fun and unreal. Apparently one great danger of global warming is that it might allow some wolves in a New York City zoo to escape and chase teenagers through a Russian ship that’s stranded somewhere around Fifth Avenue and 42nd Street.

But the end of civilization as we know it, even if it’s fun and silly, isn’t the first order of business. What really matters is that an ace paleoclimatologist (Dennis Quaid), assisted by courageous colleagues, has the opportunity to make up for being a negligent father by driving and walking through snowdrifts and icy temperatures all the way from Washington, D.C., to Manhattan to rescue his son (Jake Gyllenhaal). The son is trapped with the movie’s romantic interest (Emmy Rossum) and a few others in the New York Public Library, where they’re burning books to stay warm. The Day After Tomorrow abounds with such jokey ironies, including Americans in the southern half of the U.S. fleeing to safety across the Mexican border and winding up in refugee camps.

At one point a White House official declares, “We were wrong — I was wrong” for not taking global warming seriously. But I’m not sure this movie, even with Gore’s wishful spin, will be a blow to Bush’s reelection. Its comic-book dramaturgy and shorthand geography simplify environmental issues even more than the Bush administration does, and its motive is the same — profit. This ice age gets under two hours of screen time, and we see only the U.S., a bit of Mexico (Canada is virtually overlooked), a Scottish weather station, a snippet of New Delhi, and a tiny snowscape glimpsed from a satellite that’s identified as “Europe.” (Eight years ago Emmerich’s Independence Day was nearly as hamstrung in its efforts to encapsulate the planet, most often reaching back to nationalistic stereotypes from the 50s.)

The movie does acknowledge a big problem and warns us that things could get worse — which could be seen as a significant step forward for American pop media. Yet it’s not clear whether we’re supposed to take the theme seriously and scoff at the treatment or the other way around — assuming we don’t scoff at both. I guess it depends on who you’re voting for. 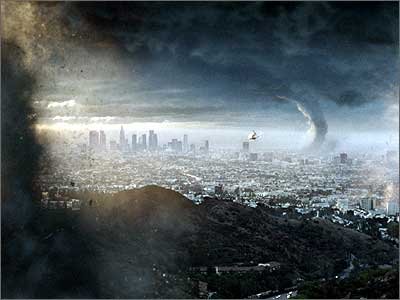