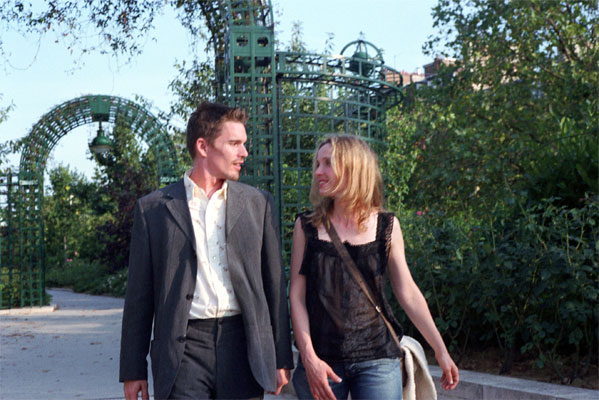 Future generations may look back at Linklater and Wong as poets laureate of the turn of the century who excelled at catching the tenor of their times. In Days of Being Wild and Slacker, Ashes of Time and The Newton Boys, Happy Together and Dazed and Confused, and In the Mood for Love and Before Sunrise they’re especially astute observers of where and who we are in history.… Read more »

Rene Clair’s 1931 satire on industrialization was overshadowed for many years by Chaplin’s Modern Times and then forgotten, though its recent release on DVD has given it a secondand well-deservedlease on life. Like Clair’s lesser known and somewhat better Under the Roofs of Paris (1930), it experiments with the new sound process, and its proletarian plot (two convicts go free, one becoming a tramp, the other acquiring a phonograph factory) makes it a period piece in the best sense. In French with subtitles. 97 min. (JR)… Read more »

Jesse (Ethan Hawke) and Celine (Julie Delpy), the young American man and French woman who met on a train and spent the day together in Vienna in Richard Linklater’s Before Sunrise (1995), run into each other again nine years later, this time in Paris. What we see of their reunion unfolds in real time and lasts only 80 minutes, but it’s so concentrated that the film is about the previous nine years as much as the breathless present. You won’t need to have seen the earlier film to enjoy this to the utmost; in its performances, direction, and script (by Linklater, Kim Krizan, and the two actors), it’s so perfectly conceived and executed that you may be hanging on every word and gesture. Just as romantic and compelling as the first film, this is a beautiful commentary on what might be described as nostalgia for the present. Reviewed this week in Section One. Century 12 and CineArts 6, Landmark’s Century Centre.… Read more »