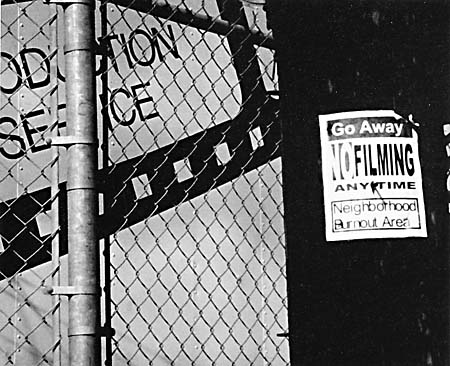 Directed and Written by Thom Andersen

I think there’s this weird thing at work now with the way people relate to, specifically, mainstream cinema. When they watch those movies they like to be on the receiving end. . . . The sound is so loud, and the images are so powerful, they want to be totally passive. But then, a few months later, the same film is on DVD, and they can watch it and they own it. And the relationship is inverted. They own that moment, that scene. They also control that diverse, complex relationship they have with film actors. They can watch this or that in slow motion or image by image. — Olivier Assayas in a 2003 interview

The paradigmatic shift in moviegoing described above is fundamental, profoundly altering what we mean by film history as well as film criticism. But if you keep your focus trained on theatrical releases, and regard the subsequent surfacing of the same items on video and DVD only as faint echoes, you’re less likely to be aware of what’s been happening lately, which is in fact affecting the entire corpus of cinema and our access to it.… Read more »

An agile thief (Parviz Parastoie) escapes from an Iranian prison in the stolen garb of an Islamic cleric, but while he’s waiting to secure a passport he begins to draw followers, and the ensuing complications make him wonder whether prison was so bad after all. With its earthy, populist blasphemy, this satire by Kamal Tabrizi won the audience prize at the Fajr film festival and was subsequently banned, though neither development should come as any surprise. Most of the laughs are pretty obvious, but a few gags (a television cleric holding forth on the religious wisdom of Pulp Fiction) are endearingly wacky. In Farsi with subtitles. 115 min. (JR)… Read more »

Chris Smith and Sarah Price (the cocreators of American Movie) and Dan Ollman chronicle the inspired and highly educational pranks of Andy Bichlbaum and Mike Bonnano, who pose as representatives of the World Trade Organization on the Web, on television, and at big-time international conferences. Their easygoing conviction fools everyone, even when they sing the praises of shitburgers, propose selling votes for profit, or unveil a grotesque worker’s suit with a pop-up penis containing a surveillance camera. More good-natured than Michael Moore, these guys score by raising the issue of just how much their amateur antics exaggerate the neocon principles of the WTO. R, 83 min. a Landmark’s Century Centre.… Read more »

This brilliant and often hilarious 2003 essay film by Thom Andersen (Eadweard Muybridge, Zoopraxographer) assembles clips from 191 movies set in Los Angeles, juxtaposing their fantasies with the real city as seen by a loyal and well-informed native. That might sound like a slender premise for 169 minutes, but after five viewings I still feel I’ve only scratched the surface of this epic meditation. Andersen focuses on the city’s people and architecture, but his wisecracking discourse is broad enough to encompass a wealth of local folklore, a bittersweet tribute to car culture, a critical history of mass transit in southern California, and a song of nostalgia for lost neighborhoods and lifestyles. Absorbing and revelatory, this is film criticism of the highest order. To be projected from Beta SP video, with a ten-minute intermission. Gene Siskel Film Center.… Read more »