The Most Intelligent American Movie of the Year [THE BIG RED ONE: THE RECONSTRUCTION] 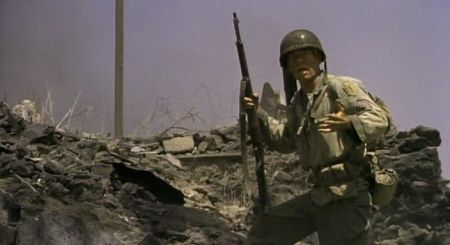 The Big Red One: The Reconstruction

Directed and Written by Samuel Fuller 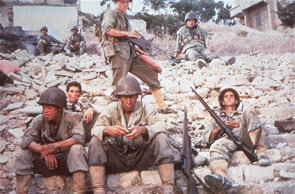 “When I enter his suite at the Plaza, he’s finishing lunch, expressing his regret about missing Godard in Cannes, remarking on the absurdity of prizes at film festivals, asking me what Soho News and Soho are. (The one he knows about is in London — he fondly recalls a cigar store on Frith Street.)

“It isn’t hard to figure out why Mark Hamill affectionately calls him Yosemite Sam, or why Lee Marvin simply says he’s D.W. Griffith. Bursting with the same charismatic, comic book energy that skyrockets through most of his movies, old crime reporter, novelist, war hero, writer-director and sometime producer Samuel Fuller, almost 69, still moves and talks like his daffy action flicks — like the wild man from Borneo — in quick, short, blocky punches, like two-fisted slabs of socko headline type.”

The purple prose was mine, the year was 1980. Fuller was promoting his semiautobiographical war picture The Big Red One, even though the studio had just cut half of it — something he wasn’t making any effort to hide. It had also added an offscreen narration he didn’t like, spoken by the character based on him and written by (though not credited to) filmmaker Jim McBride. Fuller’s own two versions had no narration. His first cut was 260 minutes, his second two hours. “Second cut they hated,” he told me. “They wanted the elements of the four hours and 20 minutes. Sizewise, impossible. In my cut I took out sequences — I don’t circumcise or shorten scenes. That’s when they hit the ceiling.”

It was the first time I’d met him, and seven years would pass before our next encounter. By then I was an academic preparing to move from the University of California at Santa Barbara to Chicago to start writing for this paper. I was running UCSB’s summer school in film studies and invited Fuller to fly over from Paris, where he was then living, to serve as our artist in residence. Every course showed at least one of his films and received him as a visitor once during his nine days on campus. Each night my colleagues and I took him to a restaurant and listened to his stories until closing time. Then he and I flew to Berkeley for a couple of days so I could interview him at the Pacific Film Archive before he returned to Paris.

We stayed in touch over the remaining decade of his life — he died in 1997 — and I dedicated my book Movies as Politics to him. That’s why I can’t regard dispassionately film critic Richard Schickel’s effort to reassemble Fuller’s version of The Big Red One. 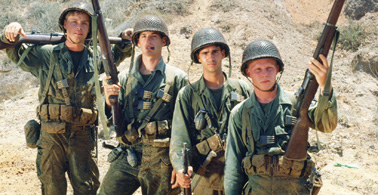 Schickel and producer Brian Jamieson recovered as much of Fuller’s footage as they could — some of the cut footage had been lost — and they had his script. Their 163-minute film isn’t so much a restoration of either of Fuller’s versions as a more thoughtful and nuanced reworking of the 113-minute release. Reading the script, I suspected that “four hours and 20 minutes” was an exaggeration — more a reflection of the ideal cut in Fuller’s mind than what he’d edited the work down to, which was probably closer to three hours. His novel of the same title, which he wrote just before the script, provides another indication of his intentions. We also have his posthumously published autobiography, A Third Face: My Tale of Writing, Fighting, and Filmmaking (just out in paperback), which is an account of the real experiences that inspired the novel and script. 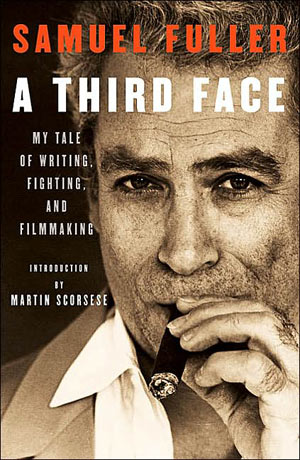 In that book Fuller wrote, “I was driven to turn my wartime experiences into a movie in order to convey the physical and mental upheaval of men at war. That’s how I ultimately came to grips with my experiences. Tactics, strategy, troop movements on maps were for military historians. My screenplay reduced the war to a small squad of First Division soldiers — a veteran sergeant and four young dogfaces — and their emotions in wartime. Each fictional character was an amalgam of real soldiers I’d known.” One of the dogfaces, Zab, played by Robert Carradine, is a transparent stand-in for Fuller. 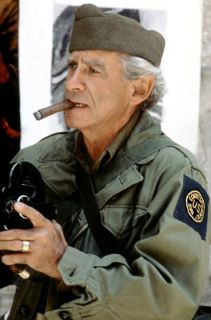 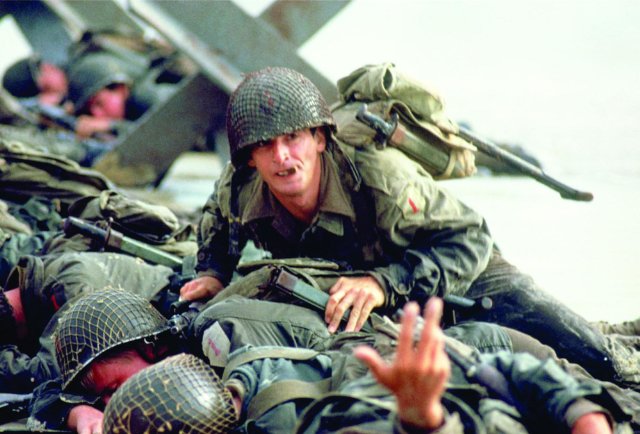 Later in the book Fuller wrote, “During the final months of [script] revision, [my wife] Christa told me I’d have terrible nightmares, screaming out unintelligible phrases in the middle of the night.” He also revealed that he’d had these nightmares about his combat experiences for much of his life. He often spoke about those experiences to friends, but as far as I know, he never spoke about the nightmares.

A man who combined a profoundly pessimistic view of mankind with a singular gusto for life, Fuller was often misunderstood by people who had only his ambiguous movies and their frequently oafish heroes to go by. He was labeled primitive, right-wing, racist, and warmongering, even though he was left-wing, antiracist, and antiwar. He was almost never described as a working-class street kid, though that was by far a more accurate label, even when he was in his 70s and 80s. (The numerous war orphans who turn up in The Big Red One — especially in the longer version, one of them played by his daughter Samantha — capture his wide-eyed innocence better than any of the grown-ups.) In spite of all his well-earned military decorations, he thought a war movie that might make someone want to enlist was morally suspect, regardless of the cause. He was pleased that when 700 Pentagon officers, including General George Patton, son of the World War II general, saw The Big Red One, Patton complained, “It has no recruitment flavor.” When Fuller visited Santa Barbara, the Iran-contra hearings were in progress, and he scoffed at Oliver North and his fatuous patriotism.

Fuller’s life can be divided fairly neatly into three phases. He started selling papers on the street at age 12, became a copyboy, and was a crime reporter until he enlisted in the army at 29. He served four years in a Big Red One rifle squad, an elite unit distinguished by a red stripe worn on the shoulder, then spent 40-odd years making movies. It’s telling that the four years in the military fill many more pages of A Third Face than his childhood and his 17 years in journalism combined. 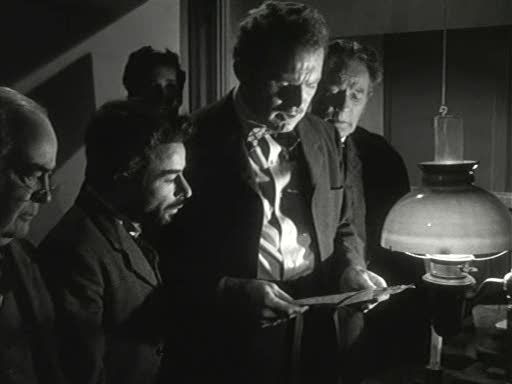 His journalistic career is indirectly but splendidly celebrated in his favorite of his completed features, Park Row (1952), a crowded history of journalism in lower Manhattan during the 1880s that features a cigar-smoking editor (Gene Evans) who runs his paper like a rifle squad. Shot on a paltry budget, which came out of Fuller’s own pocket, it was a disaster at the box office, but he never regretted making it. (This rough jewel rarely turns up, but it’s showing this Saturday at the LaSalle Bank Cinema.)

Fuller’s stint in the Big Red One took him to North Africa, Sicily, England, France, Belgium, Germany, and Czechoslovakia, where he helped liberate a concentration camp in Falkenau and shot his first film footage, on a 16-millimeter camera. His experiences were too various, extreme, and traumatic to be contained in a single feature, particularly given that he wanted to move beyond his combat unit and include scenes with French and German characters, underlining the idea that all soldiers are in the same boat. In The Big Red One he was obsessed, as he was elsewhere, with the moment when a treaty is signed, when what was formerly deemed killing becomes murder — a reality he highlights in the black-and-white prologue devoted to the end of World War I as perceived by Lee Marvin’s character, known only as the Sergeant.

As a consequence, The Big Red One — despite all the framing devices and self-imposed conceptual limitations, such as the decision to omit basic training and flashbacks to home life — comes across a bit more as a compendium than as a single story. Adding to that impression are the bold stylistic shifts from realism to surrealism, from action to horror to lyricism to black comedy to allegory and back again. Similar shifts characterize most of Fuller’s late films as well as his 1980 novel, which veers from quaint in-jokes — such as naming all the French officers after French film critics who championed his earlier movies, including (Luc) Moullet, (Bertrand) Tavernier, and (Henri) Chapier — to terse epigraphs that suggest the dark poetry of someone like Lautréamont: “‘Why are you crying?’ [says] an insane child to a burning tank.”

In The Big Red One Marvin’s sergeant is an allegorical death figure, a benign yet gruff surrogate father to the dogfaces (much like Fuller), a comic straight man, an action hero, a device for spouting diverse kinds of information, and an almost documentary rendition of a soldier repressing emotion under stress. (It’s only in the longer version of the film that the performance given by Marvin, who also saw combat, registers as one of his best.) Even some of the film’s single images have an eerie way of serving double or triple duty. One of the most vivid recurring ones — close-ups of a wristwatch on a corpse lapped by waves at Omaha Beach on D-day — seems like it could have come directly out of one of Fuller’s nightmares, yet it also registers as painfully real rather than simply imagined. 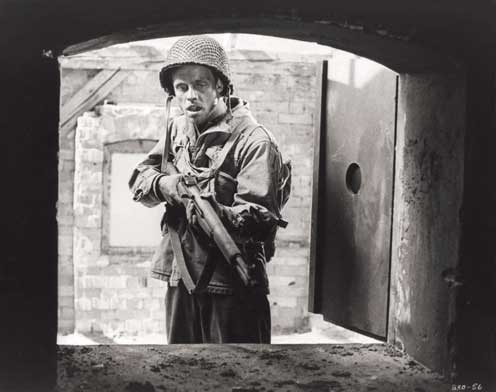 When I was interviewing Schickel at a screening of this film in October at the Chicago International Film Festival, I discovered that we had radically different readings of a highly disturbing sequence set in Falkenau, where the character played by Mark Hamill can be seen maniacally firing his rifle at a silent, unseen target inside a seemingly empty crematorium. The target briefly becomes a soldier with a machine gun in a foxhole. Schickel interpreted that as realistic. I saw it as a crazed hallucination. The film’s pendulumlike swings between a documentary sense of reality and an overall mood of fantasy inevitably produce eerie moments when it’s difficult to tell them apart.

Schickel’s cut is incomparably better than the 1980 release, though it only reduces rather than eliminates the offscreen narration Fuller objected to. There are defensible reasons for keeping it, such as making the action easier to follow and identify with, but I can’t help wondering what conceptual aspects of the original it obscures. I wouldn’t call even this version Fuller’s best film, though in some ways it’s the richest; the New York Times‘s A.O. Scott rightly calls it a “messy, muscular masterpiece.” I also wouldn’t call it his best war film; to my mind that’s the first one he did, The Steel Helmet (1950), shot in only ten days and dealing with a war he never fought in, the one that was going on in Korea. 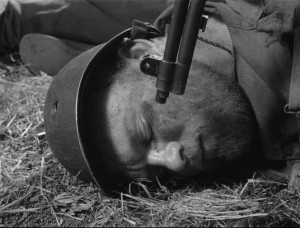 The Big Red One simmered in Fuller’s brain for at least three decades, and he always regarded it as his magnum opus. It can’t contain all his ambitions, which must have accumulated over the years in layers, some of them contradictory — which may account in part for the film’s stylistic shifts. In 1980 I concluded in my review for the Soho News that this 50s war movie might be something of an antique, but it was “also the most intelligent American movie in any genre I’ve seen this year.” Encountering a much longer version a quarter century later, I find it looks less like an antique, and its eccentricities now seem timeless: few American directors in the 50s were quite as allegorical or as surrealist as Fuller. And if a more intelligent and, yes, contemporary American movie has been released this year, I haven’t seen it. 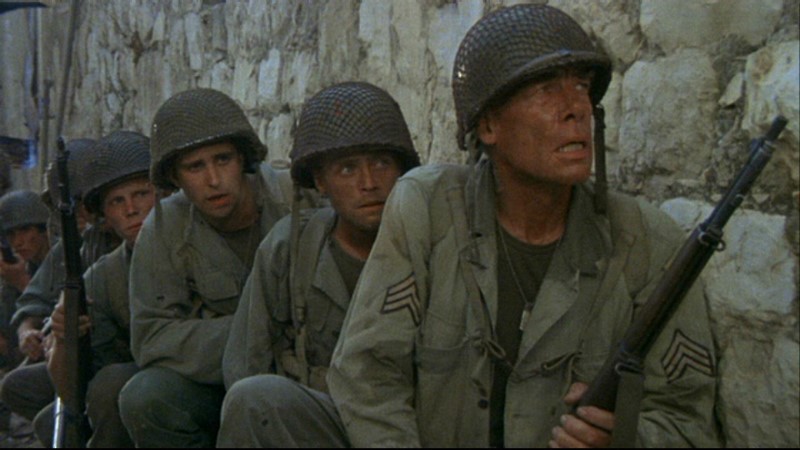