From the Chicago Reader (January 21, 2005). Alas, I’ve never been any sort of Shakespearean scholar, and if I’d read the devastating take-down of this film by Ron Rosenbaum (no relation) in The Shakespeare Wars, published the following year, I’m sure I would have been far less tolerant….It’s worth adding, however, that Ron Rosenbaum isn’t any sort of Orson Welles scholar when he accepts the 1997 version of his Othello as a “restored” version — or when countless other commentators call the 2014 perpetuation of that version, with Welles’ own choices of music and sound effects replaced by uninformed simulations, any sort of “restoration”. (As things stand today, Welles’ own version of Othello – that is to say, with his own soundtrack — has been thoroughly suppressed.)   — J.R. 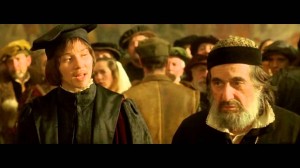 Director Michael Radford (Nineteen Eighty-Four, Il postino) begins his adaptation of the Shakespeare play with a precise date and a brief documentary about anti-Semitism in 16th-century Venice; this doesn’t have much to do with the playwright or his audience, but it provides a social context for what follows. Al Pacino avoids his usual bombast, giving his Shylock some shading, and Jeremy Irons is fine as Shylock’s legal opponent, Antonio. Overall this is an intelligent and thoughtful reading of the play, marred only by the implausibility of Portia (Lynn Collins) fooling everyone at the trial with her gender disguise — which, of course, is transparent. With Joseph Fiennes. R, 127 min. (JR) 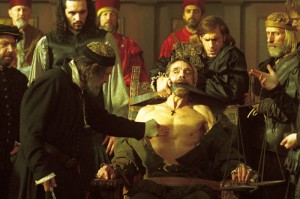