Diary Of A Mad Black Woman

Playwright-actor-producer Tyler Perrya star of the so-called chitlin’ circuit, with eight shows currently credited to himadapts one of his hits for the big screen, directed by Darren R. Grant. The title heroine (Kimberly Elise)who’s angry, not crazyis dumped by her rich attorney husband (Steve Harris) for a white bimbo after 18 years of marriage; eventually she gets even and finds both true love (Shemar Moore) and her soul’s salvation. Perry plays her battle-ax grandmother Madea (featured in several Perry shows) as well as Madea’s lecherous brother and his upstanding son, and Cicely Tyson plays her mother. The stylistic discontinuities and pile-driver excesses can be off-putting for an outsider like me, but for fans this may well be part of the appeal. PG-13, 116 min. (JR)… Read more »

This gothic jigsaw puzzle, directed by John Maybury (Love Is the Devil) from a script by many hands, promises to be another Jacob’s Ladder but doesn’t deliver. Maybury’s art-world talents don’t include storytelling, and his visceral bursts of fast editing and extreme close-ups don’t yield any full-blown characters, narrative, or political vision (though I could swear I heard Noam Chomsky’s voice briefly coming from a TV). Leapfrogging between 1992 and 2007 and between fantasy and reality, the plot concerns an American GI (Adrien Brody) who nearly dies from a head wound during the first gulf war, gets framed for the murder of a cop back in his native Vermont, and winds up in a hospital for the criminally insane, where an evil shrink (Kris Kristofferson) performs hideous experiments on him. With Keira Knightley, Jennifer Jason Leigh, Kelly Lynch, and music by Brian Eno. The executive producers include George Clooney and Steven Soderberghmaybe they can explain what’s going on. R, 104 min. (JR)… Read more » 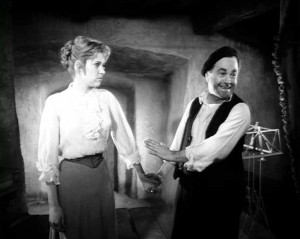 The 1957 film that established Stanley Kubrick’s reputation, adapted by Kubrick, Calder Willingham, and Jim Thompson from Humphrey Cobb’s novel about French soldiers being tried for cowardice during World War I. Corrosively antiwar in its treatment of the corruption and incompetence of military commanders, it’s far from pacifist in spirit, and Kirk Douglas’s strong and angry performance as the officer defending the unjustly charged soldiers perfectly contains this contradiction. The remaining cast is equally resourceful and interesting: Adolphe Menjou, George Macready, Wayne Morris, Ralph Meeker, and the creepy Timothy Carey, giving perhaps his best performance. Banned in France for 18 years, this masterpiece still packs a wallop, though nothing in it is as simple as it may first appear; audiences are still arguing about the final sequence, which has been characterized as everything from a sentimental cop-out to the ultimate cynical twist. 86 min. A restored print will be shown. Music Box. 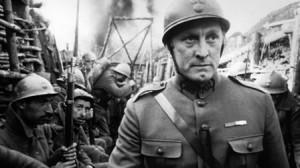