Diary of a Mad Black Woman

If memory serves, the following review, written in mid-February 2005, is the only submitted film review  I ever wrote for the Chicago Reader during my more than 20 years on the staff which the paper’s editor chose not to run. I’m posting it now not in order to contest in any way her judgment in this matter — given the possible unwitting offense that this short article might have caused, it was probably sound — but for the (admittedly limited) documentary interest of such a review in its own right.  For the record, my capsule review of the same movie appeared in the Reader on February 25, 2005. — J.R. 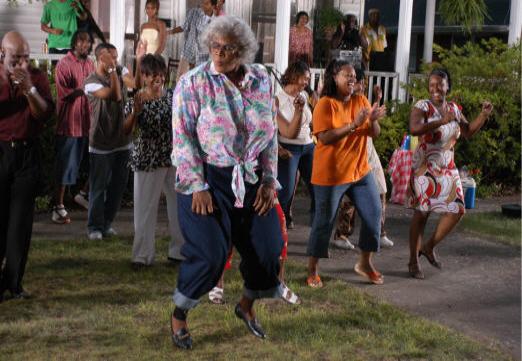 Once I started recovering from the shock of the hyperbolic jive of Diary of a Mad Black Woman, I had the the sensation I’d just been eavesdropping on a subculture and a franchise I previously knew nothing about —–a discourse in which a particular audience was being knowingly stroked, serviced, and gratified. As playwright, producer, performer, and sometime director, Tyler Perry belongs to that branch of ethnic theater scornfully known as the “Chitlin Circuit,” aimed almost exclusively at black audiences. (His web site, citing this “insulting” nomenclature, notes that the preferred and more “respectable” title for this genre is “Urban Theater”.) One of the novelties of this kind of comedy-drama is its capacity to exploit certain black stereotypes that no other kind of film or theater could get away with. Another is to pile many of these stereotypes on top of one another—even when they seem to belong, stylistically and conceptually, on separate planets.

More interesting as part of a phenomenon than as a movie in its own right, Tyler Perry’s film version of his highly successful touring play might be regarded as the next logical step after the DVD and VHS copies of an Atlanta performance recorded four years ago (selling respectively for $25 and $20 on Tyler’s web site), the soundtrack CD ($10), the T-shirt ($15), the bathrobe ($60), the “medal (sic) bound diary” with blank pages which comes “with a black Tyler Perry Pen” ($15), or the last two items combined in a separate package ($70)—–which doesn’t include the similar merchandise tied to half a dozen other Perry plays or the “promotional items” on sale that are distinct from all the above. Check out the 63 reviews of the DVD posted by fans—–all of them heartfelt five-star raves, well over half of them by women—–and it immediately becomes clear that Perry is speaking directly to a lot of people and scoring in a very personal way with them. 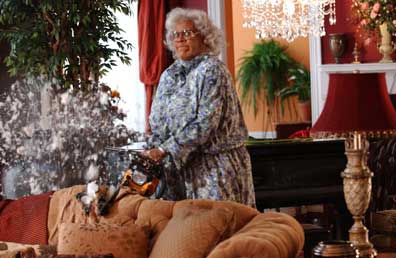 I suspect his inspirational rags-to-riches story with its aura of religious and therapeutic self-fulfillment comprises part of his appeal, having gone from an unsuccessful playwright living out of his car to a 35-year-old multimillionaire in only six years. A New Orleans native, he wrote a series of letters to himself in 1992—–possibly an early template for the “mad woman”’s diary-—-about his survival of childhood abuse. This was subsequently transformed into a musical called I Know I’ve Been Changed that went from attracting only 30 Atlanta customers during its first weekend to becoming a smash hit at the House of Blues and then the 9,000-seat Fox Theater in 1998, before going on tour. Today his web site lists eight separate shows, two of them (Meet the Browns and Madea Goes to Jail) currently touring.

What do I mean by the hyperbolic jive of Diary of a Mad Black Woman? The title heroine and narrator, Helen McCarter (Kimberly Elise)—–who, incidentally, is “mad” in the sense of being angry, not crazy-—- has been married for 18 years to Charles McCarter (Steve Harris), a successful Atlanta attorney. He’s so successful, in fact, that “mansion” seems inadequate to describe where they live; “palace” comes closer to the mark. She suspects he’s having an affair, which already seems plausible when we see how curtly he avoids her, ignores her questions, and insults her, and soon becomes confirmed when he tactlessly celebrates their 18th anniversary by ordering a mover to pack all her belongings in a van, brazenly comes home with his white mistress in tow (a gold-digger and a sleazebag),  literally drags Helen out of the house screaming, and then promptly changes all the locks.

If this sounds a shade overdone, it’s stylistically subdued next to the behavior of Helen’s raucous and commanding grandmother, Madea—played by Perry himself in drag—especially after she hears what’s happened. (In the manner of Eddie Murphy shtick, Perry also plays Madea’s horny and vulgar older brother Adam in overalls and the “straight” part of his upstanding son Brian, another attorney. There’s something touching about the movie’s decision to eschew digital trickery and isolate these  characters in separate shots, even when all three of them are in the same room.) It’s with the appearance of Madea  that I first felt like I was eavesdropping, for she figures like the continuation of a running gag that started long before this particular movie. (Three of the eight Perry-produced shows have her name in the title.) Trying to inspire some healthy rage in her granddaughter, she brings  Helen back to the McCarter palace and helps her rip the mistress’s lavish wardrobe in Helen’s former bedroom to shreds before attacking the living- room furniture with a chainsaw (which conveniently materializes for Madea’s perusal out of nowhere), making the argument that because of Helen’s 18 years of housework, she’s entitled to half of everything.

Part of what’s off-putting about this movie’s many gear changes, at least to outsiders like myself, are the discontinuities of tone and style as it moves from character to character and from incident to incident—– though this is likely part of the kick for the audience it’s designed for. (Maybe Madea and Adam belong in the same movie, but this is hardly the same one that’s occupied by Helen and Charles.) The emotional gamut that’s run is also pretty wide: when Helen eventually finds true love with Orlando (Shemar Moore), the mover who formerly packed all her belongings in the van-—-a handsome, sensitive hero, a veritable knight in shining armor who boasts an excellent collection of headbands (“Dear Diary, this man is fine”)—–their dreamy courtship is worlds apart from the naturalistic subplot of Brian’s estranged and drug-addicted wife Debrah (Tamara Taylor), which reeks of abject misery and despair. Then there’s the sudden, melodramatic shooting of Charles by a gangster client of his in a courtroom that leaves him completely paralyzed—–and implausibly persuades Helen to drop her boyfriend like a hot potato in order to take care of her estranged husband. (His evil mistress has meanwhile cleaned out his bank account and split.) Yet this turnaround is followed by Helen’s sadistic abuse of Charles as payback for her former humiliation once she moves back into the palace with him (replicating the scenario of Roman Polanski’s Bitter Moon in several harrowing particulars). And then the s & m interlude becomes succeeded—and seemingly negated in turn—by the crucial role of the church at the 11th hour in saving and reforming Charles, Helen, and even Debrah, at which point the movie turns into a joyous gospel musical.

Admittedly, Christianity already made a cameo appearance somewhat earlier–long enough, at least, to introduce the lively gospel music and further the sub-subplot of Debrah’s daughter, who sings at the church. But it wasn’t around long enough to become a featured player in the story, much less a deus ex machina that could sort out all the characters’ problems at the end. It seems that both the appeal and the confusion of Perry’s method is to reflect and resolve the disorder of many black lives, economically, emotionally, and spiritually, as the characters tangle with the intangibles of rejection and acceptance, failure and success. 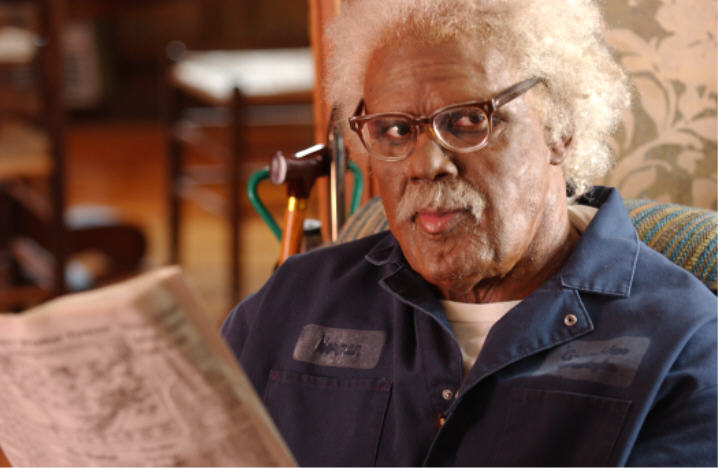