The Death Of Mr. Lazarescu

The last day and night in the life of a cranky, ailing 63-year-old widower in the Bucharest suburbs, with an ambulance carting him from one overtaxed hospital to another, may sound like an ordeal, but this 154-minute Romanian odyssey (2005) is anything but. Both sad and darkly funny, the film is so sharply conceived and richly populated that it often registers like a Frederick Wiseman documentary, even though everything is scripted and every part played by a professional. This is only the second feature of Cristi Puiu, who claims to have been inspired by his own hypochondria, but he’s already clearly a master. In Romanian with subtitles. R. (JR)… Read more » 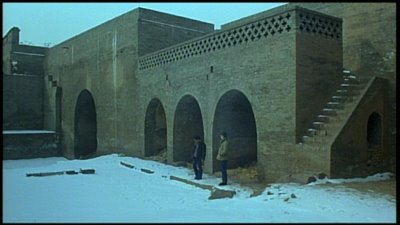 Jia Zhang-ke’s second feature (2002) is his best work to date and one of the greatest of all Chinese films. Its subject is the great theme of Chinese cinema, the discovery of history, which links such otherwise disparate masterpieces as The Blue Kite, Blush, Actress, The Puppet Master, and A Brighter Summer Day. The story charts the course of the Cultural Revolution’s aftermath for about a decade, noting shifts in values and lifestyles, culture and economy, as China moves inexorably from Maoism to capitalism, as witnessed by five actors in a provincial traveling theater troupe. Many episodes unfold in single long takes, with offscreen sound playing an important role, and the beautifully choreographed mise en scene recalls the fluid Hungarian pageants of Miklos Jancso in the 60s and 70s. Originally 192 minutes long, the film was recut by Jia to its current 155 minutes and improved in the process. In Mandarin with subtitles. (JR)

The visual effects in this Mexican extravaganzawith orgies staged like music videos and lavish conceits involving devils, mirrors, vampires, and filmmakingare so attention grabbing it takes a while to see how shallow their narrative pretexts are. It’s hard to know whether writer-director Alejandro Valle and codirector Felipe Gomez love decadence because of how it looks or because they want to squeeze some esoteric content out of their images, but the atmosphere is psychedelic 60s minus the cruelty of El topo and the sheer nerve of Performance. Basically it’s all nonsense, but I thoroughly enjoyed it until it wore me down. In Spanish with subtitles. 120 min. (JR)… Read more »

The first Tsai Ming-liang film I’ve disliked recycles its predecessors’ main actors (Lee Kang-sheng, Chen Shiang-chyi), physical elements (water, Taipei), themes (loneliness, alienation), and stylistic tropes (symmetrical compositions, absence of dialogue). It does offer more lavish musical numbers than The Hole, including choreographed Chinese versions of Sixteen Tons and The Wayward Wind, and two key additions are watermelons and hard-core sex, sometimes used in conjunction. Tsai’s obvious disgust at the sex is part of what makes the film so unpleasant; he remains a brilliant original, but this is a parody of his gifts. In Mandarin with subtitles. 112 min. (JR)… Read more »

A Pakistani engineer in Paris (cowriter Ayad Akhtar) is kidnapped by the CIA, turned over to Pakistani interrogators, and tortured at length. This intelligent, well-made drama deliberately keeps us in the dark about the engineer’s involvement in fundamentalist terror before the torture but leaves no doubt that the experience further radicalizes him. Arriving in New Jersey with a cover story about having driven a cab in Canada, he lodges with an old friend and his family, all the while preparing a suicide bombing for Grand Central Station. A few plot details strain credibility, but the characters (particularly the friend’s sister and little boy) are persuasively depicted. Joseph Castelo (American Saint) directed and cowrote the script. 90 min. (JR)… Read more »

Three key American experimental films that all resemble guessing games. Hollis Frampton’s (Nostalgia) (1971), one of his greatest works, is a profound and profoundly tricky meditation on photography and memory. Remedial Reading Comprehension (1971) by George Landow, who has since renamed himself Owen Land, is one of his funnier structural puzzles. And Bleu Shut (1970), according to Fred Camper, engages the viewer in a peculiar brand of ‘participatory’ cinema: clock hands on the screen supposedly tell us when the film will end, while we hear two voices on the sound track trying to guess the names of the small pleasure boats whose pictures we see, in a parody of multiple-choice quiz shows. (JR)… Read more »

American expatriate Jon Jost returned to the Pacific northwestthe locale of his shattering Sure Fire (1990) and The Bed You Sleep In (1993)for this 2004 drama about a confused and jobless 26-year-old whose kid brother comes back from Iraq in a body bag. Like the earlier movies, it casts nonprofessional actors as the dysfunctional family members, but apart from the bold and original use of split screen at the beginning, it’s mawkish and unconvincing. I share much of Jost’s anger and despair over the war’s impact on our national health, but he forces his hand by making all the characters unsympathetic fuckups. 104 min. (JR)… Read more »

Celebrated in Iran for his theater work as much as his early role in the Iranian new wave, Bahram Bayzai has cited Alfred Hitchcock as an important influence on his film work, but there’s little evidence of it in this 2001 thriller. The heroine (well played by Mozhdeh Shamsai) returns to Tehran from a trip to confront her husband for his infidelities and discovers that he’s been involved in various criminal activities, and Bayzai allows her to dispense violence with a freedom usually reserved for men in Hollywood action thrillers. This was a commercial success in Iran, not an art-house release, which makes it of interest despite a discouraging reliance on cliches. In Farsi with subtitles. 135 min. (JR)… Read more »

This noirish 1946 feature was efficiently directed by Jean Negulesco, but the real auteur is John Huston, whose script (with Howard Koch) was one of many partial spin-offs from his career-making The Maltese Falcon. (The dark icon this time represents a Chinese goddess.) Peter Lorre, Sydney Greenstreet, and Geraldine Fitzgerald are the title trio, who wind up sharing a sweepstakes ticket in prewar London, their destinies governed by Huston’s misanthropic gallows humor and cruel sense of irony. 92 min. (JR)… Read more »

Short 16-millimeter films by the great experimental dancer-performer-filmmaker-theorist Maya Deren, perhaps the first major figure in the American avant-garde cinema: Meshes of the Afternoon (1943), codirected by Alexander Hammid; At Land (1944), possibly her greatest film; A Study in Choreography for Camera (1945); Ritual in Transfigured Time (1946); her unjustly neglected Meditation of Violence (1948); and The Very Eye of Night (1959). 86 min. (JR)… Read more »

The most independent and resourcefully frugal of American underground filmmakers, Jon Jost thrives in isolation, but his work often suffers from his lack of connection, particularly his disinclination to remain in any one place for long. This experimental documentary (2003, 116 min.) about Jost’s first encounter with Paris is a notable exception; with a minimal narrative, it pays sensitive tribute to such Parisian art as Eugene Atget’s photography, impressionist-era paintings, music by Satie and Debussy, and the youthful romance of Godard’s early films, played out here by Helene Fillieres and James Thierree. Shot in ‘Scope and partially composed in diptychs, it does a much better job than Jost’s London Brief (1997) of celebrating his shift from film to video, and the shooting and editing both sing with lyrical invention. In French with subtitles. Jost will attend the screening. Thu 10/13, 8 PM, Gene Siskel Film Center.… Read more »

Film Capital of the Week

Heaven knows what possessed the Chicago International Film Festival to adopt “Film capital of the world” as its slogan this year, but considering some of the movies that played in New York and Los Angeles recently and never made it here, it’s more than a stretch. Among the remarkable films they could see and we couldn’t were the subtitled, not the dubbed, version of Hayao Miyazaki’s Howl’s Moving Castle (2004), Abbas Kiarostami’s Five (2003), Hou Hsiao-hsien’s Cafe Lumiere (2003), and several 2005 films, including Tickets (with 40-minute episodes by Kiarostami, Ken Loach, and Ermanno Olmi), Hou’s Three Times, Alexander Sokurov’s The Sun, and Jean-Pierre and Luc Dardenne’s L’enfant. Of course even if you lived in New York or LA you might not have heard about them, because the industry, which assumes no one’s interested in such films, kept their profiles so low.

Plenty of what the industry thinks we should be interested in was on display a month ago at the 30th Toronto International Film Festival. More than ever before the industry reps casually took over the city as they previewed their latest “indie” and “art”–as opposed to mainstream–product.

American journalists these days are showing more compassion for ordinary people in dire straits, but the main headline on the Toronto-based National Post on September 15–”Ottawa’s Afghan Warning: Bill Graham expected to tell nation troops will die”–was overshadowed by a huge glamour shot captioned “Cameron Diaz Snaps at Photographers.” On the front page of the same edition’s film-festival section was the story “Modine a casualty of the red carpet: Actor pays price for wearing open-toed shoes.”

The tale about Matthew Modine’s foot being stepped on by someone in high heels ended with “Read into this what you may: Modine has been in town for the screening of his new one, the not-so-serious and acquired-taste film Mary.… Read more »