The team responsible for Ghost World–director Terry Zwigoff, screenwriter/comic book artist Daniel Clowes, and John Malkovich’s production company–reunites for this bitter satirical comedy. An ambitious and virginal young artist (Max Minghella) arrives at art school in search of sex and fame, but the careerism he encounters causes him to despair and betray his talent, especially when the model he loves (Sophia Myles) goes after one of his classmates. It’s a fascinating and provocative muddle: social satire, self-hatred, misanthropy, and misogyny become hard to disentangle as a subplot involving a serial killer comes to the fore. With Malkovich, Matt Keeslar, Jim Broadbent, Steve Buscemi, and Anjelica Huston. R, 102 min.… Read more »

Pulled From The Rubble

In this loving and heartbreaking 2004 video Margaret Loescher recounts her father’s traumatic experience in Iraq. A specialist in war refugees and correspondent for the Web page OpenDemocracy, Gil Loescher was meeting with the UN commissioner for human rights when a truck filled with explosives hit the building, killing 22 people and costing Loescher much of his right hand and both his legs. In her terse but eloquent voice-over Margaret denounces the war and its justifications, but she also interrogates her own motives in recording her family’s struggles and respects the fact that othersincluding the paramedic who saved her father’s life and whom she interviewsfeel differently. 63 min. (JR)… Read more »

Mardi Gras: Made In China

This 2005 video offers a bracing lesson in global economics, crosscutting between a bead factory in Fuzhou, China (a kind of internment camp where teenage girls work 12-hour shifts for ten cents an hour), and the New Orleans Mardi Gras festivities where the beads end up (including a ritual in which women flash their breasts in exchange for them). Video maker David Redmon repeatedly asks each group about the other and discovers that both are usually clueless. No surprise there, nor in the factory boss’s spin on how happy everyone is, the recycling of the beads in care packages sent to Baghdad, or the fact that the styrene used to manufacture them causes cancer. In English, Cantonese, Fujianese, and Mandarin with subtitles. 72 min. (JR)… Read more »

Sincere, square, and interminable, this World War II adventure (1949) stars Gregory Peck as a hard-as-nails brigadier general who takes command of a U.S. bombing squad in England, works his men to the limit, dispatches them to bomb the hell out of Germany, and flips out from the strain. Peck and director Henry King teamed up again the next year for The Gunfighter, a masterpiece that undermined the same sort of macho cliches presented here at face value. With Hugh Marlowe, Gary Merrill, Millard Mitchell, Paul Stewart, and Dean Jagger, who copped an Oscar. 132 min. (JR)… Read more »

Films From The Library Of Congress

A two-hour program of shorts selected and hosted by Gregory Lukow, chief of the Library of Congress’s Motion Picture, Broadcasting, and Recorded Sound Division. On the basis of two classics in the program that I’ve seenGjon Mili’s great jazz documentary Jammin’ the Blues (1944, 10 min.), with a priceless appearance by Lester Young, and Chuck Jones’s 1957 Bugs Bunny cartoon What’s Opera, Doc?this should be well worth checking out. Also screening are The House I Live In (1945), a piece of liberal propaganda on behalf of racial and ethnic tolerance starring Frank Sinatra, and The Happy Hottentots (1930), a one-reel comedy. (JR)… Read more » 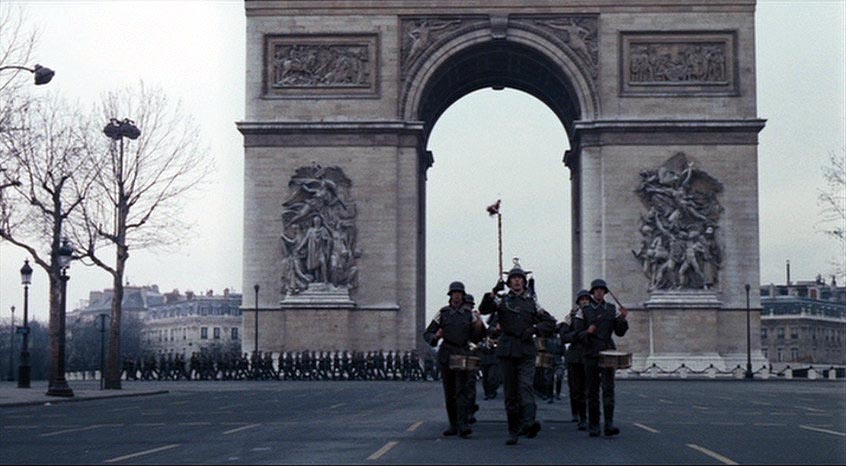 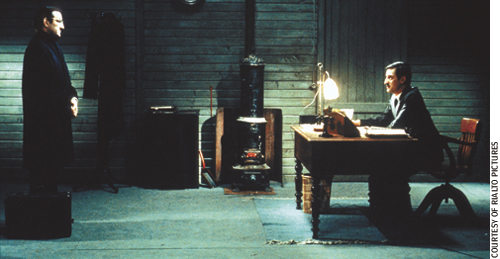 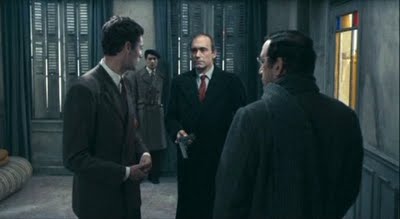 Bresson spent nine months in a German internment camp in 1940-’41, before the occupation of France, and his imprisonment is alluded to in one of his greatest films, A Man Escaped (1956). Melville, born Jean-Pierre Grumbach, joined the resistance in the early 40s — changing his Jewish surname to Cartier and then Melville in homage to Herman Melville — and three of his 13 features, all made after the war, deal with the German occupation.… Read more »

Jean-Pierre Melville’s 1969 thriller about the French Resistance, finally receiving its first U.S. release, is a great film but also one of the most upsetting films I know. Melville based his story on a novel by Joseph Kessel (Belle de Jour) that was published during the occupation and is reportedly far more optimistic; in the movie a resistance leader (Lino Ventura) gradually discovers that he and his comrades must betray their own humanity for the sake of their struggle, though in the end their efforts are mainly futile. As Dave Kehr wrote, “Melville is best known for his philosophical pastiches of American gangster films (Le Samourai, Le Doulos), and some of their distinctive rhythms — aching stillness relieved by sharp flurries of action — survive here.” With Simone Signoret (in one of her best performances), Paul Meurisse, Jean-Pierre Cassel, and Serge Reggiani. In French with subtitles. 145 min.… Read more »

Kings And Extras And The Fourth Room

Two delicate videos about wartime loss, both directed by Palestinian women. In Kings and Extras (2004, 63 min.) video maker Azza al-Hassan investigates the mysterious disappearance of the PLO film archive, three rooms’ worth of precious materials that vanished when Israel invaded Beirut in 1982. It’s an important subject, but her journey through four countries yields so little that she’s reduced to poeticizing her failure and interviewing random pedestrians. The loss in Nahed Awwad’s The Fourth Room (2005, 25 min.) is more personal: an amiable shopkeeper, traumatized by a past military invasion, guards a locked room from everyone, including Awwad, to prevent its being torn apart again. Both films are in Arabic with subtitles. (JR)… Read more »

The Power of Nightmares

Produced for the BBC in 2004, Adam Curtis’s three-hour polemical essay about the conceptually nonsensical but mythically potent “war on terror” is the most informative and stimulating film treatment of the subject to date. Curtis begins with the collapse of liberal idealism, charts the parallel development of radical Islamism (starting with Egyptian author Sayyid Qutp) and American neoconservatism (starting with Leo Strauss), and argues that Osama bin Laden encourages the lies and hype of Bush and Blair. The symmetries are too neat to be entirely persuasive, and as Curtis approaches the present, his arguments are more open to dispute (like his assertion that Al Qaeda doesn’t really exist). Yet the film is witty, intelligent, and brilliant in its use of archival elements, ranging from Egyptian TV commercials to images from The Thief of Bagdad and music from Citizen Kane. This is the first area screening, though the documentary can be downloaded at www.archive.org. DVD projection. Sat 5/20, 2 PM, Evanston Public Library, 1703 Orrington, Evanston, 847-866-0300.… Read more »

Andy Garcia’s first feature as director, an abortive anti-Marxist epic about the Cuban revolution, follows the fortunes of a wealthy Havana family, with Garcia as one of the sons, a nightclub owner. The script is credited to the late, great Cuban expatriate novelist G. Cabrera Infante, but the only traces of his wit are in a closing title and the treatment of Che Guevara (Jsu Garcia) and gangster Meyer Lansky (Dustin Hoffman); Infante also appears as a character of sorts, though casting Bill Murray as such a multicultural figure goes beyond grotesquerie to incoherence. Garcia seems to be aping the Godfather movies and Warren Beatty’s Reds, but the movie’s gracefulness is limited to its handling of the music (some of which Garcia wrote). With Ines Sastre, Tomas Milian, and Lorena Feijoo. R, 143 min. (JR)… Read more »

Attending a party, a young Manhattan executive with nothing but good luck (Lindsay Lohan) meets a young janitor with nothing but bad (Chris Pine), and when they kiss, they involuntarily exchange fortunes. Whimsical fantasy tends to work best when its premise is used sparingly, but in this case the fantasy element takes over the story, becoming mechanical and often confused (for instance, simple clumsiness is often conflated with bad luck). No less than five people are credited with the pile-driver script, but the two leads hold up the picture and the New York locations are nicely used. Daniel Petrie directed. PG-13, 108 min. (JR)… Read more »

Keeping Up With The Steins

I wasn’t looking forward to the prospect of a bar mitzvah comedy in which glitzy Brentwood parents (Jeremy Piven and Jami Gertz) try to outdo their neighbors, with voice-over narration provided by the dubious son. But the real focus of Mark Zakarin’s script is the dad’s resentment of his own father (Garry Marshall), a new age hippie who abandoned the family years earlier and now shows up with a girlfriend many decades his junior (Daryl Hannah). Maybe because director Scott Marshall is Garry’s son, he allows his affable father to steal the movie from everyone else, and his performance proves to be a small gift worth having. PG-13, 99 min. (JR)… Read more »

Down In The Valley

A rebellious working-class teenager in southern California (Evan Rachel Wood) gets involved with an emotionally disturbed if charismatic young man who fancies himself a cowboy (Edward Norton). Both actors work hard to give this disturbing crime story some flavor and substance, but the narrative is overextended and poorly organized. Writer-director David Jacobson (Dahmer) has reportedly recut the movie since its Cannes premiere; it still feels too long. With David Morse and Bruce Dern. R, 114 min. (JR)… Read more »

Chuck Kleinhans, professor of film at Northwestern University, will screen and discuss two essential structural films, both in 16-millimeter, that challenge the viewer’s sense of equilibrium: Michael Snow’s 52-minute Back and Forth (1969) and Ernie Gehr’s 41-minute Side/Walk/Shuttle (1991). (JR)… Read more »