Like Kevin Smith’s Clerks, this freewheeling comedy about goof-off college students in Georgia depends almost entirely on the actors’ charm rather than the plot or direction. The cast is likable and spirited, though writer-director-star Hadjii tends to falter whenever he aims for satire (among his broad targets are clueless whites, born-again church groups, and literacy programs). As long as one isn’t looking for insight, this is good, light fun. 88 min. (JR)… Read more »

A 15-year-old girl (Emily Rios) in the Echo Park district of Los Angeles gets pregnant and, despite her conviction that she’s technically a virgin, is kicked out of the house by her religious father. Taken in by her kindly great-great uncle (Chalo Gonzalez), a street peddler, she becomes part of another family with him and her cousin (Jesse Garcia), who was thrown out by his parents for being gay. Despite some awkwardness, this feature by writer-directors Richard Glatzer and Wash Westmoreland is a fascinating look at the area’s Mexican-American milieu and other local subcultures, full of feeling, insight, and touching performances. In English and subtitled Spanish. R, 90 min. (JR)… Read more »

The Oh In Ohio

Oliver Stone’s effective if hokey 9/11 docudrama focuses on the two Port Authority policemen (played by Nicolas Cage and Michael Peña) who were rescued from the rubble of the Twin Towers, their families as they wait for news, and a former marine (Michael Shannon) who winds up on one of the rescue teams. An exercise in flag-waving, it evokes nostalgia for World War II epics and the camaraderie of Stone’s Platoon, stroking Americans’ egos about their innate generosity but overlooking, except for a brief end title, all the citizens of 86 other countries who died in the attacks. Able newcomer Andrea Berloff wrote the script. With Maria Bello and Maggie Gyllenhaal. PG-13, 125 min.… Read more »

Chicago filmmaker Usama Alshaibi grew up in Iraq and the U.S., and although he recently became an American citizen, his personal video documentary has plenty to say about the day-to-day existence of his Baghdad relatives, whom he visited in 2004. Distance tends to simplify our view of anything, and this video humanizes the situation on the ground mostly by complicating it: in a voice-over Alshaibi says he’s often asked what “the Iraqis” think, but by the end this question has become as meaningless as asking what “the Americans” think. Much of his previous work has been experimental, but this becomes formally adventurous only near the end, as he converses by phone with a cousin who tells him how much worse the situation has grown this year. 92 min. Alshaibi, executive producer Studs Terkel, and Christie Hefner of Playboy, whose foundation helped fund the film, will answer questions after the screening, which kicks off the Chicago Underground Film Festival. See next week’s issue for a complete festival schedule. Thu 8/17, 8 PM, Music Box.… Read more » 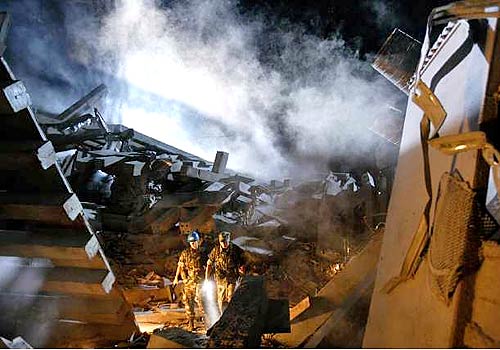 They probably aren’t the priorities of Oliver Stone, whose ruthlessly circumscribed World Trade Center isn’t about the 2,749 citizens of 87 countries who got killed in the 9/11 assault on the Twin Towers and who are mentioned only in a title when the movie’s over. It’s about two citizens of one of those countries who survived, John McLoughlin and William Jimeno, both real-life Port Authority policemen. The story of what they experienced is gripping and inspiring, but however true it is to their lives — it’s hard to imagine any two men on the planet could be as conventional as the filmmakers make these heroes — the way it’s told restricts what the movie can say about the larger tragedy.… Read more »

After peaking with My Favorite Season (1993), Wild Reeds (1994), and Thieves (1996), French director Andre Techine went into decline with Alice and Martin (1998), Far (2001), and Strayed (2003), often biting off more than he could chew. This 2004 feature also overreaches, especially in its metaphorical moments (a mud slide at a construction site that frames the action), but it’s his strongest film since Thieves, a characteristic effort to juxtapose various cultures, generations, and sexualities as people converge and diverge in Tangier. Volatile and sometimes daring performances by Catherine Deneuve, Gerard Depardieu, Gilbert Melki, Malik Zidi, and Lubna Azabal (as twins) contribute to the highly charged and novelistic experience. In French with subtitles. 90 min. Music Box.… Read more »