I’m not a fan of photographer Diane Arbus, but I suspect the basis of her talent was a capacity to turn all her camera subjects into freaks and not a simple interest in freaks per se. This arty and moody account of her formation as an artist, as its subtitle declares, is basically invented. Its nerviness only pays off in a few details and in Nicole Kidman’s resourcefulnessmainly a way of suggesting morbid curiosity as erotic stimulation, though the script manages to find diverse excuses for undressing her. Directed by Steven Shainberg, and written by Erin Cressida Wilson (who also wrote Shainberg’s previous feature, Secretary), this traces Arbus’s artistic roots as an oppressed 50s housewife and vicarious mother to an upstairs neighbor who looks like the beast in Cocteau’s Beauty and the Beast, sounds and acts like Robert Downey Jr., and introduces her to countless other freaks. With Ty Burrell, Harris Yulin, and Jane Alexander. R, 122 min. (JR)… Read more »

Based on a true story and written by Shawn Slovo (A World Apart), this Philip Noyce feature shows how a relatively apolitical young man in South Africa (Derek Luke) becomes a dedicated terrorist in the early 80s after he and his wife (Bonnie Henna) are wrongly arrested for a bombing and he’s tortured extensively. Todd McCarthy wrote in Variety, The question nags as to what pressing need there is, 25 years after the fact, for a thriller that hinges on apartheid in South Africa when there are so many new pressing and pertinent political and cultural issues. The answer is that torture may now be radicalizing Iraqi citizens. That said, the film never strays much beyond the obvious, despite a conscientious effort by Tim Robbins to humanize a white security officer. PG-13, 101 min. (JR)… Read more »

Based on a memoir by Augusten Burroughs, this first feature by writer-director Ryan Murphy clearly aims to outdo other comedy dramas about dysfunctional families through sheer hyperbole. The young hero (Joseph Cross) boasts an alcoholic father (Alec Baldwin) and an unglued mother (Annette Bening), who deposits him in the no less dysfunctional household of her therapist (a satirically funny Brian Cox). Maybe all this really happened, but I didn’t believe a second of it as portrayed. Bening (whose Oscar nomination for American Beauty seems to have turned her toward playing monsters) tries very hard, as do Joseph Fiennes, Evan Rachel Wood, Jill Clayburgh, and Gwyneth Paltrow. But Murphy seems either incapable of or uninterested in creating a recognizable world, so local comic effects count for everything. R, 121 min. (JR)… Read more »

God speaking through Neale Donald Walsch (Henry Czerny) seems to be a secondary and not especially memorable part of this story; the primary part is Putnam paying $1.5 million for world rights to Walsch’s first inspirational book, Conversations With God. Not a bad deal for someone who was once a jobless and homeless wretch with a broken neck, and writer Eric DelaBarre and director Stephen Simon deliver Walsch’s apotheosis without any trace of irony. But their treatment of his misfortunes has some of the ring of truth, even though the movie lingers far too long over its own epiphanies. With Ingrid Boulting. PG, 109 min. (JR)… Read more »

One of Clint Eastwood’s most accomplished westerns, based on a rather elaborate script by David Webb Peoples (who cowrote Blade Runner). Like Bird, this 1992 film seems at times to equate dark cinematography with artistry (albeit with stunning locations in Canada and California and beautifully composed results), and as with White Hunter, Black Heart its view of reality depends almost entirely on countercliches and their implied critique of the machismo of earlier Eastwood movies. Consequently, there’s not much dramatic urgency apart from the revisionist context. Eastwood plays a reformed alcoholic killer, now a widower, father, and failing hog farmer in Kansas, who’s lured into a bounty hunt by a brash kid (Jaimz Woolvett) and persuades an old partner (Morgan Freeman) to join them. With Frances Fisher, Anna Thomson, Gene Hackman, Richard Harris, and Saul Rubinek. R, 127 min. (JR)… Read more »

It’s possible that a good half of the greatest African movies ever made are the work of novelist-turned-filmmaker Ousmane Sembene (Black Girl, Xala, Ceddo). Camp Thiaroye (1987), cowritten and codirected by Thierno Faty Sow, recounts an incident that occurred in 1944. Returning from four years of European combat in the French army, Senegalese troops are sent to a transit camp, where they have to contend with substandard food and other indignities. An intellectual sergeant major (Ibrahima Sane) gets thrown out of a local bordello when he goes there for a drink; mistaken for an American soldier, he’s arrested and beaten by American MPs, which provokes his men into kidnapping an American GI. Then when the Senegalese troops discover that they’re about to be cheated out of half their back pay, they launch a revolt. Leisurely paced, this is a novelistic (and often witty) treatment of a complex subject in which all the characters get their due. In French and Wolof with subtitles. 147 min. (JR)… Read more »

Death Of A President

Gabriel Range’s English pseudodocumentary (2006), written with Simon Finch, shows the imagined aftereffects of the assassination of George W. Bush in Chicago in 2007. Some infotainment reports to the contrary, this film in no way celebrates such an event but shows it leading to further legislation curtailing civil liberties in the name of security once Cheney becomes president. And the larger theme, at least by intention, is the consequences of anti-Muslim bias. But the film proceeds more like a mystery thriller than an invitation to reflect, and that theme gets muddled. R, 93 min. (JR)… Read more »

Like many of Manoel de Oliveira’s features, this lush 2005 drama was adapted from a Portuguese novel by Agustina Bessa-Luis. A childless, depressive rich woman (Leonor Silveira) has her head turned by a professor (Michel Piccoli, speaking all his lines in English) and becomes obsessed with the idea of the Virgin Mary making a personal appearance in front of her. Meanwhile her servant (Ricardo Trepa) plots with a counterfeiter to fake an apparition. None of the melodramatic expectations set up in the story is met, but the very dry comedy makes this one of Oliveira’s more accessible works. In Portuguese with subtitles. 137 min. (JR)… Read more » 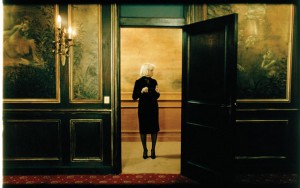 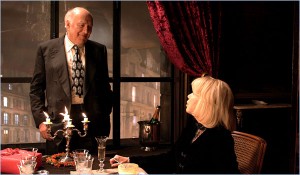 Unlike many colleagues, I’m not a fan of Amores Perros or 21 Grams, scripted by Guillermo Arriaga and directed by Alejandro Gonzalez I… Read more »

Most features composed of sketches by different filmmakers are wildly uneven. This one is consistently mediocre, albeit pleasant and watchable. It helps that none of the episodes runs longer than five or six minutes. Many of the most famous areas of Paristhe Latin Quarter, the Champs-Elyseesare omitted, but Olivier Assayas, Gurinder Chadha, Sylvain Chomet, Joel and Ethan Coen, Wes Craven, Alfonso Cuaron, Gerard Depardieu, Christopher Doyle, Vincenzo Natali, Alexander Payne, Bruno Podalydes, Walter Salles and Daniela Thomas, Nobuhiro Suwa, Tom Tykwer, and Gus Van Sant, among others, do pretty well with their chosen parts of the city. In English and subtitled French. 116 min. (JR)… Read more »

A working-class kid in the mid-80s (James McAvoy) is admitted to Bristol University, where he appears on a college quiz show and tries to romance a well-to-do teammate. The main novelty of this conventional, slight, but charming youth picture is that it’s English and therefore more class-conscious than most American equivalents, so I’m not sure why so many allusions to The Graduate are slotted in. David Nicholls adapted his own novel, Tom Vaughan directed, and Tom Hanks was one of the producers. With Rebecca Hall and Alice Eve. PG-13, 96 min. (JR)… Read more »

Rachid Bouchareb’s stirring war movie does for the North Africans what Ousmane Sembene and Thierno Faty Sow’s Camp Thiaroye (1987) did for the Senegalese: it acknowledges the important role they played fighting alongside the French in World War II and reveals the harsh and dismissive treatment of them that followed, a result of persistent colonialist attitudes. This was Algeria’s official Oscar entry this year and also won the Cannes film festival’s prize for best actor, which was shared by all five leads; they play a pied-noir sergeant and four North African enlistees traveling across Italy and France and into Alsace. In French and Arabic with subtitles. R, 120 min. (JR)… Read more »

Claudia Llosa’s first feature, a Peruvian film that won a prize at the Rotterdam festival, is an odd, disturbing, fictional yet seemingly ethnographic tale about a stranger who wanders into a remote Peruvian mountain village where the locals celebrate the three-day Easter weekend by suspending all prohibitions. Much of the focus is on a fearless, determined 14-year-old girl, strikingly played by Magaly Solier. In Spanish with subtitles. 103 min. (JR)… Read more »

Flags Of Our Fathers

Perhaps only the clout of director Clint Eastwood and coproducer Steven Spielberg could have brought us a movie about how the most inspirational photo of World War IIfour GIs raising the flag at Iwo Jimawas mendaciously exploited to sell war bonds. It’s a noble undertaking, and Eastwood is stylistically bold enough to create a view of combat based mainly on images that are clearly manufactured. (As with Saving Private Ryan, the movie’s principal source is The Big Red One, whose director, Samuel Fuller, actually experienced the war.) But this is underimagined and so thesis ridden that it’s nearly over before it starts. (Part of the storythe experience of Native American marine Ira Hamilton Hayeswas better told 45 years earlier in The Outsider, starring Tony Curtis.) William Broyles Jr. and Paul Haggis adapted a book by James Bradley and Ron Powers; with Ryan Phillippe, Jesse Bradford, and Adam Beach. R, 132 min. (JR)… Read more »