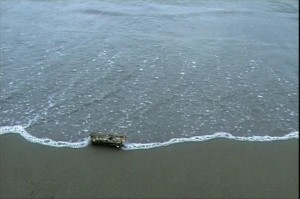 Fans of Abbas Kiarostami who have been wondering when they’ll be able to see Five (2003) — his 74-minute, five- part experimental film without dialogue, all shot on the seashore while he was scripting Jafar Panahi’s Crimson Gold — should know that it’s recently come out in France on a well-produced DVD released by MK2 and  readily available from French Amazon for just under 28 Euros. [2014 note: It’s now available on U.K. Amazon.] (Like other overseas DVDs, it’s playable on any multiregional DVD player, which includes a surprising number of stateside computers.) Apparently part of the reason for the long delay was Kiarostami’s slowness in producing a “making of” documentary, though what he’s finally come up with — his hour-long About Five, completed in  late 2005, available with English subtitles on the same DVD — is quite fascinating. Responding to pertinent questions put to him by English critic and programmer Geoff Andrew, he views his own work with a lot of refreshing as well as helpful candor. 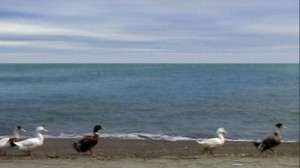 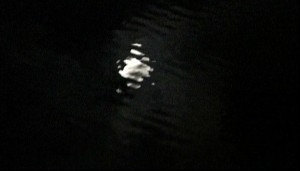 Much as the French DVD of The Wind Will Carry Us, also released by MK2 (and somewhat cheaper, even though it’s a two-disc set), includes a couple of mind-boggling Japanese documentaries (also with English subtitles) that have done much to enhance my appreciation of one of Kiarostami’s greatest films, his own account of his more modest Five is no less full of surprising revelations about the elaborate artifice that lurks behind most of his seeming causalness and off-handed methods as a filmmaker.

A Mexican-Spanish coproduction by the talented Guillermo del Toro (Cronos), this nightmarish fairy tale for grown-ups takes place in Spain after the civil war, when the Republicans were still counting on help from the Allies that would never come. A little girl in the rural north (Ivana Baquero) whose widowed mother has married a sadistic captain of the Guardia Civil (Sergi Lopez) conjures up a faun (Doug Jones), who identifies her as a princess and gives her three tasks to accomplish before she can be returned to her underground kingdom. Unlike most horror movies, this chiller gives equal prominence to reality and fantasy, though the reality is far more frightening. The only precedent that comes to mind in terms of a lyrical treatment of a child’s experience of terror is The Night of the Hunter. In Spanish with subtitles. R, 120 min. (JR)… Read more »

A mousy druggist (Richard Basehart) married to a two-timing tramp (Audrey Totter) contrives to kill his wife’s lover (Lloyd Gough) in this absorbing 1950 noir directed by the underrated and soon-to-be-blacklisted John Berry (He Ran All the Way). Cyd Charisse is his wholesome neighbor and Barry Sullivan a sleazy cop, who narrates. The married couple predate and likely influenced Elisha Cook and Marie Windsor’s characters in The Killing. 95 min. (JR)… Read more » 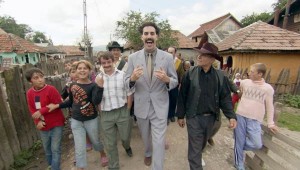 Curse Of The Golden Flower

Ever since Zhang Yimou went digital with Hero (2002), his color coding and sense of spectacle have been devalued by a certain dehumanizing process; this historical adventure proves he still has an eye for striking images, but his formalism brings steadily diminishing returns, especially when it involves crowds of insectlike warriors. Adapted from a 1930s play, this stars Gong Li (at her most tremulous and sweaty) and Chow Yun-fat (miscast) as an empress and emperor of the Tung dynasty, but not even they can make much of its tragic story seething with decadent palace intrigues. The movie has plenty to engage one’s interest but little to sustain it. In Mandarin with subtitles. R, 114 min. (JR)… Read more »

Political incorrectness toward Christmas, Christian charity, and gender-bending informs this lively 1982 farce about workers at a suicide hotline colliding with various desperate eccentrics on Christmas Eve. Director Jean-Marie Poire wrote the script in collaboration with most of the major actorsJosiane Balasko, Marie-Anne Chazel, Christian Clavier, Gerard Jugnot, Thierry Lhermitte, and Bruno Moynotand their desire to be irreverent (the title translates as Santa Claus Is a Bastard) gets a mite monotonous. In French with subtitles. 88 min. (JR)… Read more »

This absorbing documentary by Colin Keith Gray and Megan Raney Aarons is a classic sports story about the great Hungarian water polo team that stomped the Soviets at the 1956 Olympics, avenging the recent counterrevolutionary crackdown in Hungary. But it’s also an exemplary and multifaceted history of Hungary since the Nazi occupation. The interviews with former Hungarian and Soviet players are pungent, and Nikita Khrushchev’s son Sergei contributes some interesting comments about his father’s ambivalence toward Hungary during this period. In English and subtitled Hungarian and Russian. 90 min. (JR)… Read more »

A strong performance by Jerzy Stuhr is the main reason to see this 1976 Krzysztof Kieslowski feature, also known as Peace and Quiet. Stuhr plays an ex-con who starts over in a new city with a construction job, finds another fiancee, and eventually must choose between his striking coworkers and the boss who’s blackmailing him. Banned in Poland until 1980, the year Solidarity was founded, this is relatively insular compared with Kieslowski’s later, better-known features, but Stuhr manages to carry it. In Polish with subtitles. 82 min. (JR)… Read more »

You Better Watch Out

Lewis Jackson directed this offbeat 1980 thriller about a murderer (Brandon Maggart) who dresses as Santa. Watch the DVD instead and you can hear Jackson discussing it at length with John Waters, one of its biggest fans. 100 min. (JR)… Read more »

There’s no question that Krzysztof Kieslowski’s cowriter Krzysztof Piesiewicz had a decisive impact on The Decalogue and Three Colors, and this 1984 feature, their first collaboration, often seems like a trial run for Blue. A young lawyer (Jerzy Radziwilowicz, known for his work with Wajda, Godard, and Rivette) dies in 1982, when Poland is under martial law, and his death affects not only his widow (Grazyna Szapolowska) but the case against a young strike leader whose defense has been taken up by the lawyer’s mentor (Aleksander Bardini). Despite an awkward and unnecessary narrative frame involving the lawyer’s ghost, this is terse, suggestive, and pungent, with juicy performances by Bardini and Szapolowska. In Polish with subtitles. 107 min. (JR)… Read more »

Night At The Museum

Drawn from a children’s book by Croatian illustrator Milan Trenc, this fantasy isn’t exactly heavy, but its ideological implications are interesting nevertheless. A poorly educated, professionally challenged father (Ben Stiller) lands a job as a security guard at New York’s Museum of Natural History, where the historical mannequins come to life every night, most of them speaking perfect contemporary English and behaving like sitcom characters. They mostly fight among themselves until the guard brings all of global history into benign, all-American colonial harmony, even launching a romance between Teddy Roosevelt (Robin Williams) and the Native American guide Sacajawea (Mizuo Peck). As mindless spectacle, this is reasonably entertaining. Shawn Levy directed; with Carla Gugino, Dick Van Dyke, Mickey Rooney, Bill Cobbs, Ricky Gervais, and Steve Coogan. PG, 108 min. (JR)… Read more »

This well-intentioned but obvious drama by director-cowriter Matt Tauber concerns an architect (Anthony LaPaglia) with a dysfunctional family (Isabella Rossellini, Hayden Panettiere, Sebastian Stan) who locks horns with an inner-city activist (Viola Davis) over the slum high-rise he designed. It’s adapted from a play by cowriter David Greig, but Tauber’s maddening habit of crosscutting between bite-size plot points seems to come straight from TV. The mechanical dialogue spells everything out, watering down Ibsen to the consistency of a daytime soap. R, 82 min. (JR)… Read more »

The Pursuit Of Happyness

Failure is one of the most potent American subjects, largely because of the drama implicit in our denial of it. This inspirational movie tells the true story of an unsuccessful salesman in San Francisco (Will Smith) who assumes custody of his young son as a single parent and contrives to switch professions. Smith is resourceful in the role, though the story stretches one’s credulity about his character’s resourcefulness. Gabrielle Muccino directed; with Thandie Newton and Jaden Smith (the star’s son). PG-13, 117 min. (JR)… Read more »

Argentinean writer-director Fabian Bielinsky made only two features before dying of a heart attack at age 47, but they’re both masterful in their gripping storytelling. Nine Queens (2000), a hugely entertaining tale of scam artists in Buenos Aires, anticipated Argentina’s economic crisis and was vastly superior to Criminal, the 2004 remake produced by Steven Soderbergh. The Aura (2005) also involves a scam, but the story unfolds with a minimum of dialogue as an epileptic taxidermist (Ricardo Darin), stranded in the wilds of Patagonia during a hunting trip, intuitively works his way into an elaborate casino heist. The moody ambience suggests noir writers David Goodis and Jim Thompson, though the reported inspiration was Deliverance. In Spanish with subtitles. 134 min. a Music Box. … Read more »