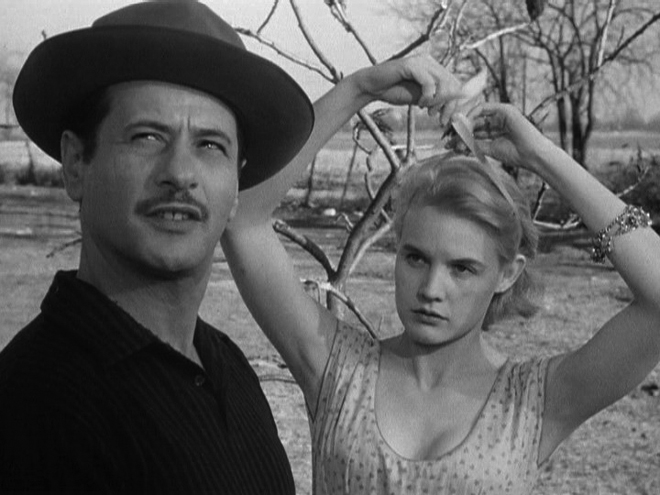 One of Elia Kazan’s most underrated movies is his only pure comedy, scripted by Tennessee Williams and shot on location in rural Mississippi. Carroll Baker stars (in her debut) as a virgin child bride hitched up to Karl Malden at his most unsavory; Eli Wallach (in another debut) is brilliant as Malden’s business rival who manipulates both of them. Though this film was roundly condemned for salaciousness by the Legion of Decency when it came out (1956), its plot actually pivots around the ambiguous matter of whether sex actually takes place or not, and it’s the seediness of the southern milieu — Baker’s dirty neck rather than her dirty mind or morals — that seemed to have the censors up in arms. But it’s largely Kazan’s authentic feeling for the locale, aided by Boris Kaufman’s superb black-and-white cinematography, that makes this movie so special, combined with first-rate ensemble work. With Mildred Dunnock. 114 min. (JR)

I’m a frequent contributor to Rouge, so I hope nobody thinks I’m tooting my own horn if I come right out and say that I regard it as the best film magazine going that’s exclusively online. It’s been around since 2002, and it happens to be based in Australia, but you might not even notice this if you were scanning the table of contents of any issue, because it’s far and away the most international of film magazines in English. The latest issue, number ten, has contributors from Australia, Brazil, France, Hungary, Japan, Portugal, Russia, and the U.S., including some filmmakers (Pedro Costa and Mark Rappaport) as well as critics writing about films from most of those countries plus England, India, and Bosnia. About half of the 16 contributors are writing in English, about a third are translated from French, Japanese, or Portuguese, and a couple more express themselves exclusively in the form of a photograph or film frames. In fact, one of the most fascinating of Rouge‘s former issues, number five (2004), devoted itself exclusively to images selected by 52 contributors.

It’s fairly highbrow, and relatively austere in spite of its ingenious uses of images, so I can’t pretend that Rouge is geared to every taste.