A comedy thriller without many laughs or thrills, this 2005 French feature by Costa-Gavras (Z, Missing), adapted from a Donald E. Westlake novel, follows the machinations of a middle-aged engineer downsized from the paper industry who proceeds to murder all of his likeliest competitors in the job market. Jos Garcia, known for roles more comic than this one, brings a certain intensity to the part, but the story’s satirical possibilities remain largely untapped. Given the overall slickness, I was surprised to see Jean-Pierre and Luc Dardenne (L’Enfant) credited among the coproducers; their signature actor Olivier Gourmet turns up in an effective cameo. In French with subtitles. 122 min. (JR)… Read more »

Alan Conway, a gay con artist in England who successfully impersonated Stanley Kubrick in the 90s, died in 1998, only a few months before Kubrick. His exploits are fascinating because the people he fooled, seduced, and/or exploited knew even less about the filmmaker than he did when he brandished Kubrick’s name and promised to hire or help them. This 2005 British feature by writer Anthony Frewin and director Brian Cook, both former Kubrick assistants, uses Conway’s unlikely saga to mount an appreciative send-up of a certain style of gay extravagance, with John Malkovich having a field day as Conway. 86 min. (JR)… Read more » 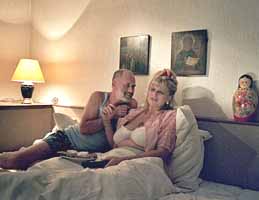 The blighted relationships explored by a Prague psychologist with marital troubles of her own (Jana Janekova, excellent) are the focus of Vera Chytilova’s 2006 Czech feature, her best in many years. With its aggressively mobile camera and abrupt editing, the movie seems to lurch from one miniplot to the next as if in a punch-drunk trance. Like much of Chytilova’s best work (Daisies, The Apple Game), it sometimes verges on hysteria, but it’s clearly enhanced by the experience of screenwriter Katrina Irmanovova, a therapist herself. And her fictional patients evoke the letter writers of Nathanael West’s novel Miss Lonelyhearts in their cumulative misery, suggesting some poetic yet plausible version of the modern world. In Czech with subtitles. 108 min. (JR)… Read more »

A dozen years after Seven, director David Fincher again treats a serial killer, only this time it’s a true story (adapted by James Vanderbilt from Robert Graysmith’s autobiographical best seller) and not at all metaphysical. In some ways, for better and for worse, this is even more about Graysmith (Jake Gyllenhaal)who became obsessed with solving the Zodiac killings that terrorized northern California in the late 60sthan about the murderer. I’m not convinced this had to be 158 minutes long, so it’s all the more annoying when essential material gets elided (as in a sequence featuring an uncredited Ione Skye). But Fincher does keep this bubbling along, ably assisted by a cast that includes Mark Ruffalo, Robert Downey Jr., Chloe Sevigny, Elias Koteas, and Philip Baker Hall. R. (JR)… Read more »

Tears Of The Black Tiger

Wisit Sasanatieng’s self-consciously campy Thai western (2000) opens in the U.S. seven years late and six minutes shorter, but it’s still an enjoyably energetic genre romp. Staged in both open spaces and painted expressionist sets, it’s a classic doomed romance between a wealthy young woman and a peasant boy who becomes an outlaw (the Black Tiger of the title). Its giddy stylistics include extravagant use of color and rapid montage, said to be a direct homage to legendary Thai independent Ratana Pestonji. In Thai with subtitles. 97 min. (JR)… Read more »

Written and directed by Craig Brewer (Hustle & Flow), this provocative parable suffers from far-fetched premises, bad montage sequences, and facile symbolism. But any movie that can make Samuel L. Jackson convincing as a great Memphis bluesman must be doing something right. Christina Ricci, barely recognizable, plays a drug-addled nymphomaniac Jackson finds passed out in the road, chains like a dog in his shack, and sets out to cure. Brewer knows how to guide his leads through this improbable story, and he kept me interested in spite of everything. John Singleton served as coproducer. R, 116 min. (JR)… Read more »

Alejandro Jodorowsky’s big-budget 1973 follow-up to El Topo, again starring himself, is a lot more imaginative and watchable, though no less highfalutin. More overtly religious and New Agey than Jodorowsky’s other pictures, it describes a spiritual quest and slings in outrageous shocks at every opportunity, yielding many eyefuls and some occasional food for thought. On the whole, enjoyable nonsense. R, 120 min. (JR)… Read more »