Two Takes on the Truth 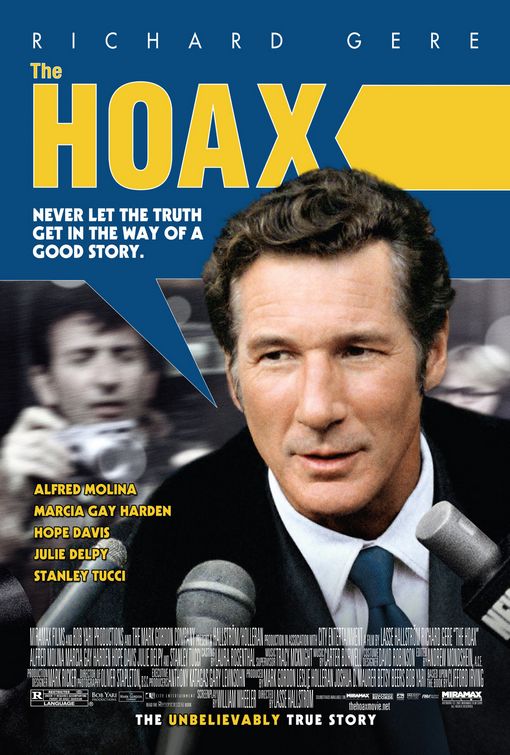 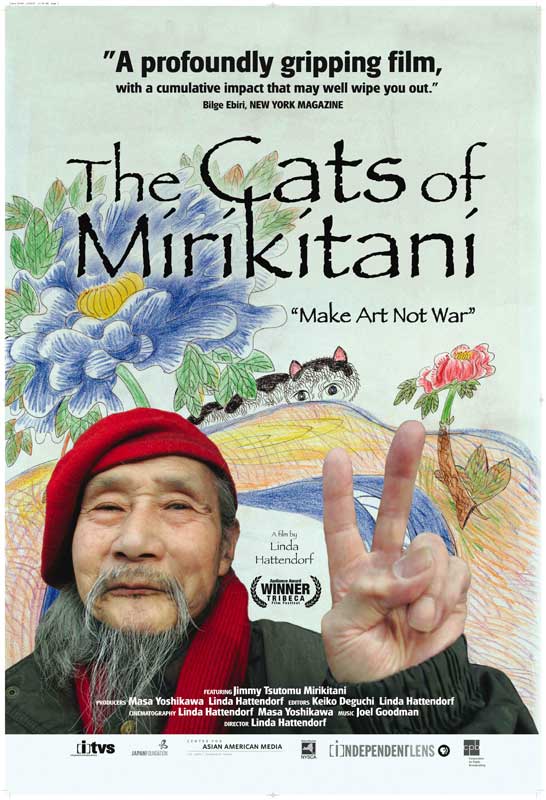 THE HOAX * DIRECTED BY LASSE HALLSTROM

THE CATS OF MIRIKITANI***  DIRECTED BY LINDA HATTENDORF

There are ways both official and unofficial to describe “the movies.” There’s the new releases the industry decides to push in the malls, and then there’s everything else, which we’re obliged to root out for ourselves. A schoolteacher I know in the wilds of Argentina selects and projects DVDs on a regular basis, and some of the stuff he shows — old experimental shorts, recent features by Abbas Kiarostami, Alexander Sokurov, and Gus Van Sant — is pretty specialized. But he must know his audience at least as well as any studio, because his screenings draw about 800 people a week.

I’d like to think that kind of niche viewing is the wave of the future, something that will put a lot of mall fare to shame. And applying this notion to a couple of features opening this week, I’d like to think that a quietly precious piece of artfully arranged storytelling like The Cats of Mirikitani and a brassy piece of bluster like The Hoax represent respectively the future and present of movies. The first is addressed to its audience like a personal letter; the second isn’t addressed to anyone at all. Watching it is like being sprayed with paint.

The Cats of Mirikitani is Linda Hattendorf’s digital video about Jimmy Mirikitani, a homeless 80-year-old Japanese artist she met, befriended, and eventually housed for a spell in her apartment in lower Manhattan. I first encountered it last month as a juror at the Big Muddy Film Festival in Carbondale, where it was one of 60 total submissions. It recounts such a fascinating, absorbing, and instructive tale, full of delayed revelations and subtle pleasures, that the jury unanimously gave it the top prize, citing it as both the best documentary and the best narrative film. After that it opened in a modest commercial run in New York, where most of the press ignored it, but I’m fairly confident it will be discovered and treasured by a good many people in years to come. It’s a quintessential niche-market item.

The Hoax, a quintessential mainstream doorstop deceptively marketed as an art movie, is based on a real-life scam perpetrated in the early 1970s by Clifford Irving with the help of his friend Richard Suskind. Irving claimed to have coauthored an autobiography by the reclusive billionaire Howard Hughes, a manuscript he and Suskind actually fabricated out of whole cloth without either having ever met Hughes. Irving sold the book to McGraw-Hill for a fortune — $765,000 — but once the scheme was uncovered, he was convicted of fraud and sent to federal prison for 14 months. 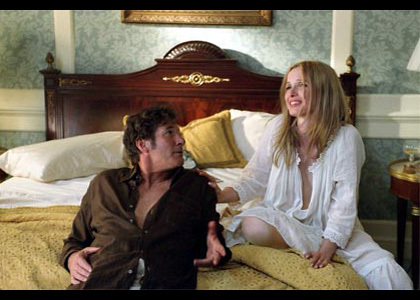 Essentially the same story is recounted, far more accurately as well as meaningfully, in Orson Welles’s F for Fake (1974), where it delivers a radical lesson about both the speciousness of punditry and media expertise and the complicity of the audience in most hoaxes. The cynical postmodernist lessons of The Hoax are quite different: that shallow media types (as opposed to clear, no-bullshit thinkers like the rest of us) are dying to be fooled, that all of us are hustlers, and that none of us really knows the truth anyway.

Irving’s own version of the events, originally published in 1972 as Clifford Irving: What Really Happened (His Untold Story of the Hughes Affair) and renamed The Hoax almost a decade later, is such a good story, a genuine page-turner, that it’s more than a little perverse that the filmmakers elected not to tell it. “The movie is basically fiction,” Irving wrote of the script on his Web site. “You could call it a hoax about a hoax.” For starters, Irving has been transformed from a bohemian expatriate novelist living in Ibiza — also the home of art forger Elmyr de Hory, the subject of Irving’s 1969 nonfiction book, Fake! – into a middle-class bore living in upstate New York, played by an actor (Richard Gere) with little of Irving’s charisma. The film’s opening, in which McGraw-Hill brass prepare for a helicopter landing by Hughes on the roof of their building in Manhattan, is a total fabrication, as are most of the scenes that follow: a hotel in the Bahamas being emptied of guests for the benefit of Hughes; Irving and Suskind (Alfred Molina) swiping a manuscript by Noah Dietrich; Suskind having an affair with a hooker; the mysterious arrival of Hughes-related files at Irving’s house. The movie’s most outrageous claim — that the hoax somehow led to the Watergate break-in — comes from Michael Drosnin’s 1987 book, Citizen Hughes, which Irving, ever the self-promoter, has excerpted on his Web site.

It could be argued, of course, that Irving’s account, written with Suskind, might not be the unvarnished truth either, though Irving insists in his author’s note that contradicting any sworn testimony about the hoax could have landed both men back in prison for perjury. (However, he did recently admit to Bookforum’s Paul Maliszewski that the author of the book’s epigraph, “Jean Le Malchanceux,” is a “fictitious crusader monk” used by various writers in Ibiza.) Still, if I prefer Irving’s inventions or semitruths to those of Miramax, it’s because his tell a more enjoyable and meaningful story. As Welles shows so effectively in F for Fake, the appeal in Irving and de Hory’s hoaxes is the way they ultimately render a kind of poetic justice, revealing the arrogance of the official versions of historical truth and artistic value as established by institutions and large corporations, whether these happen to be McGraw-Hill, major art museums, or the Hughes empire. Irving has never spelled out his motives so precisely, but as a novelist lusting after fame who already felt he was being marginalized by McGraw-Hill, he clearly had some fish to fry.

But Miramax is itself an institution, and trying to make us believe its philosophical interests coincide with ours is a hoax in its own right. Switching Irving’s home base from Ibiza to upstate New York is a budgetary decision with dubious artistic consequences, and other changes can be attributed to either bad screenwriting or contempt for the viewer’s intelligence (sometimes there’s no difference). Artistic license doesn’t seem to figure into it at all. Studios often suggest that what’s best for them financially and what’s best for the public are one and the same –c onsider those inapt and inept anti-piracy ads that get attached to some DVDs, the ones that equate duplicating a mass-market commodity with filching a neighbor’s car or handbag. But in this instance, if you fork over money to see what Miramax has done with Irving’s delightful story, the only person being robbed is you.

The Hoax is fundamentally a David and Goliath story, the little guy getting even with the big corporation. Apart from a faceless, offscreen government bureaucracy that we only learn about indirectly, there are no Goliaths in The Cats of Mirikitani, just a couple of small fries: the filmmaker and her subject. It takes Hattendorf most of 74 minutes to arrive at the heart of the matter, because Jimmy Mirikitani has one of those intricate backstories that resists the sort of easy paraphrase found in Hollywood biopics — a life that can only be understood gradually, in increments. Our perspective on Mirikitani continually changes, ample evidence that film editing at its best equals a kind of writing. 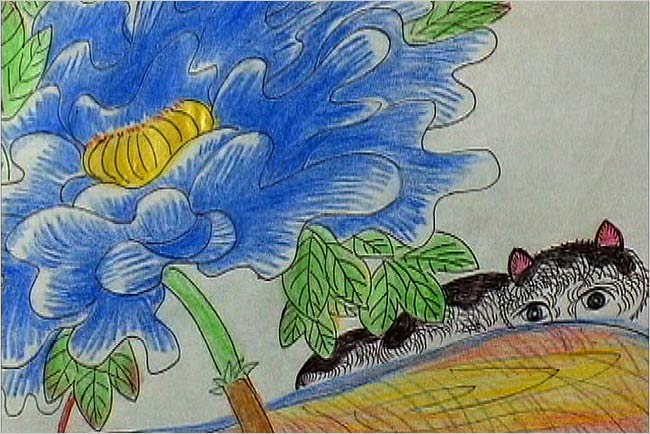 Born in Sacramento in 1920 and an artist from an early age, Mirikitani was raised in Hiroshima until a clash with his father and the rising tide of Japanese militarism drove him to return to California at the age of 18, where he went to live with a sister. But three years later, after the attack on Pearl Harbor, Mirikitani was incarcerated with other Japanese-Americans in a concentration camp, where he remained for the next three and a half years. He lost contact with his sister, who was sent to a different camp, and didn’t reconnect with her for six decades. Most of his family was killed when Hiroshima was decimated by the atomic bomb.

The Cats of Mirikitani begins in Soho in early 2001, when Hattendorf meets Mirikitani by chance, homeless and painting pictures on the street a block from her apartment. After 9/11, she takes him in and tries to help him find work and housing. Hattendorf has extensive experience editing documentaries, and her skill here is so developed that she doesn’t have to articulate any of the points she wants to make — graceful juxtaposition does the job for her. As in the best classic Hollywood narratives, the story doesn’t feel assembled, it feels like it’s merely happening. Even the modest ways Hattendorf introduces herself into the story are glancing and unobtrusive, always done with an eye toward enhancing her main character, such as the droll moment when Mirikitani expresses his distress after she comes home late one night from a long movie. 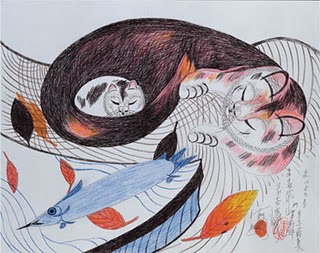 By this time, which is still quite early in the film, the narrative has been so purposeful that we already know this street artist well enough to see certain aspects of 9/11 through his eyes — not just parallels between the bomb dropped on Hiroshima (and the 160,000 civilians killed there) and the destruction of the World Trade Center, but also parallels between the racial profiling of Japanese-Americans after Pearl Harbor and racial profiling of Middle Eastern- Americans after 9/11. “Same old story,” we hear Mirikitani mutter, but that’s the furthest the film ever goes in underlining such comparisons. We wind up responding to the line more as the thought of the character than as an editorial point made by the director, even though it registers as both. 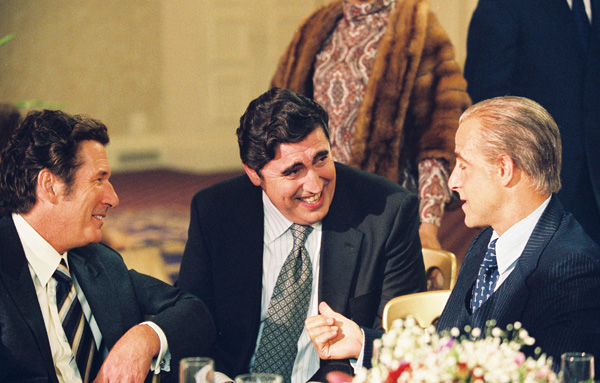 That’s the difference between good and mediocre storytelling. Alfred Molina may be a swell actor, but that counts for little when he’s obliged to play an uninteresting buffoon. In The Cats of Mirikitani, the story is its lead character, and Hattendorf’s deft editing keeps him growing throughout. This is an unofficial movie about an unofficial life, which is why we have to take some initiative in order to see it. Niche viewing requires some commitment on our part, but it’s usually well worth the trouble. 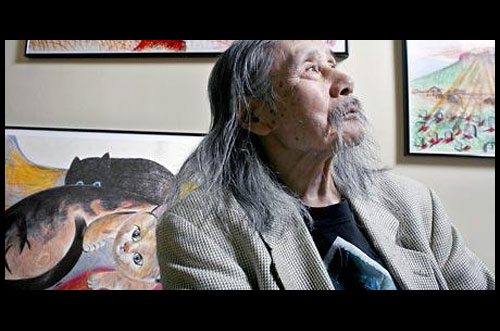