As someone who’s been developing an allergy to Robin Williams over the years, I didn’t exactly welcome the idea of his playing the clergyman from hell as he conducts a souped-up version of a rigorous marriage preparation course for a Chicago couple (Mandy Moore and John Krasinski). But even if I could have put up with the unpleasantness of this as comedy, I still would have balked at the eventual portrayal of this monster as an angel in disguiseeven as he’s monitoring the couple’s every move from a surveillance van to make sure they don’t indulge in premarital sex. Director Ken Kwapis (The Sisterhood of the Traveling Pants) gives this script by many hands a certain gloss it doesn’t deserve. PG-13, 100 min. (JR)… Read more »

Susan Minot adapts her own novel with the help of Michael Cunningham (The Hours) about a dying woman (Vanessa Redgrave) coming to terms with her two daughters (Natasha Richardson and Toni Collette) and memories of her youth in the 50s (where she’s played by Claire Danes). Despite the show-offy cast, it took me a while to warm to these people and their self-consciously idyllic settingsas well as to the slick direction of former cinematographer Lajos Koltaibut I was eventually won over. With Meryl Streep, Glenn Close, Patrick Wilson, and Hugh Dancy. PG-13, 118 min. (JR)… Read more »

Even after one factors in the 1985 stroke that left Michelangelo Antonioni mainly paralyzed, the ambiguous degree to which his wife Erica has been responsible for most of his subsequent work (some of which she cosigns), and the overall decline in the quality of most of his films since the 70s, the shorts in this program, all commissioned and showing in excellent prints or on video, are truly all over the map. They range from his beautiful documentaries of the late 1940s (about people working in the Po River valley, Roman street cleaners, the production of popular photographed comic strips called fumetti, superstitions, and the manufacture of rayon clothes) to his more uneven travel sketches of the 1990s (about Rome, Sicily, and the island of Stromboli). In between are so-so works about rock carvings in the Villa Orsini and a cable car (1950) and bathing in the Ganges (1989), plus a truly awful music video from 1984. 110 min. (JR)… Read more »

Indy director T. Arthur Cottam stiffly plays an obnoxiously quirky indie director of the same name who’s shooting a supposedly serious movie in a trailer park. It seems like large chunks of this dull 2006 mockumentary are supposed to be funny, but I’m not sure whyunless one automatically assumes political incorrectness (in this case the sexual exploitation of a mentally disabled character in the film within the film) automatically equals comedy. I also found the storytelling hard to follow, though maybe that’s just because I was never engaged. But Filthy Food (2006), the five-minute Cottam short playing with this featurean audacious bit of comic porn featuring pieces of fruitis a blast. 89 min. (JR)… Read more »

Asked who the greatest French poet was, Andre Gide said, “Victor Hugo, alas.” I feel the same way about Michael Moore. He qualifies, sometimes lamentably, as our most important political filmmaker, in part just because the media do such a poor job of delivering basic news to us. His blistering attack on the American health care system and the abuses of medical insurance companies offers eye-opening contrasts with national health services in Canada, England, and France, and, atypically, he delays appearing on-screen for some 40 minutes to keep the focus on this country’s victims. When his comic persona finally does come in, there’s something a bit irritating about him asking so many questions he already knows the answers to, sometimes paying more heed to the audience members he perceives as clueless than to the people he’s talking to (like when he asks some Cubans on the street, “Is there a doctor here in Cuba?”). But this is still essential viewing–informative, corrosive, and even sometimes hilarious. PG-13, 123 min. Reviewed this week in Section 1. a Century 12 and CineArts 6, Crown Village 18, Davis, Gardens 1-6, Landmark’s Century Centre, River East 21, ShowPlace 14 Galewood Crossings. –Jonathan Rosenbaum … Read more » 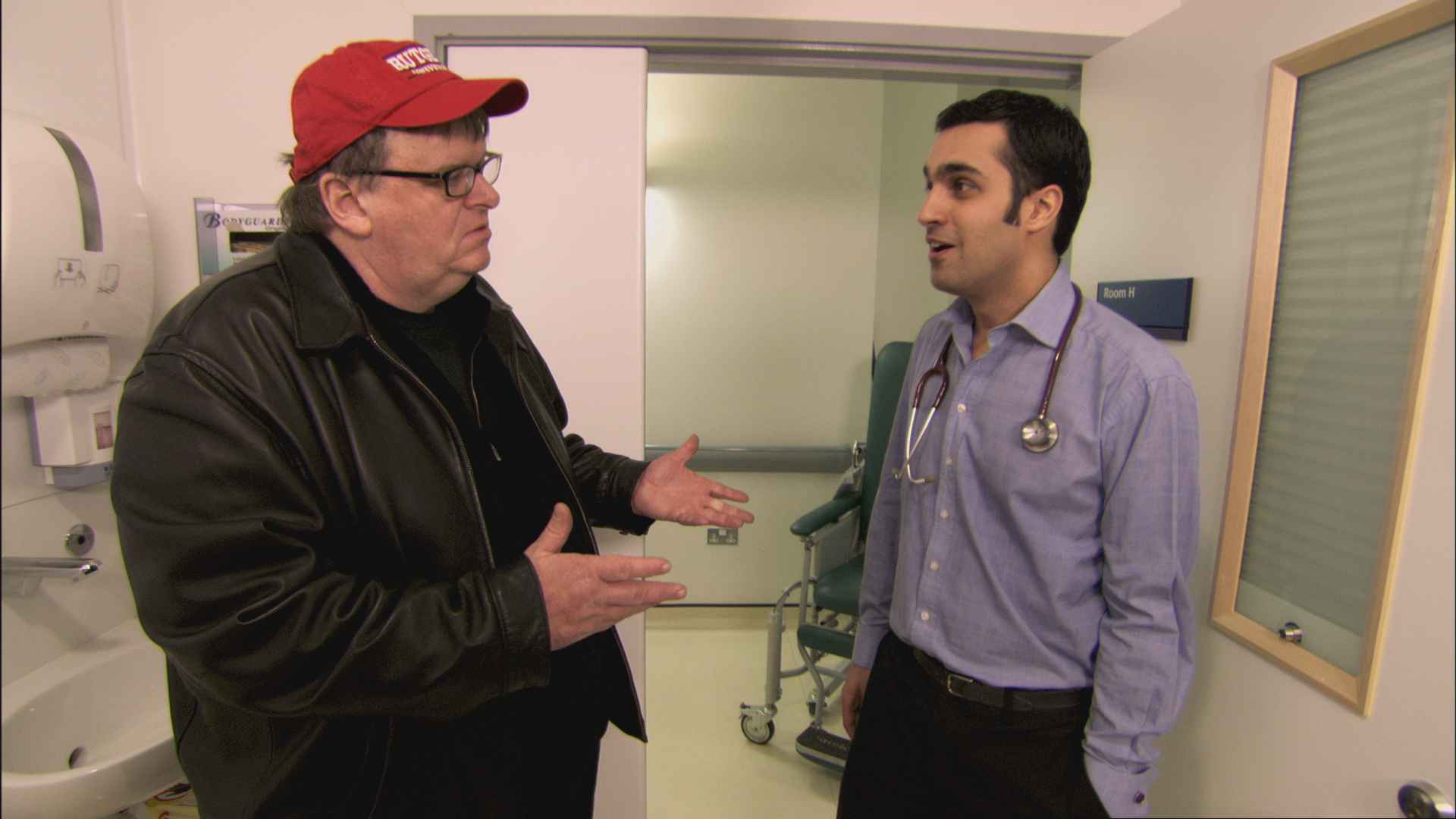 It’s an honorable tactic and the arguments are strong. But when he finally turns up in the flesh, there’s something even more rancid than usual about the way he plays dumb.… Read more »

A pretty but not very distinctive singer-composer (Heather Graham) moves to LA from Cleveland to find fame and fortune. She winds up getting involved with an unbalanced drug addict (Jeremy Sisto) and leaves him to wait tables. Most of this dreary downer, directed by Alan White from a Drew Pillsbury script, is as banal as it sounds, and needlessly complicated rather than enhanced by a fractured chronology. Things are only minimally enlivened by the customers who frequent the graveyard shift at the diner where the heroine worksthe dregs of the music industry and related fringe groups. With Tess Harper, Linda Hamilton, and Jake Busey. R, 97 min. (JR)… Read more »

John Dahl’s previous neonoirs have been too cynical for me, but this crime comedy has such a goofy script (by Christopher Markus and Stephen McFeely) and such an eccentric cast that it kept me curious about what would happen next. An alcoholic Polish-American hit man in Buffalo (Ben Kingsley) gets sent to San Francisco by his uncle and boss (Philip Baker Hall) to dry out. Thanks to Alcoholics Anonymous and the funeral home where he gets a job, he winds up with a strange assortment of company, including a gay man (Luke Wilson), a real-estate broker (Bill Pullman), and a well-to-do lover (Tea Leoni). Even if you can’t accept all the movie’s curveballs, you might still be amused. With Dennis Farina and Alison Sealy-Smith. R, 92 min. (JR)… Read more »

I Will Avenge You, Iago!

Expanded from a half-hour comedy sketch, Zhenya Kiperman’s over-the-top knockabout farce (2005) about an opera star playing Iago (Larry Pine), his wife (Michi Barall), a psychotic audience member (Keith Nobbs), a burglar (Kate Hodge), and various others might have made me laugh if the characters were sufficiently compelling or believable to transcend their plot functions. But it’s typical of Kiperman that the moment the Empire State Building appears to establish the New York setting, we also hear a snatch of Rhapsody in Blue on the soundtrack; the occasional patches of Dixieland are no less Woody Allenish, at least in aspiration. 95 min. (JR)… Read more »

If you’ve ever wondered about the backstory behind all the fine print on containers of E.H. Bronner’s peppermint soap, Sara Lamm’s 2006 documentary tells you everything you’d want to know and then some. And the story being told is certainly a singular one. Bronner, a German Jewish immigrant and onetime mental patient, abandoned his children to produce and sell his soap and spread his ideas about humanitarianism. Today his son Ralph qualifies as one of his most ardent disciples. For better and for worse, this is a movie that raises almost as many questions as it answers. 88 min. (JR)… Read more »

The first (1918) and by most accounts best of the three Hollywood versions of the Maurice Maeterlinck fantasy play, directed by the great Maurice Tourneur. Generally considered a masterpiece, it tells the story of two poor children taught by a fairy on Christmas Eve how to see the world through the eyes of God. 75 min. (JR)… Read more »

In this farcical sequel to Bruce Almighty (2003), God is still a janitor played by Morgan Freeman, but the Buffalo newscaster played by Jim Carrey is now a Buffalo newscaster-turned-congressman played by The 40-Year-Old Virgin’s Steve Carell. As soon as the hero arrives with his family in a Virginia suburb to change the world, God orders him to build an ark, and then sends loads of animals in pairs after him until he obeys. Freeman’s God is a mix of Old and New Testament, with a dash of both sexism and sitcom; Carell’s Noah is a political fool, but that only proves he’s honest and sincere. This is idiotic, but it’s so good-natured I didn’t mind. Directed by Tom Shadyac from a script by Steve Oedekerk; with Lauren Graham, John Goodman, John Michael Higgins, and Wanda Sykes. PG, 88 min. (JR)… Read more »

Michelangelo Antonioni’s 1961 follow-up to L’Avventuraand middle feature in a loose trilogy ending with Eclipserepeats many of the melancholic themes of its predecessor, with particular emphasis on the boredom and atrophied emotions of the rich. The results are somewhat more mixed, though on the whole the performances are betterwhich may not matter so much in an Antonioni context. The minimal plot, restricted to less than 24 hours, involves the death of passion between a successful novelist (Marcello Mastroianni) and his frustrated wife (Jeanne Moreau). The best parts of this movie tend to cluster around the beginning and end, and include the novelist’s brief encounter with a nymphomaniac patient at a hospital and his longer encounter with the daughter (Monica Vitti) of an industrialist at a party; one of the worst is a walk taken by the wife around Milan, full of symbolic and pretentious details. In Italian with subtitles. 122 min. (JR)… Read more »

A good half century has passed since I’ve read any Nancy Drew mysteries, an endless series that’s been appearing since 1930, and frankly I wasn’t expecting Andrew Fleming’s ‘Scope movie, written with Tiffany Paulsen, to stir up many memories of them. But this is a loving, uncondescending tribute to the novels’ sweetness and hokeyness and an excellent piece of genre filmmaking. Nancy (Emma Roberts) accompanies her geeky dad (Tate Donovan) to Hollywood, where they rent the former mansion of a late movie star who’s died mysteriously and the girl sleuth solves the case. The postmodernist evocations of the past (roughly the 50s through the 80s) are a charming mishmash, delivered with wit and style. With Josh Flitter and Barry Bostwick. PG, 99 min. (JR)… Read more »

Oscar-winner Marion Cotillard tears up all the available scenery in this overblown, achronological biopic of French pop singer Edith Piaf. Whether sincere or cynical, the movie is a near parody of the Je ne regrette rien/This is Mrs. Norman Maine school of female suffering and camp mortification: the heroine grows up in grandma’s brothel, sings on the streets, gets discovered by an entrepreneur (Gerard Depardieu no less), loses or gets snatched away from loved ones, becomes dependent on drink and drugs. Director-cowriter Olivier Dahan lamentably leapfrogs past most of the German occupation, when Piaf was a courageous member of the resistance. With Sylvie Testud and Emmanuelle Seigner. In French with subtitles. 140 min. (JR)… Read more »