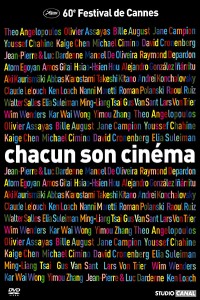 Go to French Amazon or FNAC, both of which charge 19.99 Euros plus postage [2016 note: Alas, that price has nearly tripled by now] for a delightful DVD containing all 32 of the three-minute movies commissioned by Gilles Jacob, former director of the Cannes film festival, to precede many of the features at Cannes this year. The loose thematic hook is the darkness inside a movie theater, and the lineup of filmmakers is impressive: in alphabetical order (and please forgive me not including any links here — life is too short), Theo Angelopoulos, Olivier Assayas, Bille August, Jane Campion (the only woman, alas), Youssef Chahine, Chen Kaige, Michael Cimino, David Cronenberg, Jean-Pierre and Luc Dardenne, Manoel de Oliveira, Raymond Depardon, Atom Egoyan, Amos Gitai, Hou Hsiao-hsien, Alejandro Gonzalez Inarritu, Aki Kaurismaki, Abbas Kiarostami, Takeshi Kitano, Andrei Konchalovsky, Claude Lelouch, Ken Loach, Nanni Moretti, Roman Polanski, Raul Ruiz, Walter Salles, Elia Suleiman, Tsai Ming-liang, Gus van Sant, Lars von Trier, Wim Wenders, Wong Kar-wai, and Zhang Yimou. (Incidentally, if you click on and enlarge the illustration here, all of these names become magically visible.) And there’s even a bonus: longer and/or alternate versions of the shorts by Cimino (one of the best, involving the filming of a volatile Cuban band, intercut with the lead singer watching the film of the band in the same theater), Gonzalez Inarritu, Hou (who offers us a black-and-white version of his elaborate period re-creation of the front of a large cinema), and Suleiman (who presents his alternately droll and sinister variations on gags by Buster Keaton and Jacques Tati).

The funniest, by far, is David Cronenberg’s At the Suicide of the Last Jew in the World at the Last Cinema in the World, with the director himself in the title role. And the overall level of quality as well as ambition is unusually high. Some are elaborate homages to particular films playing in the designated cinemas; in the Dardenne brothers segment, we can hear the soundtrack of Bresson’s Au Hasard Balthazar, while others give us choice audio fragments from Godard’s Contempt and Alphaville or the credits for Fellini’s 8 1/2. Egoyan gives us a very intricate story about a couple at different movies communicating with each other by text messaging (and to complicate matters more, one of them is watching Anna Karina in Godard’s Vivre sa vie watching Antonin Artaud in Carl Dreyer’s The Passion of Joan of Arc). Chahine manages a tribute to himself, Gitai and Wenders deliver elaborate political lessons, Lelouch and Wong are both at their most romantic (while Kiarostami focuses on all sorts of females watching an unseen and possibly imaginary film of Romeo and Juliet). Moretti gives us one of his diaries, and the Assayas and Kaurismaki bits are similarly so characteristic that we can recognize their directors well before the final credits of each.

Is the Coen brothers’ short, ‘World Cinema’, on the DVD? It’s listed on the IMDB as part of ‘To Each His Own Cinema’, but I’ve read about someone getting the film on DVD with that short missing.
Posted by Pacze Moj on 06/04/2007 at 10:17 PM
No, the Coen brothers short is missing. I don’t know why. Could they be holding out for using it as a bonus for the DVD of “No Country for Old Men,” their new feature?
Posted by Jonathan R. on 06/04/2007 at 11:34 PM
The great french-german tv-station ARTE already aired “Chacun son cinÃ©ma” last saturday night, but i haven’t seen it yet. It’s the best tv-channel we’ve got, because it’s bilingual and very culture-oriented!
Posted by Matthias on 06/05/2007 at 12:19 AM
Ah, Europe: you’re cinema-spoiled with your ARTE and your RAI! Would holding the short until the release of their own film on DVD be worthwhile for the Coens? I don’t suppose [m]any people will buy the DVD for just that short. Couldn’t the short be released it on both DVDs, or does some kind of legal/rights issue erupt?
Posted by Pacze Moj on 06/05/2007 at 12:43 AM
I’ve just seen the Cronenberg short, it’s wonderfully dark and funny. Are there any feature-length media parodies of recent years that you recommend? The Truman Show had some great visuals but was quite light overall. The Second Civil War was excellent (but sadly hardly known). Anything in the past ten years of that calibre?
Posted by Alef on 06/09/2007 at 1:47 AM
Hi Alef. (For other readers of this blog, he’s my nephew, living in London.) I would suggest other movies of Joe Dante, who directed The Second Civil War: especially Gremlins II, Matinee, Small Soldiers, and Loony Tunes: Back in Action.
Posted by Jonathan R. on 06/10/2007 at 8:47 PM
Jonathan, I almost agree with you that Cronenberg’s is the funniest, but I think Oliveira’s is more inteligent and funnier, and both say something about cinema and history, and they are not narcisist, although Cronenberg plays the only visible role in his film. And thinking about narcisism, it’s quiet fascinanting to see how and think why so many filmmakers in these colective film have express their tribute to cinema taking themselves as a subject. Kitano’s, for instance, which is silly and lovely. And, of course, the king of Narcisism: the hyperbolic self referential Lars von Trier’s film, a shameful short about himself, not cinema, not even Cannes 60th birthday.
Posted by Roger Koza on 06/16/2007 at 8:32 AM