A waspish, small-time paparazzo (Steve Buscemi) adopts a good-natured, homeless, and seemingly clueless actor (Michael Pitt) as his live-in assistant, only to find his protege quickly outclassing him. This 2006 comedy by Tom DiCillo purports to give us the lowdown on Manhattan celebrity life, yet it depends so consistently on plot contrivances and other movies (The King of Comedy, Midnight Cowboy, even All About Eve) that it often comes across as wannabe muckraking. Alison Lohman plays the most conspicuous celebrity, a pop diva, but Gina Gershon is a lot sexier as a world-weary casting director. 107 min. (JR)… Read more » 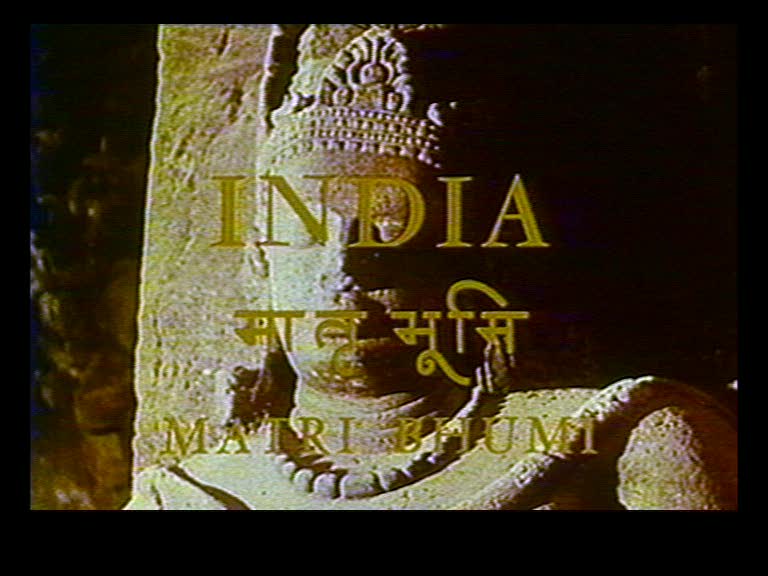 WITH A NONPROFESSIONAL, UNCREDITED CAST

From the beginning film has owed part of its fascination to its ambiguous marriage of documentary and fiction. Just after the war Roberto Rossellini came to prominence as a filmmaker through combinations of this kind. His best-known early works, Open City (1945) and Paisan (1946), are associated with the style popularly known as Italian neorealism, but through the 50s Rossellini experimented with increasingly adventurous mixes of reality and invention, culminating in 1959 with India Matri Bhumi, whose title means “India, Mother Earth.” It’s a sublime symbiosis of fable and nonfiction that poetically inter-relates humans and animals, city and village, society and nature.

At war’s end Rossellini was primarily concerned with the human devastation in Italy and Germany. But once he began working with Ingrid Bergman, with whom he was living after their affair busted up both their marriages, domestic issues started coming to the fore, particularly in such features as Europa 51, Voyage to Italy, and Fear. The Bergman films flopped both critically and commercially, though for the young critics of Cahiers du Cinema they were models of personal independent filmmaking that would help spark the French New Wave.… Read more »

My favorite Roberto Rossellini film is perhaps the hardest one to see–the restored French version of this 1959 masterpiece about India, which survives in only one unsubtitled print. (The more accessible Italian version is considerably shorter, and inferior in other respects as well.) Fortunately, the French version has been privately subtitled on video by Rossellini biographer Tag Gallagher, and Chicago Cinema Forum will project it twice this weekend. A sublime symbiosis of fable and nonfiction, India Matri Bhumi simply and poetically interrelates humans and animals, city and village, and society and nature over four separate stories. This visionary work is especially striking in the way its objective and subjective narrators merge into one another, reflecting not only the idea of reincarnation, but also the greater unity to which all of them belong. In French with subtitles. 95 min. Reviewed this week in Section 1. a Fri 8/31, 10:30 PM, and Sun 9/2, 7:30 PM, Chopin Theatre, 1543 W. Division, 773-278-1500 or 312-480-1966. –Jonathan Rosenbaum … Read more »

Gross-out comedy about male discomfort with female sexuality dominates this horror anthology scripted by Dennis Bartok. Joe Dante directed the frame–about a movie-studio tour, guided by Henry Gibson, in which customers can escape from a haunted house only by telling a gruesome story–and Monte Hellman directed the best segment, premised on the early Hollywood career of Stanley Kubrick. Their craft gives this feature most of its interest, though bad-movie buffs may enjoy the stylistic overkill of Ken Russell’s tale about a starlet getting transplanted breasts that prove deadly to others, and the other standard-issue crudities and improbabilities found in John Gaeta’s and Sean C. Cunningham’s stories. With John Saxon. 105 min. (JR)… Read more »

To all appearances, Canadians Debbie Melnyk and Rick Caine set out to make a documentary sympathetic to Michael Moore but were stymied by his avoidance tactics, his fudging of certain facts, and his determination to control his image. As a result this video is useful but limited muckraking: Moore’s politics in general, and his films, writing, and TV work in particular, are neglected or sidestepped, overtaken by (or at least seen too exclusively through) the quirks in his personality. This leads me to wonder whether the more pleasant portrait Caine and Melnyk originally had in mind would have received or warranted as much interest as this one. 96 min. (JR)… Read more »

Dean Martin and Jerry Lewis star in a loose remake (1955) of The Major and the Minor, with Lewis improbably disguised as a 12-year-old boy and hidden away at a girls’ boarding school to escape the clutches of diamond thief Raymond Burr. Lewis is brilliantly and characteristically all over the place, while Martin, as a teacher, is so marginal that one can see why he was becoming estranged from his partner. Norman Taurog directed; with Diana Lynn and Nina Foch. 97 min. (JR)… Read more »

The box office success of An Inconvenient Truth (2006) is gratifying but hardly means that the problem of global warming is even close to being addressed, much less solved. This documentary by Leonardo DiCaprio (producer, writer, on-screen narrator) and Nadia Conners and Leila Conners Petersen (writer-directors) continues the earlier movie’s campaign, and though the filmmaking isn’t everything it might have been (the opening montage is especially clumsy), their argument is compelling, absorbing, and urgent. Stephen Hawking and Mikhail Gorbachev are among the commentators, and despite the alarming facts presented, the filmmakers take pains not to foster fatalistic gloom, concentrating on some of the progressive solutions still available to us. PG, 95 min. (JR)… Read more »

Or, the Latino family that preys together stays together. Twenty-one years after a drug dealer gets gunned down in the Bronx, his widow (Blood Work’s Wanda De Jesus) and teenage son (Rick Gonzalez) are menaced by his killers, who’ve belatedly tracked them down in their suburban home, and they decide to fight back. John Singleton produced and Franc. Reyes (Empire) wrote and directed this lopsided effort, where more care seems to have been taken with the cut of Gonzalez’s sideburns than with the shape of the story, and the hyperbolic soundtrack does most of the work of the mise en scene. Pistol-packing De Jesus evokes Pam Grier in spots but certainly holds her own. R, 108 min. (JR)… Read more »

Among the many offhand virtues of Julie Delpy’s first feature as solo writer-director is the fact that she’s as attentive to French foibles as American ones. She and Adam Goldberg play a New York couple, returning from a holiday in Venice, whose cultural and temperamental differences begin to drive them apart during a stay in Paris with her mother and father (played by Delpy’s actual parents). This lacks the sweetness and terseness of Richard Linklater’s Before Sunset, which Delpy cowrote, but it’s more satirical and casual in its approach, and Delpy’s grasp of the material is assured. R, 96 min. (JR)… Read more »

Wealthy New Yorkers don’t often get skewered so mercilessly as in this comedy by writing and directing duo Shari Springer Berman and Robert Pulcini (American Splendor), but the audacity turns out to be deceptive and formulaic. Adapted from a novel by Emma McLaughlin and Nicola Kraus, and framed as a pseudoethnographic exercise, the story follows a New Jersey girl (Scarlett Johansson) who’s hired as a nanny by Upper East Side monsters (Laura Linney and Paul Giamatti). The characters are instantly reversiblethe bratty kid turns out to be a sweetie pie, the mother just needs to be told off. Only Giamatti, as the cliched businessman husband, is irredeemable, and he’s offset by the heroine’s dreamy beau (Chris Evans), who lives in the same building. PG-13, 106 min. (JR)… Read more »

The Gypsy docu-musical Latcho Drom (1993) was appealing for its graceful combinations of music and information, documentary and fiction, the history of Romany migrations over the past millennium and the poetic passing of seasons. This far more modest 2006 documentary by Jasmine Dellal charts the progress of five Romany bands touring the U.S. and intercuts footage of them back home with their families in India, Macedonia, Romania, and Spain. As a concert film it’s often frustrating, because performances are quickly overtaken by voice-overs. But for its glimpses of various lifestyles and personalitiesan ancient but spry fiddler, a young male who performs in dragit isn’t bad. Subtitled. 110 min. (JR)… Read more »

Though it may not equal the sublimity of his three last features, Luis Bunuel’s masterpiece Belle de Jour (1967, 100 min.) remains a seminal work that clarifies his relationship with Hitchcock. Like Hitchcock, Bunuel was a prude with a strong religious background and a highly developed sense of the kinky and transgressive; what he does here with Catherine Deneuve parallels Hitchcock’s encounters with Tippi Hedren. Adapting a novel by Joseph Kessel, Bunuel and Jean-Claude Carriere recount the story of Severine, a frigid but devoted upper-class housewife (Deneuve) who secretly works at a high-class brothel to satisfy her masochistic impulses. Placing her fantasies, dreams, and recollections on the same plane as her everyday adventures, Bunuel comes closer to the French New Wave than he does before or after, and much of his secondary cast reinforces this association, including Michel Piccoli, Macha Meril, and Pierre Clementi as a dandyish gangster. Belle Toujours (2006, 70 min.), Manoel de Oliveira’s sequel–or tribute, or speculative footnote–is less about Severine (played here by Bulle Ogier) than about Henri Husson (Piccoli again), a rakish aristocrat who discovers her secret. (It’s also more about class and less about sexual desire.) Husson arranges a meeting with a reluctant Severine many decades later, and Oliveira stages their dinner like a lush religious ceremony, albeit one with a couple of witty and pungent punch lines.… Read more »

In Interkosmos, Chicago filmmaker Jim Finn used pseudodocumentary to create a hilariously dry form of speculative comedy. In this video any humor that might have been on his mind eluded me, but the pseudodocumentary uncovers a fascinating subject: an all-female Maoist terrorist group in Peru, most of them Indians, who were imprisoned in the late 1980s and turned their cell block into a guerrilla training camp that also held dances and staged Shakespeare plays (the title translates as The Shining Trench of President Gonzalo). Shot in New Mexico and based on detailed research, this fictionalized, theatrical depiction of their activities isn’t so much narrative as exposition and spectacle, engaging mainly because of its creepy subject matter. In Spanish and Navajo with subtitles. 60 min. (JR)… Read more »

Press notes describe Ray Cheung’s 2006 debut feature as a quirky, stir-fried journey of self-discovery and, ultimately, a makeover of the British-Chinese gay experience. Translate that addled jargon into movie terms and you’ve got an assortment of casual riffs on the London milieu of various Chinese homosexuals and transsexuals. Unfortunately the movie’s more interesting and challenging social aspects, which imply more than one British-Chinese gay experience, are often overtaken by its smarminessincluding the aggressive deployment of a banal score and the way some actors have apparently been encouraged to overwork their eyebrows. 86 min. (JR)… Read more »