Made for Swedish television, this three-part video documentary (2004) is widely regarded as the best treatment of the theater and film director’s life and work. Culled from a considerable amount of interview and archival material, it’s split between Bergman’s films, his more extensive (and, many would say, more important and accomplished) theater work, and his life, in that order. Marie Nyrerod is the sole credited director, though Bergman is rumored to have had some hand in the proceedings. In Swedish with subtitles. 174 min. (JR)… Read more »

Filmmaker Azazel Jacobs calls this a story about stolen love and stolen identities shot on stolen film. He’s the son of Ken Jacobs (Star Spangled to Death), with some of his pa’s anarchic spirit, and because he apparently stole good 35-millimeter stock, he doesn’t have to worry that much about the story anyway. The slender premise — two guys are named Rodolfo, one of whom gets renamed Depresso by the girlfriend of the other — seems mainly an excuse to hang out with these people, and it’s a tribute to Jacobs’s skill that this is enough. He knows how to put air around his characters, pace their movements, and chart their interactions in various locations, and when the heroine starts dancing at one point, she’s so good that I wanted to cheer. 77 min. (JR) 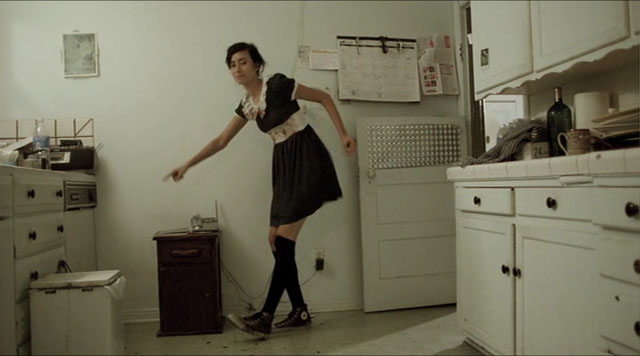 Interspersed with experimental fairy-tale segments using cutout animation, this ambitious, underlit first feature by musician Tim Kinsella mostly consists of postapocalyptic dysfunctional-family drama. Despite some striking music and edgy performances, the fact that terms like postapocalyptic and dysfunctional family spring so readily to mind makes the narrative armature feel more generic than it apparently wants to be. Packed with filmmaking ideas, Kinsella’s strange object oscillates between stylistic and thematic concerns that rarely mesh, though a lively and busy surface is fairly constant. In other words, I was sometimes bored by the story but never by the movie. 99 min. (JR)… Read more »

I’m a sucker for fantasies, but this one is so undistinguished and arbitrary that it left few traces in my consciousness, apart from the impression that the filmmakers resort to cruelty whenever they run out of ideas, which is often. Derived from a Neil Gaiman novel, the story involves a wall separating a mundane English village from a supernatural parallel universe on the other side. This might have been interesting if the production were unified by a particular style or vision, but it’s nearly all filigree, including the decorative overload of stars (Claire Danes, Sienna Miller, Peter O’Toole, Michelle Pfeiffer, Robert De Niro, Rupert Everett, Ricky Gervais). At least Pfeiffer and De Niro seem to be enjoying themselves. Matthew Vaughn (Layer Cake) directed and contributed to the script. PG-13, 130 min. (JR)… Read more »

Barry J. Hershey auditioned 184 actresses in five European and American cities for parts in a narrative feature, and this 2006 documentary, consisting of snippets from their tryouts, shows why film and theater professionals commonly refer to these events as cattle calls. All the young women are attractive and many are talented, but Hershey’s montages of their movements and behavior depersonalize and even dehumanize them even as they clarify his power, which almost turns them into prostitutes. I thought I’d enjoy this, but it wound up giving me the creeps. 86 min. (JR)… Read more »

In Meantime (1983), Mike Leigh explored what might produce a skinhead in London’s East End. Harking back to the same year on the north coast of England, where he grew up, writer-director Shane Meadows (Once Upon a Time in the Midlands) builds on his own memories of what turned him into a skinhead, making his hero (Thomas Turgoose) a lonely outcast who’s recently lost his father in the Falklands war. The way this 12-year-old on summer holiday falls under the protective influence of first one relatively gentle gang leader (Joe Gilgun), then an ex-con more prone to rapid mood swings and racial hatred (Stephen Graham), is masterfully charted and acted, as are the boy’s early forays into sex. The film falters only when it drifts too predictably into a coming-of-age moral fable. 102 min. (JR)… Read more »

Chris Eigeman, a key actor in the movies of Whit Stillman and Noah Baumbach, finally gets to show his range in this romantic comedy, adapted from Daniel Menaker’s first novel. The tone is set in the opening scene, when Eigeman’s character, who teaches English and coaches basketball at a Manhattan prep school, runs into an ex-girlfriend. “Are you seeing anybody?” she asks. “I mean therapy. Are you seeing a shrink?” In fact he’s engaged in Freudian psychoanalysis with a comically punitive Argentinean (Ian Holm), and when he gets involved with a wealthy widow (Famke Janssen), both the shrink sessions and the movie shift into high gear. John Zorn’s ethnically tinged score is effectively minimalist without succumbing to Philip Glass-style monotony, and Harris Yulin is effective as the hero’s semi-estranged father. Oren Rudavsky directed. 86 min. a Landmark’s Century Centre. –Jonathan Rosenbaum … Read more »

Before getting swamped by overproduced CinemaScope features, Jean Negulesco was a skillful director of noirs and other small pictures, as evidenced by Road House (1948) and this neglected drama about a couple on the run (1947). Ida Lupino plays a poor, eccentric 22-year-old in rural California, traumatized by abusive and dysfunctional parents (Henry Hull and Faye Bainter), who falls for a sensitive but volatile escaped convict (Dane Clark). If you can get past the obtrusive Max Steiner score and a surfeit of dog reaction shots, this has a feeling for outcasts and strong, quirky performances that build to the kind of affecting and socially subversive romantic melodrama Nicholas Ray excelled at. With Wayne Morris. 104 min. 16mm. Also on the program: Cell Bound (1955), one of Tex Avery’s creepier and more manic cartoons. a Sat 8/11, 8 PM, LaSalle Bank Cinema. –Jonathan Rosenbaum … Read more »