There Will Be Blood

From the Chicago Reader (January 3, 2008). I much prefer this film to Paul Thomas Anderson’s next feature, The Master, an incoherent mess with fewer compensations (despite the heavy breathing from some of my colleagues, who have compared it to Herman Melville); but for my money, neither film holds a candle to Magnolia.  — J.R.

Paul Thomas Anderson’s fifth feature, a striking piece of American self-loathing loosely derived from Upton Sinclair’s Oil!, is lively as bombastic period storytelling but limited as allegory. The cynical shallowness of both the characters and the overall conception — American success as an unholy alliance between a turn-of-the-century capitalist (Daniel Day-Lewis) and a faith healer (Paul Dano), both hypocrites — can’t quite sustain the film’s visionary airs, even with good expressionist acting and a percussive score by Radiohead’s Jonny Greenwood. Day-Lewis, borrowing heavily from Walter and John Huston, offers a demonic hero halfway between Thomas Sutpen in Faulkner’s Absalom, Absalom! and James Dean’s hate-driven tycoon in Giant (shot on the same location as this movie), but Kevin J. O’Connor in a slimmer part offers a much more interesting and suggestive character. This has loads of swagger, but for stylistic audacity I prefer Anderson’s more scattershot Magnolia. R, 158 min. (JR) 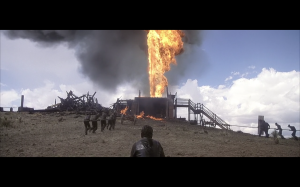