I came upon this book quite by chance yesterday, while browsing through a bookstore. Although    I have three earlier collections of Forugh Farrokhzad’s poetry in English (BRIDE OF ACACIAS, translated by Jascha Kessler with Amin Banani, Delmar, NY: Caravan Books, 1982; A REBIRTH, translated by David Martin, Costa Mesa, CA: Mesa Publishers, 1997; and REMEMBERING THE FLIGHT: TWENTY POEMS BY FORUGH FARROKHZAD, translated by Ahmad Karimi-Hakkak, Port Coquitlam, B.C., Canada: Nik Publishers, 1997), and one book in English about her poetry (A LONELY WOMAN: FORUGH FARROKHZAD AND HER POETRY by Michael C. Hillmann, Washington, D.C.: Three Continents Press and Mage Publishers, 1997), all these books have been and remain extremely difficult to come by, and apart from the Hillman (jn an earlier edition), none of these is even mentioned in the “Recommended Reading” at the end of this new volume.

It’s a sad fact that while apparently you can go into any good-sized bookstore in Iran and expect  to find translations of the major works of William Faulkner (or so I’ve been told by Iranian friends), finding any translated book by the most important Iranian woman poet of the 20th century (1935-1967) in even a large American bookstore has been virtually impossible up until now. And indeed, before the publication of STRANGE TIMES, MY DEAR: THE PEN ANTHOLOGY OF CONTEMPORARY IRANIAN LITERATURE (edited by Nahid Mozaffari and Ahmad Karimi Hakkak, New York: Arcade Publishing, 2005)–a collection that doesn’t include any of Farrokhzad’s poetry, because she died over 40 years ago–there has been little else available in Iranian literature apart from books by Rumi and Sadegh Hedayat’s remarkable novella THE BLIND OWL.

As a mythical, iconic, controversial, and transgressive figure in Iranian culture, Farrokhzad (or Forugh, as many Iranians prefer to call her) seems to suggest at one and the same time such figures as Joan of Arc, Bessie Smith, and Marilyn Monroe -– a feminist martyr, both soulful and erotic, reminding one of the potency of poetry in that culture that virtually places it in competition with religion. My own interest in her poetry was largely sparked by her extraordinary short film   THE HOUSE IS BLACK and the recitation of the title poem (which is hers) in Abbas Kiarostami’s   THE WIND WILL CARRY US, translated in this volume as “The Wind Will Blow Us Away”, and its raw power continues to excite me.

The title poem in this collection is the first one included, and one of the earliest. It begins:

I have sinned a rapturous sin

in a warm enflamed embrace,

sinned in a pair of vindictive arms,

I wonder what Hilary Clinton might think of this poem. I also wonder whether, when she stated back in April that “we would be able to totally obliterate” Iran –- a country of almost 66 million people that is even more multicultural than the U.S. (and if you don’t believe me, check out the C.I.A.’s own figures: page down to “ethnic groups” and “languages”, then compare them to the   U.S. figures, here) -– she would include Forugh’s poetry in this conflagration. After all, as   someone once said, Stuff happens. [5/29/08] 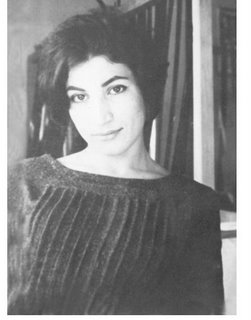