My Two Cents Worth on Daves’ BIRD OF PARADISE 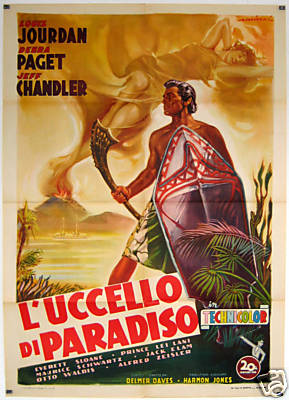 I’m glad that Dave Kehr’s recent column in the New York Times about the neglected and underrated Delmer Daves has spurred some interest in Daves on his web site, but disappointed that no one except for me has thought to bring up Daves’ 1951 remake of King Vidor’s 1932 Bird of Paradise. It’s true that I have some personal investment in this kitschy South Sea island tale, having written the first chapter of my autobiographical Moving Places: A Life at the Movies (1980; 2nd ed., 1995) about its significance for me. But the second chapter of the same book, a much longer one, is devoted to that same year’s Doris Day musical On Moonlight Bay, and I’d never dream of making any special case for that movie.

By contrast, what seems memorable about the 1951 Bird of Paradise, apart from its lush Technicolor, is a certain tragic sense of thwarted utopian and liberal multiculturism, similar in some ways to what can be found in Daves’ previous feature, also with Debra Paget and Jeff Chandler (and made at the same studio, Fox), Broken Arrow (1950). I suppose this could be written off as some sort of camp in both movies, but personally I find this less of a hoot than Daves’ penultimate feature, Youngblood Hawke (1964), which Dave describes as “interesting” and, like some of the posters on his site, seems to take relatively seriously. Chacun à son gout. [1/28/09] 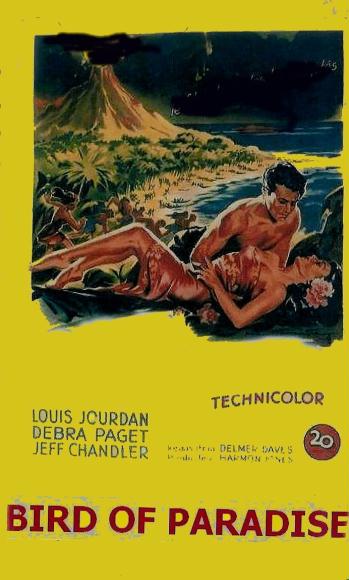