Recommended Reading: AND THEN THERE WAS NO ONE 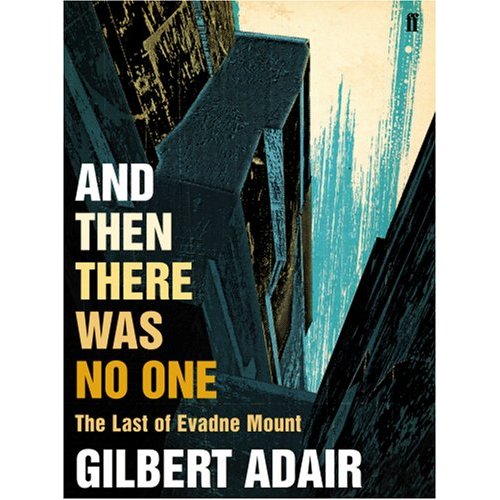 The third and most enjoyable of Gilbert Adair’s Evadne Mount mysteries, just published in the U.K., is by all counts the least satisfying or conventional as a mystery—even though Adair, who features himself as first-person narrator, largely compensates for this by shoe-horning in a rather brilliant pastiche of a Sherlock Holmes tale in the fourth chapter, roughly a third of the way through.

Adair is a master of pastiche whose best-known previous novels (and even one of his non-fiction books, Myths and Memories) all derive from literary models, so that Alice Through the Needle’s Eye is a brilliant Lewis Carroll spinoff, The Key of the Tower is an hommage to Alfred Hitchcock, and even his two best-known books, both made into films, The Dreamers (known in an earlier version as The Holy Innocents) and Love and Death on Long Island, are derived respectively from Jean Cocteau’s Les Enfants Terribles and Thomas Mann’s Death in Venice.  The Evadne Mount novels, the first two of which are The Act of Roger Murgatroyd and A Mysterious Affair of Style, are all to varying degrees nods to Agatha Christie, to whom the latest is dedicated, but the postmodernist tricks and games with form, genre, and language tend to overtake the mystery elements—especially in the third, which gradually evolves into a rather merciless and scathing autocritique by Adair of his own literary narcissism as voiced by lady detective Mount, his own creation.

In the interests of full disclosure, I should add that Adair was a good friend of mine when we were both living in  Paris in the mid-70s, part of the same circle composed of Eduardo de Gregorio, Michael Graham, and Lauren Sedofsky who met several times weekly. He was certainly as witty and clever then as he is today, but at that point he had published nothing; his only pastiche at that stage—an Alexander Pope simulation called “The Rape of the Cock”—has, to the best of my knowledge, never appeared in print, although Adair rightly includes it as part of his literary oeuvre, along with 18 other titles, and even his journalism (much of the best of which is included in his collections The Postmodernist Always Rings Twice and Surfing the Zeitgeist) hadn’t yet appeared at that point. But I think I would be just as much a fan of Adair’s work if we had never met.

Adair’s complicated and multilayered love-hatred for the U.S.—reflected in the attitudes of Gustav Stavorigin, the prizewinning Bulgarian-born English novelist, villain, and murder victim of And Then There Was No One, who is discovered dead at a Swiss-German Sherlock Holmes Festival held in 2011, where he appears as the mystery guest—can sometimes lead him into far-fetched conceits, such as the one here involving an alleged fatwa placed by a rightwing Texas millionaire on Stavorigin after the latter writes contemptously (and mostly accurately) about American idiocy in the aftermath of 9-11.  What makes this notion most implausible is the premise that many Americans, even crazed Texas millionaires, could give two hoots about what an Englishman (or, for that matter, anyone but another American) could say about 9-11, or at least enough of two hoots to motivate a fatwa. But the merit of Adair’s intellectual hijinks is that plausibility is at most a secondary issue here. What really counts is the wit and invention, which are plentiful. [1/4/09]