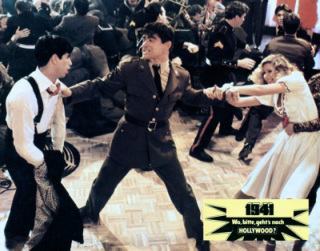 One of Steven Spielberg’s most underrated films is
not only a virtuoso piece of filmmaking but a flagrant
piece of mean-spiritedness and teenage irreverence
that underlines aspects of his work that his more popular
and commercially successful works tend to either
disguise or rationalize. Both of these qualities
are partially the contributions of cowriter Robert
Zemeckis –- who exhibits these traits more independently
on such later features as Used Cars (1980)
and Forrest Gump (1994). But there’s also a strain
that one might associate with the more progressive
and Tashlinesque reflexes of a Joe Dante, helping to
explain why John Wayne not only refused indignantly
to play in this comedy but also tried to persuade
Spielberg that making such a movie was tantamount
to spitting on the American flag. In Spielberg’s
hands, much of the comedy here seems to derive
from a desire to see large sets destroyed as if they
were Tinker toy constructions, complete with tuttifrutti
mixtures of splattered paint, and without the
messy inconvenience of either deaths or morals. But
there’s also a smaller-scale, notational form of comedy
at play here. Like me, Spielberg grew up on Mad
when it was still a comic book, and the hallmark of its
50s pictorial style, which he’s clearly emulating here,
is to stuff wisecracks that scoff at authority figures
into the edges of the frames. There’s also a cartoonist
tradition harking all the way back to Rube Goldberg
(1883-1970) in which monstrously complicated machines
perform simple tasks in strangely convoluted
ways. And much of the cast here is seminal:
John Belushi, Dan Ackroyd, John Candy, Robert
Stack, Toshiro Mifune, Christopher Lee, Warren Oates,
Slim Pickens, and even Sam Fuller. 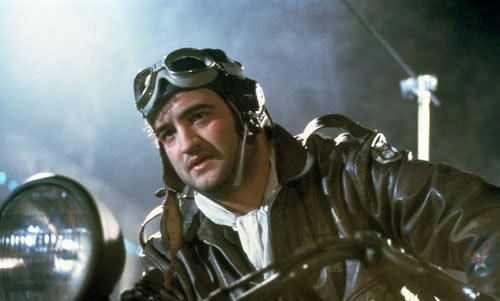 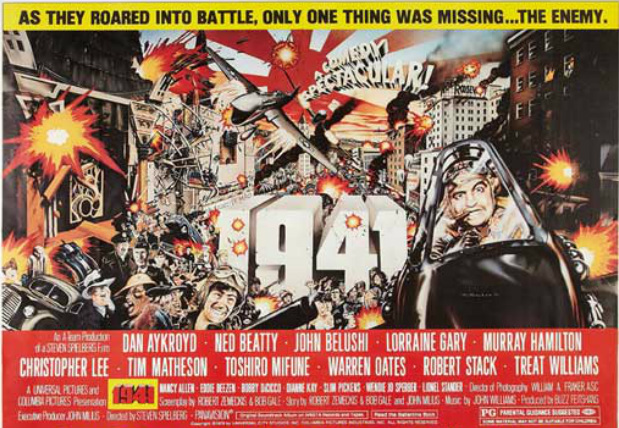