One of Abbas Kiarostami’s trickiest and most radical experimental works, this fascinating 2008 feature focuses on women spectators of a movie that we hear but don’t see—a lush and seemingly action-packed drama adapted from a famous Persian medieval poem by Nazami Ganjavi, “Khosrow and Shirin.” Typical of Kiarostami’s mastery as an illusionist is that he created the offscreen soundtrack himself, but only after he’d shot close-ups of Juliette Binoche and 112 Iranian film actresses watching the fictional film. (The makeshift audience contains some males too, but they’re never featured.) It’s as if Kiarostami had capitulated to the requests of his friendly critics that he make a movie with stars and an easy-to-follow story, then perversely turned the movie into a nonnarrative film. In Farsi with subtitles. 92 min. (JR)… Read more »

A Dialogue about Abbas Kiarostami’s SHIRIN

The following piece appeared in the October 22, 2009 issue of the Chicago Reader. Due to a technical error which was belatedly corrected (in March 2010), the Reader omitted Mehrnaz Saeed-Vafa’s name as coauthor, but I’ve restored it here. — J.R. 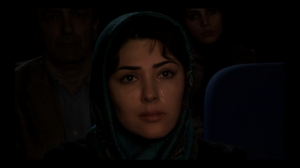 Jonathan Rosenbaum and Mehrnaz Saeed-Vafa discuss the Iranian master’s first film to screen in Chicago since 2002.

By Jonathan Rosenbaum and Mehrnaz Saeed-Vafa

It’s been six years since Mehrnaz Saeed-Vafa and I published Abbas Kiarostami (University of Illinois Press), about Iran’s most famous and most controversial filmmaker. The book combined the perspectives of myself, an American film critic with a Jewish background, and Mehrnaz, an Iranian-American filmmaker and teacher with an Islamic background, on Kiarostami’s films, which are neither narrative features nor documentaries but something in between. Where Is the Friend’s House? (1986), Close-Up (1990), Life and Nothing More . . . (1992), Through the Olive Trees (1994), Taste of Cherry (1997), and The Wind Will Carry Us (1999) keep altering the balance between what’s actually seen in a story and what’s implied or imagined, and this is part of what continues to make Kiarostami such a contested and fascinating figure. Building, perhaps, on his talent as a visual artist (he’s a photographer, painter, and graphic artist) and his interest as a chronicler of Iranian life, he’s been a nearly constant innovator in both form and subject matter.… Read more »