THE MAN FROM LARAMIE (catalogue entry)

THE MAN FROM LARAMIE 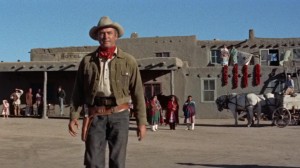 “Anthony Mann brought a touch of Oedipus Rex to almost everything he did—he was fascinated by families exploding from the inside—but in this 1955 western it’s more than a touch: he’s clearly aiming for classical resonance. Yet the film is never pretentious, perhaps because Mann is able to create characters complex enough to support the grand emotions, and because the landscape—animistic, enveloping—becomes mythic in his wide-screen framing. It’s one of Mann’s cleanest, clearest films, constructing an elaborate but ultimately lucid network of character relationships, all of them perverse. With James Stewart, Arthur Kennedy, and Donald Crisp. 104 min.” (Dave Kehr in the Chicago Reader)

This is the eight and last of Anthony Mann’s features starring James Stewart, made over a mere six years (1950-1955)—a fascinating body of work that, like Alfred Hitchcock’s uses of Stewart over roughly the same period (in Rope, Rear Window, and Vertigo) as well Cecil B. De Mille’s The Greatest Show in Earth, in which he plays a homicidal clown, would often bring out the more neurotic and disabled sides of his star persona, in contrast to his softer and usually more comic roles in most of his other films. In Mann’s case, this yielded no less than five memorable Westerns, including such masterpieces as Winchester ’73 (1950) and The Naked Spur (1953), as well as The Man from Laramie.

Mann’s distinction as a landscape artist using the full resources of both Technicolor and Cinemascope comes to the fore in the opening sequences of The Man from Laramie, where the open sky and terrain of New Mexico is subdivided mainly into elemental color values — blue (sky), various browns (ground and rocks, occasional vegetation) and white (salt lagoons) — offset mainly by the red of Stewart’s bandana and the light green of Axel Nicol’s shirt. This palette broadens significantly when we enter the nearby village, where the Mexican and Native American apparel and the furnishings of a domestic interior bring society and civilization into the mix. (Jonathan Rosenbaum)