The following article, which originally appeared in the April 20, 1990 issue of the Chicago Reader, without any star rating, is the only time I can recall writing at length in the Reader about an American TV series. (An edited version of this piece appears in a 1995 collection edited by David Lavery for Wayne State University Press, Full of Secrets: Critical Approaches to Twin Peaks, under the title “Bad Ideas: The Art and Politics of Twin Peaks“.) From a vantage point of almost two decades later, I wouldn’t be as quick today to insist that David Lynch’s work is devoid of any social commentary. What he has to say about the Hollywood community alone, especially in Inland Empire (2006), shows that he’s no longer as detached as he was.

Another invaluable tool for re-evaluation is the recent and superbly appointed Blu-Ray box set devoted to Twin Peaks. Despite some misgivings abiut the show’s second season (see, for instance, Martha Nochimson’s demurrals in her 1997 The Passion of David Lynch about some of the ways the show “perverted” Lynch’s original designs and conceptions), I continue to find much of it very absorbing. The same is true, so far, about the so-far uneven third season, despite the brilliance of the third episode.… Read more » 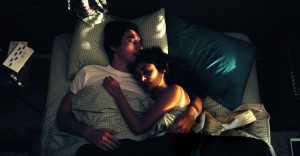 For some time now, Jim Jarmusch has been operating as an

autocritical dialectician in his fictional features. Politically as

well as commercially, The Limits of Control offers a sharp

rebuke to his preceding film, Broken Flowers, by following

Bill Murray as a protagonist — a bored and diffident Don Juan

roaming across the United States to visit four of his former

lovers, in order to discover which one he impregnated with

a son — with Isaach de Bankolé as a protagonist, a hired

assassin in Europe pursuing Bill Murray in the role of Dick

Cheney as he hides out in a bunker until the assassin

finally strangles him with a guitar string. But even more

striking is the radical contrast between Jarmusch’s most

elitist feature (and in many ways my least favorite), Only

continents in Tangier and Detroit — and Jarmusch’s

most populist feature (and one of my favorites),

Paterson, about a younger romantic couple living together

(Adam Driver) who writes poetry in his spare time and a

specializes in creating black and white décor and clothing,

and is learning to play the guitar.… Read more »