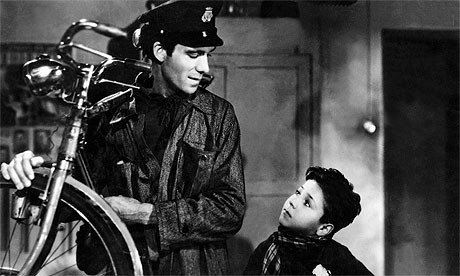 An unemployed worker (Lamberto Maggiorani) in postwar Rome finds a job putting up posters for a Rita Hayworth movie after his wife pawns the family sheets to get his bicycle out of hock. But right after he starts work the bike is stolen, and with his little boy in tow he travels across the city trying to recover it. This masterpiece -– whose Italian title translates as “bicycle thieves” -– is generally and correctly known as one of the key works of Italian neorealism, but French critic Andre Bazin also recognized it as one of the great communist films. (The fact that it received the 1949 Oscar for best foreign film suggests that it wasn’t perceived widely as such over here at the time; ironically, the only thing American censors cared about was a scene in which the little boy takes a pee on the street.) The dominance of auteurist criticism over the past three decades has made this extraordinary movie unfashionable because its power doesn’t derive from a single creative intelligence, but the work of screenwriter Cesare Zavattini, director Vittorio De Sica, the nonprofessional actors, and many others is so charged with a common purpose that there’s no point in even trying to separate their achievements. This is possibly the greatest depiction of a relationship between a father and son in the history of cinema, and it’s an awesome heartbreaker. If you set it alongside something like Life Is Beautiful you get some notion of how much mainstream world cinema and its relation to reality have been infantilized over the past half century. (JR) 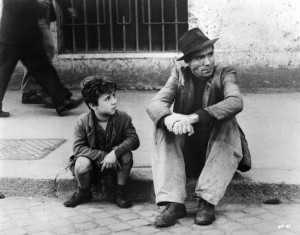