The Universe in a Cellar (THE WIND WILL CARRY US) 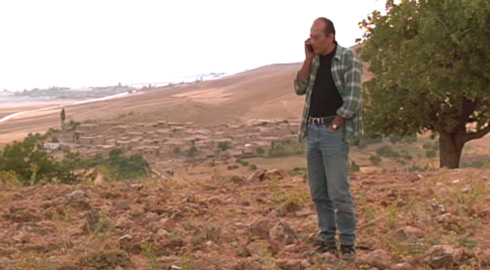 Written by Kiarostami and Mahmoud Ayedin

Paradoxically, Americans still tend to demonize Iranians at a time when Iranian cinema is becoming almost universally recognized as the most ethical in the world. It’s another sign of how limited our understanding of life outside our borders is — which only makes the varied and comprehensive images of Iranian cinema more precious.

It’s true that censorship has helped shape Iranian cinema, but that censorship has had interesting consequences. Women film characters are required to wear chadors, but ordinary Iranian women don’t wear them indoors — which has led to a good many films being set mainly or exclusively in exteriors and focused on public life and social appearances, including all of Abbas Kiarostami’s features since his 1990 masterpiece Close-up. The pivotal title sequence of his most recent feature, The Wind Will Carry Us (1999), opening at the Music Box this week, is set in a dark cellar — and that has a lot to do with what makes this scene metaphysical and momentous and poetically charged, even though practically nothing of consequence happens there.… Read more »

Blue-eyes Is Back [LAWRENCE OF ARABIA]

Thanks to a meticulous restoration carried out by Robert A. Harris and Jim Painten, working with a team of specialists that ultimately included director David Lean himself, Lawrence of Arabia has been rereleased in all its original glory in a version that includes some footage that wasn’t even seen by most of the film’s earliest audiences (the original road-show version, released in late 1962, was cut by about 20 minutes before it went into general release). I won’t dwell upon the complex detective work carried out by the restorers, except to note that in order to make the version currently playing as complete as possible, the original actors even redubbed some of their lines, which were then electronically altered so that their present voices would sound like their voices 27 years ago. Lean was also permitted to make a few minor modifications in the editing, so that the definitive version of this epic about the enigmatic T.E. Lawrence and his unorthodox military career is actually a “final cut” that incorporates practically all of the material that was in the original version.… Read more »