Afterword to THE CRADLE WILL ROCK, a screenplay by Orson Welles

Published by Santa Teresa Press (in Santa Barbara) in 1994 (twenty years later, this book is still available on Amazon) and reprinted in Discovering Orson Welles in 2007, along with the following introductory comments:

Critic Dave Kehr once said to me that encountering The Cradle Will Rock after The Big Brass Ring was a bit like encountering The Magnificent Ambersons after Citizen Kane. I appreciate what he meant — especially when it comes to this script’s nostalgia and its sharp autocritique compared to the more narcissistic and irreverent surface of its predecessor. But I hasten to add that this script, unlike The Big Brass Ring, is more interesting for its autobiographical elements than for its literary qualities. Perhaps for the same reason, writing an afterword about it was more difficult.

On the subject of Tim Robbins’s Cradle Will Rock,I’d like to quote excerpts from an article of mine that appeared in the Chicago Reader on December 24, 1999:

For the past seven months, ever since Robbins’s movie premiered in Cannes, friends and associates who saw it there have been warning me that I, as an Orson Welles specialist, would despise it. Writer-director Robbins does make the character of Welles (Angus MacFadyen) a silly boozer and pretentious loudmouth without a serious bone in his body — something closer to Jack Buchanan’s loose parody of Welles in the 1953 MGM musical The Band Wagon than a historically responsible depiction of Welles in 1937.… Read more »

As far as I know, this is the only long review of mine for the Chicago Reader that isn’t on the Reader‘s web site, and consequently it wasn’t on this site, either, until I retyped it for inclusion here. It appeared in their May 17, 1999 issue. It’s also one of the pieces selected and translated into Farsi by Saeed Khamoush for the unauthorized collection of some of my Reader pieces that was published in Iran back in 2001. – J.R. 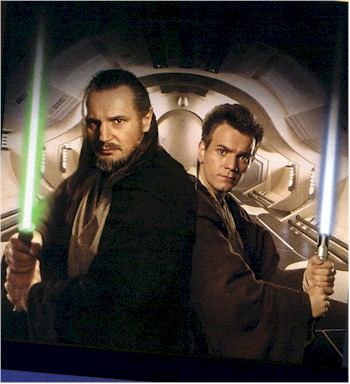 Directed and written by George Lucas

The big question about the Star War series, and The Phantom Menace in particular, isn’t how much you like it but whether you love it. The issue is above all generational, and only secondarily a matter of aesthetic or ideological choices.