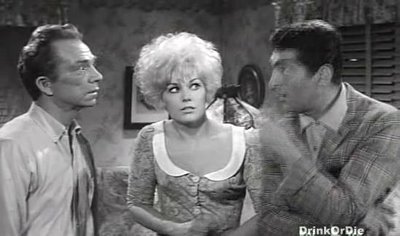 A fresh look at one of Billy Wilder’s most underrated films clarifies for me two essential facts about it for the first time: (1) It seems likely that this masterpiece mainly received a C or “condemned” rating from the Legion of Decency because of its scathing portrait of the hypocrisy of American small-town life and the corruption of big-time media, not because of its depiction of sex per se. (2) Wilder’s return to the American Southwest after his earlier Ace in the Hole (1951) is in fact a return to these very same topics, seen with a no less jaundiced eye — something Wilder was apparently fully aware of, as signaled by a virtual quote of a shot from the previous film: Dean Martin in the driving seat of a car being towed replicates Kirk Douglas in the driving seat of his own car being towed.

If Robert Osborne on TCM is to be believed, the previous C rating bestowed by the Legion of Decency prior to Kiss Me, Stupid was eight years before — which would make it Baby Doll (1956). For me that’s another case of a film being condemned principally because of its very unflattering picture of American small-town life — in this case Tennessee Williams taking some form of personal revenge on his background by honing in on the stupidity, venality, and hypocrisy of Mississippi rednecks — rather than, say, a couple of failed Nevada songwriters (Ray Walson and Cliff Osmond) and what they’re willing to do in order to sell one of their songs to Dino. The latter, I should add, is a transparent self-portrait of Dean Martin as a cynical philanderer and alcoholic who’s every bit as willing to sleep with a songwriter’s wife (Felicia Farr) as the songwriter (Walston) is willing to make him think that’s what he’s doing, at least when he hires a prostitute (Kim Novak) to impersonate her.

One reason why Avanti! (1972) continues to be my favorite Wilder picture is that, in spite of all its grace, romance, and sweetness, it refuses to hold back in its unsparing portrait of Wendell Armbruster, Jr. (Jack Lemmon) as a crass, smug, and hypocritical Republican boob, different from the small-town men in Ace in the Hole and Kiss Me, Stupid only to the degree that he’s rich with inherited money rather than poor or middle-class. Even if he eventually gets softened and loosened some by Pamela Piggott (Juliet Mills) — Wilder’s women are almost invariably smarter than his men — Avanti! leaves us with little doubt that he’s still mainly an uptight and clueless prig at the end. And the small-town creeps of Ace in the Hole and Kiss Me, Stupid are never truly redeemed either; Walston saves his own marriage only by becoming willingly complicitous in retaining his own ignorance. Having spent the first 16 years of my life in a small town, I find that there’s something about the desperation of these men that cuts to the bone. [8/10/08]