This appeared, in a somewhat different form, in the April 14, 2000 issue of the Chicago Reader. –J.R. 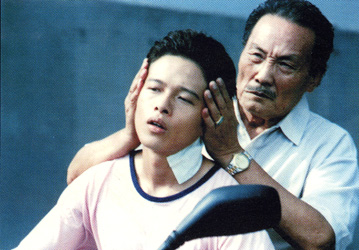 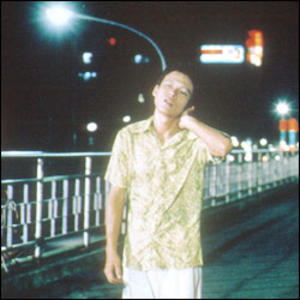 1. I wouldn’t know how to plunge headlong into a single approach towards a film as strange and as shocking as The River — Tsai Ming-liang’s third feature, playing this week at Facets Multimedia — so a series of alternative perspectives seems desirable. The problem is, even starting off by labeling this movie a masterpiece reminds me how such an assertion in some cases amounts to a gamble more than a certainty, however much one may prefer to pretend otherwise.

What’s my alibi for this lack of confidence? First of all, a sense that when one encounters something as downright peculiar as The River, the first impulse is not to assert anything at all but to ask, “What the hell is this?” And to pretend to answer such a question, one ultimately has to fall back on one’s experience before even attempting an analysis.

In my case, I’ve experienced The River twice, both times in less than ideal circumstances: with German subtitles at the Vienna Film Festival two and a half years ago, and, just before writing this, a copy of an English commercial video, with English subtitles, that a friend was kind enough to make for me when I discovered that there wasn’t any other way I could see this film again before reviewing it. Paradoxically, it was the latter experience that was more problematic — if only because the image in all of Tsai’s features is immensely more important than the dialogue, which is minimal, and because the size and clarity of the image are both essential to what Tsai is doing. Critic Kent Jones, the friend who made me the dub, aptly wrote about the film’s formidable “monumentality” in the French magazine Trafic a couple of years ago, and the only reason why I know he’s right is my memory of seeing the film in 35-millimeter in Vienna. Seeing it on video less than an hour ago, while it reminds me of all sorts of other details, can only confuse and dilute that first impression.

The fact that I regard The River as a probable masterpiece doesn’t mean that I consider it fun or pleasant; terrifying and beautiful would be more appropriate adjectives. It’s been a subject of dispute ever since it won the Special Jury Prize in Berlin in 1997, and I can’t exactly quarrel with those who complain that it’s sick and/or boring since these are both possible and perhaps legitimate responses that I don’t happen to share. But that it’s also the achieved work of a master I have little doubt.

2. Tsai — a Taiwanese director born in Malaysia in 1957 who started out in TV dramas (1989-91), and has made one TV documentary, about AIDS (My New Friends, 1995), has made four features to date — Rebels of the Neon God (1992), Vive l’amour (1994), The River (1996), and The Hole (1998). All of these features are set in Tapei and deal with loneliness and isolation; the latter, a postmodernist musical of sorts, has also been seen on U.S. cable and elsewhere in a shorter version called Last Dance. The River, in some ways the most powerful and accomplished of the last three features (I still haven’t seen the first), is the one that has been seen the least, probably everywhere, because people don’t quite know what to make of it.

3. The plot — what there is of it — begins with a young woman (Chen Shiang-chyi) who’s working on a film crew and runs into an old friend, Hsiao-kang (Lee Kang-sheng), whom she hasn’t seen in a couple of years, going in the opposite direction on an escalator in a mall. She invites him to join her, and they ride on his motorbike to the film shoot, where Hong Kong director Ann Hui, playing herself, is trying to get a fake corpse to float convincingly on the polluted Tanshui River. Complaining that the dummy’s feet look fake, Hui asks Hsiao-kang during a lunch break if he’d like to play the corpse, and after some hesitation he agrees. Later his friend takes him to a small hotel to clean up, and they have sex; this is the last we see of her in the film. We also start following the separate daily activities of Hsiao-kang’s parents, who live with him, though they’re almost never seen together. His mother (Lu Hsiao-ling), an elevator operator, is pursuing a fairly apathetic affair with a man who sells pornographic videos, and his father (Miao Tien), apparently retired, cruises gay saunas in search of anonymous sex. Around the same time that the son starts complaining of a chronic and debilitating pain in his neck, clearly brought on by an infection he got from the river, his father starts noticing a water leak in his bedroom that’s gradually becoming more serious; rather than deal with this problem directly, he uses plastic sheeting to form a canopy over his bed and divert the water toward a drain. Meanwhile the father and mother alternately try to find cures for the son’s infection, taking him to different doctors who try out various therapies, none of which appears to work. The leak in the father’s bedroom begins to flood the apartment, prompting the mother to climb through a downpour to the empty apartment above to turn off the kitchen faucet. Meanwhile the son is masturbated in one of the dark saunas by an older man, who turns out to be his father. As soon as the father recognizes his son, he slaps him. Father and son sleep in the same bed in a hotel room in a Taipei suburb. In the morning the father, pretending nothing has happened, phones a religious leader, who advises him to return to Taipei with his son and see a doctor, saying they no longer have to visit his temple. The father goes downstairs for breakfast, and Hsiao-kang, before joining him, steps out onto the sunny balcony. 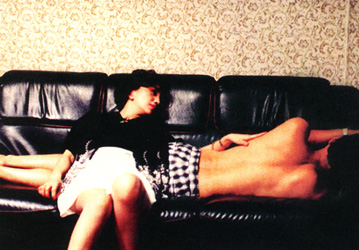 4. Stylistically, Tsai favors filming most action in medium shot or long shot, in extended takes, with the camera typically planted in the center of a room — a fairly cool and detached way of dealing with the sadness and isolation of his characters, whether they’re alone or not. (No one ever seems to get much enjoyment out of sex or any other kind of social interaction in a Tsai Ming-Liang movie.) Most of the settings occupied by these characters are new and relatively anonymous; when the father gets cruised by a young gay hustler in an extraordinarily and beautifully developed long take early in the film, before they proceed to a sauna, it’s at a McDonald’s.

Ever since I first encountered Tsai’s work in Vive l’amour, I’ve tended to regard it as a kind of update on the urban melancholia Michelangelo Antonioni used to specialize in, especially during the 50s and 60s — a reference point that can only take one so far, as it does with another Taiwanese modernist, Edward Yang. One of the main differences may be that Antonioni is a master of alienated moods, but atmosphere tends to be more a given than a creation in Tsai’s movies, which conjure up more mysteries in relation to what the characters tend to be inarticulate and confused about — sexuality most of all.

5. An obsessive filmmaker, Tsai uses the same lead actor playing virtually the same character in all four of his features to date, and the same actors playing his mother and father in Rebels of the Neon God and The River; he also uses Chen Chao-jung in central roles in Rebels of the Neon God and Vive l’amour and in a more minor role (as the gay hustler at McDonald’s) in The River, and Yang Kwei-mei as the female leads in Vive l’amour and The Hole and in a bit part in The River. If one adds to this an ongoing obsession with water as a symbol for sexual desire — which crops up no less centrally in The Hole — one might say that Tsai has every bit as fixed and narrow a cosmology as Leos Carax. The parallels between the father’s sexual desire and the leak in his bedroom, developed concurrently, are as much a part of this system as the fact that water, seen as a life-force, is also the cause of the hero’s nearly constant pain — which persists even in the final shot, and is one of the factors that makes the film so unsettling to watch. Furthermore, the urban alienation that seeps into virtually every shot also affects this film’s narrative structure, so that at least half an hour passes before it’s clear that the son and his two parents are even related, either to him or to each other. (The same principle makes it seem both logical and inevitable when the friend on the film crew whom Hsiao Kang has sex with simply drops out of the film after that.) Furthermore, as Bérénice Reynaud notes in her excellent recent book Nouvelles Chines Nouveaux cinémas, the first time that the son crashes on his motorbike offscreen due to his neck injury and the father, standing nearby, goes to help him, Tsai ambiguously shows the two characters on the street as if they were absolute strangers — making their accidental sexual encounter much later seem a lot more plausible. Tsai’s poker-faced distance from his characters may make one think of Buster Keaton or Jacques Tati, as Kent Jones suggests, but it’s worth adding that the occasional comic inflections may not always be intentional. In one interview, Tsai mentions that when the father rides behind his son on the motorbike en route to the hospital, holding his head in his hands, this is based on a personal experience Tsai had when Li hurt his neck during the shooting of Rebels of the Neon God: “I thought the image had a lot of pathos,” he adds, “but to my surprise everyone seems to find it funny.” Squaring Tsai’s acute grasp of the contemporary with a particular intentionality may ultimately be besides the point, especially for work that is coded and inflected in so personal a manner. Like a certain form of geometry — or would it be physics, tied to engineering? — the characters and their repressions and longings are so palpably realized that all sorts of improbabilities can intervene without causing a dent. Sex and plumbing, seduction and infection, a spray of steam and a torrent of rain are all factored into the same inexorable flow. 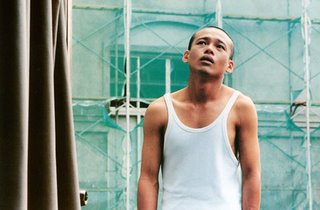