Whenever it happens, something starts to click, and the movie becomes mythical — mutates into a sort of classic before one’s eyes. This isn’t to say that it can thenceforth do no wrong; the flashback shots that punctuate the final credits are lamentable, a cheap attempt to add uplift to an ending that doesn’t need it. But the movie does take on a certain charmed existence, persuading one to forgive such lapses. After a rather slow beginning, this prosy film turns poetic; and when that happens, we’re no longer passive bystanders but active participants, along for the ride morally as well as physically.

It’s questionable how much of the credit for this belongs to director Ridley Scott, whose production company made this movie. So far Scott has turned out one eye-popping cult movie, Blade Runner, which was substantially altered from his own cut, and several more or less forgettable features: two respectable genre exercises (Alien and Someone to Watch Over Me), a so-so literary adaptation (The Duellists), a fluffy department-store Christmas window display (Legend), and an offensive anti-Japanese thriller (Black Rain). He’s not exactly an auteur — this former director of commercials brings a stylish sense of lighting, framing, and monumentality to a variety of visual subjects, but he needs a good script as badly as a musician needs an instrument. He seems to have lucked out this time. Callie Khouri’s screenplay (her feature debut) and the performances of Davis and Sarandon provide him with both an engine and a body; he provides the snazzy paint job. In other words, without the stellar work of these three women, he’d be lost.

Here’s the little I know about Khouri: she hails from San Antonio, grew up in a log cabin in rural Kentucky, studied drama and acting at Purdue, and worked as a waitress while acting in stage productions in Nashville. Then she moved to Los Angeles, where she studied acting some more and worked her way up from receptionist at a commercial and music-video production house to a producer of music videos for Alice Cooper, Robert Cray, and Winger.

What this suggests to me is that Khouri knows something about the backgrounds of her heroines, who decide to take off on a two-day holiday in Louise’s T-bird convertible but before long wind up as fugitives from justice. Khouri knows how to write something juicy without too much showing off. The few fancy lines — “You could park a car in the shadow of his ass,” for example, or “I’ve always believed that if done properly, robbery doesn’t have to be an unpleasant experience” — are fully justified by the context. Equally important, she has an acute and very funny sense of the habits and attitudes of rustic males — car dealers, cops, truckers, musicians, and everyday sexist philanderers.

Of the lead performers, Davis is the revelation — not because she hasn’t been good before, but because her opportunities in Fletch, The Fly, The Accidental Tourist, Beetlejuice, Earth Girls Are Easy, and Quick Change haven’t allowed her to dig as deeply into a character. (Sarandon, by contrast, has already shown how she can stretch, in Atlantic City and Bull Durham as well as the recent White Palace, where she plays a waitress rather like Louise.) Davis’s Thelma, a sequestered Arkansas housewife just beginning to figure out what she’s been denied, is a full-bodied creation, thought through and dreamed up from the inside out. In contrast to Demi Moore and Glenne Headly’s able impersonations of New Jersey hairdressers in Mortal Thoughts, Davis offers not a clever sketch but a fully articulated painting — perhaps because the script she’s working with is packed with canny clues and surprises. (One of the ripest clues is Thelma’s purchase on the road of a carton full of miniature bottles of Wild Turkey — she’s someone accustomed to cutting loose only in small doses, so naturally this is how she sets about tasting her freedom.) Seeing her sidle up to a state trooper’s window with a smile and a gun, in that order, one witnesses one of those rare performances that convert doing into being. 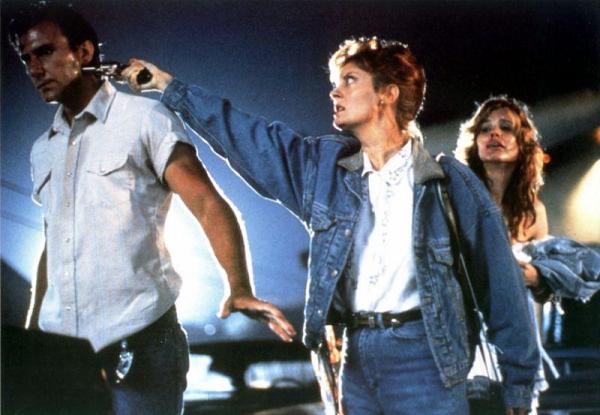 Louise is considerably more world-weary — and somewhat less spelled out as a character. The script indicates that something traumatic happened to her in Texas, but she’s never willing to talk about it. We suspect that she was raped, but Khouri’s pointed refusal to settle the question is one of this screenwriter’s smartest moves. For one thing, Sarandon has an agreeable way of suggesting a whole character without laboring over specifics. And one way Khouri persuades us to feel committed to these characters is by not taking the lazy, conventional, and reductive route of “explaining” what makes them tick — she leaves us with some life-size blanks to fill in.

“Crime as self-realization” and “crime as freedom” are central American myths, and road movies often hark back to both of them. It’s clear that works as disparate as Huckleberry Finn, Easy Rider, Bonnie and Clyde, and Housekeeping (the novel and the film) have certain things in common, and that Thelma and Louise taps into some of the same sources of energy. In all these stories the interdependence of the partners in crime is a fundamental part of their appeal; Huck learns as much from Jim as Clyde learns from Bonnie and as Ruth learns from Sylvie. The mutual education that goes on between Thelma and Louise is equally important.

Part of the way this movie accumulates momentum is by gradually revealing that even before its two heroines leave home, they’re already criminals of a sort — their best instincts are often categorized as common-law criminal impulses by their male-dominated world. (Thelma’s even given a hard time by her husband for raising her voice.) Becoming criminals before the law is therefore a process of self-definition and self-realization made possible by their adventures and their influence on each other.

Once the film firmly establishes this process, it can gain some of its best poetic effects by suspending the plot without retarding the action — an effect also achieved by all the “road” works cited above. By this time, character has become action. Thelma & Louise can allow itself several short, magical, but apparently pointless detours that don’t slow down the pace or dissipate our involvement: a camera movement traverses the T-bird in motion, Scott taking full advantage of both the ‘Scope framing and his own capacity to fill it handsomely and dynamically; in a hilarious shot, Thelma’s husband Darryl and several policemen watch a Cary Grant movie on TV; one lovely sequence is devoted to a quiet rest stop in a prairie at night.

By the time Thelma and Louise and a hoard of police cars converge at the edge of an enormous canyon, both the heroines and the world they’re fleeing have been so fully defined that Scott can depict this showdown on the same monumental scale he brought to the opening of Blade Runner without seeming unduly hyperbolic. (At this point, for all the thematic differences between the two films, their visual parallels border on the uncanny.) But the achievement of this outsize finale would have been unthinkable without the careful and sensitive groundwork laid by Khouri, Sarandon, and Davis — including their recognition that Thelma and Louise, empowered by one another, become existential outlaws in the fullest sense simply by deciding to accept and embrace who they already are.