The Scandals of AMORE 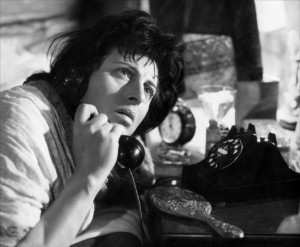 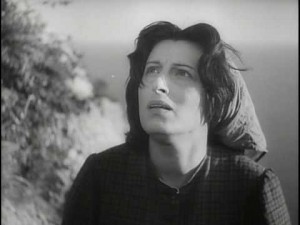 L’amore: Due storie d’amore (Love: Two Love Stories, 1947-1948), as it was originally known, is the first feature of Roberto Rossellini to have been completed after his celebrated war trilogy of Rome Open City (1945), Paisà (1946), and Germany Year Zero (1947), although in fact its first episode, A Human Voice (a one-act play by Jean Cocteau), was shot just before Germany Year Zero, and its second, The Miracle, was shot afterwards.  A sort of two-part concerto-showcase for Anna Magnani, designed as a single feature, it was originally released outside in Italy only in truncated form due to a failure to clear the rights for the Cocteau play. Gavin Lambert noted in his review of the second film for Monthly Film Bulletin in 1950, ‘Although The Miracle is strong enough to stand on its own, and can fairly be judged as a film in itself, the fact that it is now shown partially out of context has meant some shifting of emphasis: it appears as an isolated tour de force, whereas if it had followed La Voix Humaine, the dedicatory tribute would have been reinforced, the spotlight focused even more sharply on Magnani.’ Seeing the two films together on this release finally provides us with an opportunity to regard them together as interactive parts of a single work.

Amore inaugurates a busy if unruly stretch in Rossellini’s work marked by experimentation, independence, wanderlust, a great deal of controversy and scandal, and a shift in leading ladies from Anna Magnani to Ingrid Bergman — a rich, multifaceted period encompassing The Machine That Kills Wicked People (a fantasy-comedy delving into the metaphysical mysteries of photography, 1948), Stromboli (1949), The Flowers of St. Francis (1950), a sketch devoted to Envy in Seven Deadly Sins (1951), Europa ’51 (1952), Where is Liberty? (1952), other sketches in two other portmanteau features (1952 and 1953), Voyage in Italy (1953), Joan of Arc at the Stake (1954), Fear (1954), and an ambitious series of films devoted to India (1957-1959).

In the mid-1950s, Rossellini published a detailed account of most of this era in Cahiers du Cinéma, titling the section devoted to Amore “I Chose Sincerity”. It begins as follows:
I have already said that I believe cinema is a new art and has
the potential for making many discoveries. It is that potential
which makes being a film director intoxicating. It was in that
spirit that I made A Human Voice from the play by Jean
Cocteau.

The cinema is also a microscope in that it can take us by the
hand and lead us to the discovery of things the eye alone could
never perceive (be it close-up, small details, and so on.) More
than other subjects A Human Voice offered me the chance to use
the microscopic camera. The phenomenon to be examined was
Anna Magnani. Only the novel, poetry, and the cinema permit us
to rummage through a personality to discover reactions and
motives for actions.

This experience, pushed to an extreme in A Human Voice, was
useful to me later in all my films, since at one moment or another
in shooting I feel the need to cast the scenario to one side in order
to follow a character in his most secret thoughts, those which are
perhaps not even conscious. It is also this “microscopic aspect” of
cinema which made neorealism; it is a moral approach which
becomes an aesthetic fact.

When I had finished A Human Voice I found myself with a film
forty minutes long. As we are the salves of commercial programing,
it was practically unsalable.  I therefore had to look for another
story of about the same length. Federico Fellini, who often worked
with me, wrote a story which I filmed under the title The Miracle.
According to Fellini, it was taken from a Russian short story but he
claimed he had forgotten both the author and the original title. When
he saw that I was much taken with the story but that I was searching
desperately for the original text so that I could make legal arrangements
for the rights, he confessed that he had invented the story down to the
smallest details. He had lied at first because he was afraid that I would
find the story ridiculous.

After a time, both stories were released under the title Amore. The
Italian critics said that A Human Voice was not cinema. It was certainly
the only time I have ever seen critics affirm anything so unanimously. […] 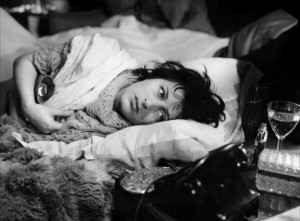 One unfortunate blind spot (or, more precisely, deaf spot) in this account is its reliance throughout on visual terminology and metaphor (‘microscope’). Despite Rossellini’s cross-referencing of cinema with the novel and poetry, which depend    on words and sounds, he manages to leap-frog over the central fact that A Human Voice isn’t only a sound film but a direct sound film — not only the first employment of direct sound by Rossellini,  but possibly even its first employment    in Italian cinema, which depends almost exclusively on post-dubbing silent footage. Consequently, it seems possible that the judgment of Italian critics that the film  “was not cinema” stemmed as much from its innovative direct sound as it did from Rossellini’s confining the action exclusively to a bedroom and adjoining bathroom.   The radical filmmaker Jean-Marie Straub, for whom direct sound is a cornerstone in his own work, has even marveled at the fact that he can hear the movement of the camera dolly on the soundtrack. (We can also see a dangling microphone at one  juncture.) Rossellini expert Adriano Aprà has also suggested that the live sound captures our sense of the world outside the bedroom — a song on the radio, a crying child, footsteps, a door closing — and thus provides a dialectic with the claustrophobic space. 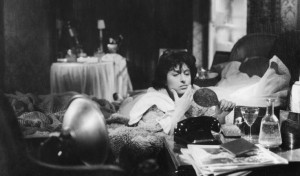 But this is only one of the three scandals that greeted Amore. The other two        were the religious scandal provoked by The Miracle, particularly in the U.S.   (where attempts to ban the film led to a Supreme Court decision in its favour),       and the implicit scandal posed by the excruciating, abject suffering of the leading characters played by Magnani in both episodes and what they might suggest about Rossellini’s attitude towards his heroine in each case — a city woman being abandoned by her offscreen lover in the first, a goatherd in the second who becomes impregnated by a silent traveling shepherd (played by Fellini) whom she’s convinced is a reincarnation of St. Joseph, and who winds up ridiculed by her village neighbours, finally giving birth to a son, in isolation but triumphantly, in the countryside. In the first episode, Rossellini’s camera is made to seem intrusively voyeuristic: “In 25 shots,” Cocteau himself noted, “he filmed cruelly a documentary of a woman’s suffering. Anna Magnani displays her soul, a face without make-up.” But in the second episode, it might be argued that the camera is more complicitous and sympathetic. Significantly, the name assigned to the goatherd, Nannina, echoes the affectionate nicknames assigned to Magnani by the Italian public, Nannarella and La Nanna, further suggesting that Rossellini admires her untrammeled faith in spite of her naïve delusions. 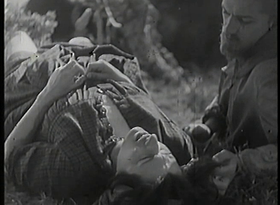 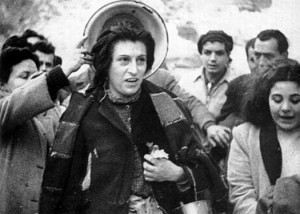 It’s also worth recalling that Cocteau’s original one-act play, before it went on to become the most performed of all his works, created a scandal at its own Paris preview in 1930 at the Comédie Française, as described by Cocteau biographer Francis Steegmuller. This was fueled by antagonism towards Cocteau as a gay arriviste and consisted of an uproar of insults from members of the audience, including Surrealist poet Paul Éluard (who had come as the guest of Sergei Eisenstein, and was eventually ejected from the theater).

The most striking example of continuity between the two episodes can be felt in the silence of Fellini’s shepherd, even while plying Nannita with wine to seduce her, thus making the opening sequence another delirious, nonstop Magnani soliloquy. By contrast, the closing sequence, in which her isolated and abandoned character gives birth to a son, is almost entirely devoid of speech, making her final utterance closer to triumphant than abject. This brings up the religious scandal of The Miracle,  eloquently explicated by Jacques Rivette in 1955 in his celebrated ‘Letter on Rossellini,‘ in which he noted that Rossellini ‘is not merely Christian, but Catholic; in other words, carnal to the point of scandal; one recalls the outrage over The Miracle; but Catholicism is by vocation a scandalous religion; the fact that our body, like Christ’s, also plays its part in the divine mystery is something hardly to everyone’s taste, and in this creed which makes the presence of flesh one of its dogmas, there is a concrete meaning, weighty, almost sensual, to flesh and matter that is highly repugnant to chaste spirits: their “intellectual evolution” no longer permits them to participate in mysteries as gross as this.’  Rivette’s run-on monologue, like much of Amore itself, isn’t so much a declaration of passion over principle as an expression of passion as principle.