Written for a feature in the August 2018 Sight and Sound about novels set in and around the world of movies. — J.R. 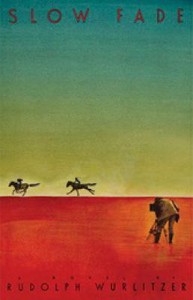 The fourth novel (1984) of Rudy Wurlizer, a remarkable writer better known for his screenplays (including those for Two-Lane Blacktop and Walker, both recently canonized by Criterion), is the only one about movies, but it views salvation as a distinctly precinematic or postcinematic postulate. Following his psychedelic Nog (1969), minimalist Flats (1971), and apocalyptic Quake (1974), Slow Fade is more of a page-turner — as is The Drop Edge of Yonder (2008), a Western that grew out of an unrealized script. It focuses on a wasted septuagenarian macho filmmaker named Travis Hardin contemplating his own demise. Many assume it’s a portrait of Sam Peckinpah, whom Wurlitzer worked with on Pat Garrett and Billy the Kid, though he also suggests John Huston and Nicholas Ray. And the surrounding dead-beat hustlers, all hoping to turn some aspect of his legend into coin, include his alienated son and a roadie whom Hardin hires to write a script recounting what happened to his equally alienated daughter when she ran off to India on a spiritual quest. The script’s progress is intercut with the director’s drift back to his modest origins, combining the Beckett-like/Buddhist theme of identity loss from Wurlitzer’s earlier novels with a road-movie ambience. (Jonathan Rosenbaum)