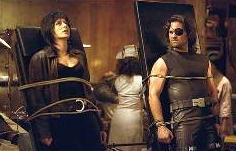 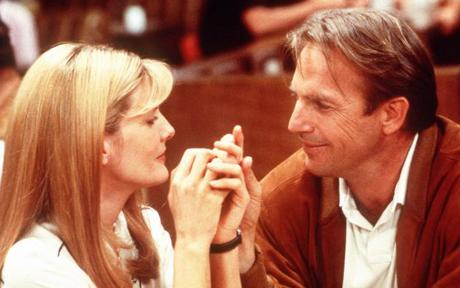 There’s hardly anything that’s beautiful or imaginative or different about Tin Cup, or anything nearly as good as you’ll find in Ron Shelton’s better sports comedies like Bull Durham and White Men Can’t Jump. What there is, basically, is the fun of a few bankable givens: Kevin Costner offering a few low-key riffs on his post-Jimmy Stewart brand of everyman crankiness as a golf pro stranded in a west Texas dump, Rene Russo vamping through a clunky transition from kooky small-town therapist to committed golf groupie, and Cheech Marin and Don Johnson providing well-honed comic support (Johnson in the fashion-plate Gig Young part). And there’s the usual hyperbolic sports climax, in which the ornery pro (unlike Shelton, Costner & Company) opts for perfectionism rather than big bucks and a career. You’ve seen it all before — including the crude degeneration of Marin’s character into Latin lover — which makes this movie a godsend to publicists and other blurb writers; it sinks into its appointed slots with all the comfort of a hippopotamus settling down for an extended soak in a muddy river. 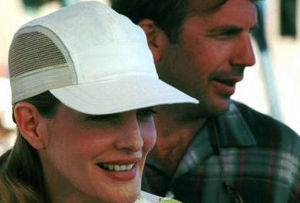 I can think of only one bit of Tin Cup that’s beautiful, imaginative, and different, and it lasts for only a few seconds: a speech delivered by Russo, before her character is transformed into the standard-issue cheerleader, is broken into fragments by jump cuts. The character’s hesitations and confusions — or are they those of the actress? — are formalized by the cuts into a kind of patchwork quilt, conveying a fresh authenticity. On the other hand, breaking down the golf trajectories into separate shots during the sports climax comes across as an expedient form of cheating — the very opposite of authenticity. This is where the movie seemingly hits box-office pay dirt. But if the glory and continuity of what Costner is supposedly achieving can only be conveyed by a measly film trick, how meaningful is it in the first place? Just glorious and continuous enough to kill a couple of hours.

By contrast Foxfire and Escape From L.A. honor their genres and feed their blurb writers only out of duty, and the effort shows. Foxfire assumes that a commercial movie about rebellious teenagers requires a certain amount of abrasive behavior and language, even if the teenagers are girls and the real interest of the filmmakers — Annette Haywood-Carter directing her first feature, Elizabeth White adapting a Joyce Carol Oates novel, five interesting but basically unknown actresses, and art director Alan Locke — appears to be elsewhere. John Carpenter’s Escape From L.A. harks back to its 1981 prequel, Escape From New York, updated by the commercial gospel according to Schwarzenegger: assuming that pithy, bubblegum one-liners are what audiences expect to hear from macho desperado Snake Plissken (Kurt Russell), this film furnishes one or two per action sequence, honoring the contract even though Russell often makes the lines sound flat and obligatory.

Fortunately, what these movies genuinely have to offer has little to do with the ridiculous requirements of film promotion. But these are the requirements most of the blurbmeisters in the all-but-interchangeable critical and promotional offices of the mainstream must address; artistic virtues won’t wash. And given “critics” who peg as “liberal” and “thoughtful” the celebration of vigilante justice in A Time to Kill and the glossing over of a massive slaughter of innocent women and children in Courage Under Fire, political and social stances can’t be said to matter very much either. Yet it wouldn’t help Foxfire at the box office to argue that it posits the same dream of community forged around a cantankerous, charismatic outsider as Tin Cup does — any more than it would to point out that Escape From L.A. honors in a less compromised way the same libertarian, antiauthoritarian impulses behind the other two pictures. As long as these qualities can’t be translated into ad copy, these films are unlikely to find their ideal audiences during their initial runs. 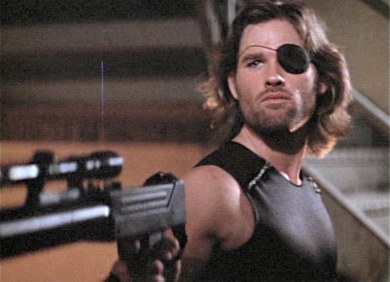 How, for instance, can you reasonably recommend Escape From L.A. by saying that it’s the most visually pleasurable movie Carpenter has made to date? The copywriters might have made something out of the fact that the production designer is Lawrence G. Paull, best known for his work on Blade Runner – until you stop to consider that Blade Runner flopped commercially when it came out in 1982, and runs in perpetuity as a midnight classic today only because its sheer beauty eventually seeped into the public consciousness without the interference of blurb writers. Indeed, from the neat green-against-black design of the credits to Snake’s terse one-liner at the end (the only one-liner in the movie that really works), Carpenter’s visual and conceptual minimalism has rarely functioned as cleanly as it does in Escape From L.A. This is a minimalism that can paradoxically accommodate a ‘Scope format and most of Los Angeles and environs (including Disneyland, reconfigured in postapocalyptic terms) as it decorously fills the frame. Miniatures are employed like glittering toys in a treasure chest, and the inventive menagerie of “surgical failures” and disastrous Hollywood face-lifts by the Surgeon General of Los Angeles (Bruce Campbell) thoroughly outclasses the one in the much pricier Island of Dr. Moreau.

Even the tattier visual effects of Escape From L.A. are attractively designed and composed: earthquake tremors recur periodically like reliable vaudeville routines, Snake surfing a tidal wave through a downtown dystopia plays better than it sounds, and the blast of a “fun gun” followed by intercut spurts of black-and-white footage offers visual and rhythmic pleasures miles beyond the usual MTV hiccups. True, some of the conceits are goofy, though the movie luxuriates in hyperbole: electrocution is offered to criminals as an alternative to being banished to LA, now separated from the Pacific coast; and Snake is forced to play a one-man basketball game to save his skin and leads an aerial attack with old-fashioned flying machines. Some of the characters come right out of comic books: the president’s dopey daughter Utopia (played by A.J. Langer in hot pants), hitched to a Latino would-be revolutionary, and Steve Buscemi as “Map to the Stars Eddie,” decked out like a Guys and Dolls geek. But this is a poetic pulp movie made with joy, and if you overlook the flat, familiar commercial concessions, much of that unbankable emotion can be shared. 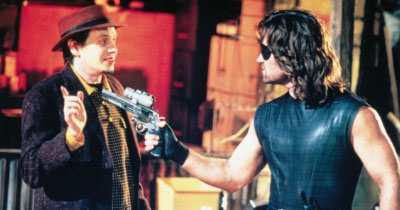 The blurb writers for Foxfire have come up with two basic formulas, both of which are fair enough as advertising copy goes. One — “It took them 17 years to learn the rules and one week to break them all” — is featured in the ads, while the other serves as caption for the publicity stills: “an edgy new film about young women today; growing up, finding their independence, and making a difference.” But what impressed me most about the film, enough to make me scribble the words in my notebook, were its “mottled, intricate lighting patterns.” Not the sort of thing that sells tickets, I’m afraid, but it had a great deal to do with what entranced me.

The montage sequence behind the opening credits, deceptive stylistically in its frenetic pacing, is nevertheless appropriate thematically. A fully clothed Maddy (Hedy Burress), who turns out to be the narrator and central character, is snapping photographs of her bare-assed boyfriend Ethan (Peter Facinelli) in the woods. This simple inversion of the usual movie objectification of women carries over into a marginalizing, two-dimensional treatment of men throughout the movie: a teacher who paws the girls in his class, an intolerant principal, an uncomprehending father, and cops and security guards are all depicted in the foreshortened, stereotyped manner usually accorded females in movies about rebellious boys. In other words they’re stock figures rather than characters; even Ethan, who’s relatively sensitive, could be fairly described as a sensitive piece of meat.

What justifies this stylization isn’t a tit-for-tat settling of feminist scores but the dreamy adolescent subjectivity that informs the entire movie, including the mottled lighting. Since the film is about the bonding of teenage girls, I suppose it has something to do with feminist empowerment, but Foxfire is a lot closer to a lyrical poem than a tract: it’s much too far inside its subject to come across as preachy. As in much of Joyce Carol Oates’s fiction — or so I’ve been told by a friend — the action is organized around the appearance of a mysterious stranger. Usually this stranger is male, as in the Oates story “Where Are You Going, Where Have You Been?,” the basis for the movie Smooth Talk. But in this case the stranger is a teenage female drifter named Legs, memorably played by Angelina Jolie (Jon Voight’s daughter), who is the catalyst for Maddy and three of her classmates to become friends and fellow rebels.

The fact that Legs is initially mistaken for a boy by a (male) security guard when she wanders into a high school to get out of the rain — thereby setting the plot in motion — is probably the closest the movie gets to a comment on gender roles. Most of the time it’s steeped so completely in the atmospherics of its self-enclosed world that such issues seem like distant thunder, and in this dreamy world Haywood-Carter’s enchanted lighting schemes and magical mise en scene come fully into their own. In one nocturnal interior shot, Legs is lit by a blue light while the other girls drift around her like moths; in another indelible interlocking configuration, the five heroines gather around a sink in the school bathroom; and Maddy’s dark bedroom twinkles with as many mysterious pinpoints of light as a planetarium.

I haven’t said much about Foxfire’s plot, portions of which are fairly sluggish, but I’m not convinced that the story matters nearly as much as the distilled visual and behavioral poetry that derives from it, none of which is hinted at in the blurbs quoted above. If there is a commercial hook for the film’s atmospherics, I suppose it’s the fact that Paige Simpson and Mike Figgis, respectively executive producer and director of Leaving Las Vegas, also produced this movie. But Leaving Las Vegas, however atmospheric in its own right, is a weepy male fantasy reeking of self-pity, and even though it made tons of money I’d hate to see Foxfire promoted through such a connection. What it has that Leaving Las Vegas lacks is poetry; too bad the ads won’t say so. 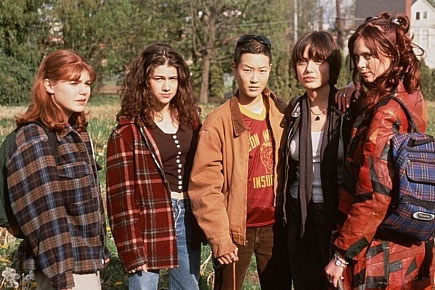