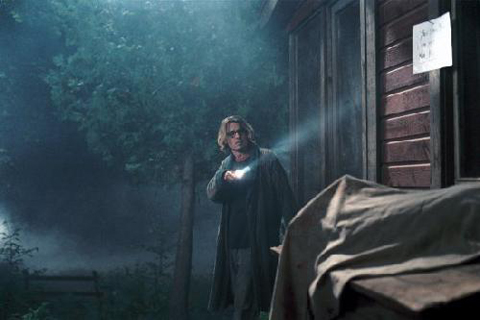 Directed and written by David Koepp

I’ve seen four movie adaptations of Stephen King books that have writers as heroes — The Shining (1980), Misery (1990), The Dark Half (1993), and now Secret Window – and I know of a few others. This isn’t necessarily self-indulgent on King’s part. An author this prolific would eventually run out of material if he didn’t use his own experience as a writer, and besides I happen to prefer the plotlines of The Shining and Misery to those of other King stories I know. He understands what it means to be a writer driven crazy by his own demons (in The Shining) as well as by some version of his public (in Misery), and even though he makes the heroes in both cases fairly dislikable, we wind up ensnarled in their dilemmas anyway. He also seems to have an astute take on writer’s block, suggesting that writing too much and repeating oneself can be as much a form of creative blockage as writing too little.

Secret Window, which addresses this paradox more directly than The Shining, comes from a novella called Secret Window, Secret Garden. The plot certainly has possibilities, but far too many of them are botched by writer-director David Koepp, who’s a better writer than director. As a writer he’s been associated with everything from Apartment Zero to Death Becomes Her to Panic Room to Spider-Man and with directors such as Brian De Palma (Mission: Impossible, Carlito’s Way, Snake Eyes) and Steven Spielberg (Jurassic Park). But as a director he’s much less experienced, and it shows.

Admittedly, he does fine with a few pure movie effects. A very fancy shot behind the credits skims across a lake and then cranes up the side of an isolated A-frame house before climbing through an upstairs window to catch the mirror reflection of the writer-hero, Mort Rainey (Johnny Depp), asleep on a sofa downstairs. Much later the camera follows a chilling earthquake-like fissure as it runs up a wall of the same house, across the ceiling, and down the opposite wall. And when it comes to expressing everyday anxiety, Koepp has the benefit of yet another score by Philip Glass (who’s fast becoming the Stephen King of movie composers); it provides a metronomic pulse that encourages not thought but the impression that one is thinking (in my recent review of Errol Morris’s The Fog of War I noted that its Glass score had the same effect). Like Morris, Koepp flashes a bit of text on-screen that we don’t have time to read and aren’t supposed to, and the score immediately conveys an anxious muddle. But when it comes to setting up and sustaining suspense, which requires careful pacing and editing, Koepp is a bit of a duffer and not even Glass can rescue him.

Part of what makes the movie version of The Shining more compelling, if less scary, than the novel is that it addresses the isolation artists need to create — or try to create, which requires at least as much energy — and the horror of running dry. How they’re addressed may tell us as much about director Stanley Kubrick as it does about King. I have no idea whether Secret Window tells us anything about Koepp, but one thing that divides the movie against itself is that it appears to be telling two separate stories, which later turn out to be the same story. This may seem clever afterward, but it makes for a distracting and confusing ride. 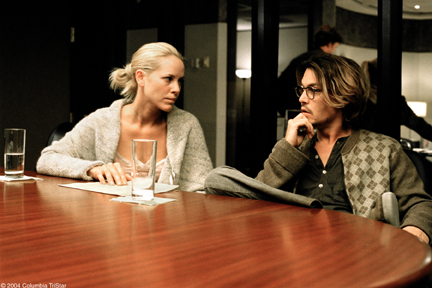 The first, not very dramatic story concerns Rainey, a popular author in the midst of a messy divorce precipitated by his wife (Maria Bello) cheating on him. He also has writer’s block and spends much of his time sleeping and trying not to smoke. In the second, much more dramatic story Rainey is harassed by a crazy hick writer from Mississippi named John Shooter (John Turturro), who claims Rainey plagiarized one of his unpublished stories and botched the ending. Rainey, who published his story in Ellery Queen’s Mystery Magazine before Shooter says he wrote his, wants to prove his innocence by retrieving his copy of the magazine from the suburban house he shared with his wife, but before he can, Shooter murders his dog. Rainey hires a detective (Charles S. Dutton) and speaks to a local sheriff (Len Cariou). And then things get even nastier. (People who don’t want to know how it ends should check out now.)

As written and as played by Turturro, Shooter is a preposterous character, unconvincing on just about every level, from his fake southern accent to his Amish hat. But this flaw in the second story retroactively becomes a virtue in the first — because Shooter turns out to be a figment of Rainey’s tortured imagination, existing to meet only his psychic needs and not anyone’s notions of credibility. Maybe this creation suggests that Rainey isn’t as blocked as he thinks, but the flimsiness of the character implies the kind of creative impediment alluded to earlier — that of a pulp writer who’s written too much and whose imagination is exhausted. There are also gaps in the exposition, such as a reference to an earlier plagiarism incident, that are only belatedly given minimal justification.

The denouement is spelled out using effective morphing tricks in which Depp converses with Depp before being equated with Turturro, but by this time Koepp has violated his own principle of sticking to Rainey’s viewpoint by showing us his wife and her lover (Timothy Hutton) when he isn’t present — betraying the solipsistic story structure before it’s been explained. The otherwise fairly consistent story logic isn’t much fun until we arrive at the payoff. But by this point we’ve lost most of our interest in the story, and not even Depp’s dexterity in portraying Rainey’s neurotic habits can persuade us to care. 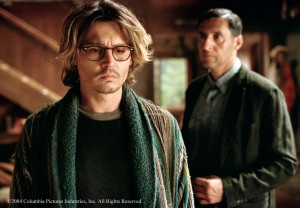