Lost in the Shuffle [THE DEEP END OF THE OCEAN] 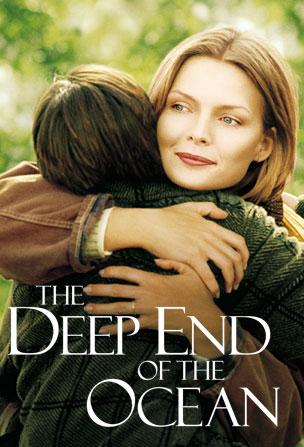 The Deep End of the Ocean

The two best reasons for seeing The Deep End of the Ocean are the story and Michelle Pfeiffer, not necessarily in that order. But these two calling cards are sometimes at odds, so the film’s virtues and problems grow out of the same source. On the one hand, you’ve got the star system creating certain expectations about the story’s focus; on the other, you’ve got a narrative about a 12-year-old boy trying to figure out his identity by reconciling two sets of parents. Because these two factors are at cross-purposes, you start out watching a star vehicle and wind up watching a coming-of-age story; the transition from one to the other is what makes The Deep End of the Ocean feel somewhat uncertain.

Certainly one can rationalize this shift of gears. The late Dwight Macdonald — the film critic for Esquire back in the early 60s, when it was still possible to write for that magazine about movies as an art form rather than as a combination of sport and business — suggested in one of his columns that a shift of focus from one character to another is often a good thing. The occasion was a 1960 showing of William Wellman’s 1931 The Public Enemy, which Macdonald defined as “James Cagney’s picture,” adding, “Wellman uses Cagney with subtlety, keeping him in the background much of the time while secondary characters occupy the foreground….So it is all the more powerful when Cagney moves into the foreground at the big moments; our taste for this extraordinary actor has not been blunted by seeing too much of him.” It might be argued that this strategy is more attributable to Kubee Glasmon and John Bright’s script than to Wellman’s direction — a typical oversight in the auteurist 60s, even from an alleged antiauteurist. But wherever the shift in focus came from, Macdonald clearly had a point.

Macdonald was less kind to Psycho, a film he disliked for its violence. There the lead actress is killed off after the first 40-odd minutes, and a group of secondary actors moves into the foreground. But in that case I feel the shift of gears is less classical in spirit than modernist, a trick dependent on the star system that entails an abrupt change in focus rather than an evolution from one center of interest to another. In any case, Macdonald argued that shifting a character from the background to the foreground often enhances narrative economy as well as depth; as he put it, “The development of secondary characters is usually a sign of a good movie.” 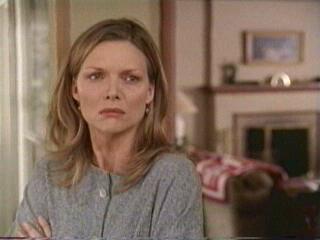 What’s tricky about The Deep End of the Ocean is that the central character and the character on whom most of the emotion is focused are different. The central character is a three-year-old boy named Ben (Michael McElroy) who gets kidnapped from the lobby of a Chicago hotel in 1988; nine years later his parents rediscover him quite by accident in their Madison, Wisconsin, neighborhood. But the story’s focus is Ben’s mother (Pfeiffer) and her grief, depression, and subsequent adjustment to the loss of her son during that nine-year period. When she finally happens upon her son, roughly halfway through the movie, the question of what happened to him nine years ago and how he understands that event naturally becomes the film’s most pressing issue. Yet it can’t be addressed or resolved in any but the most rudimentary fashion until the movie shifts its priorities, and this takes a fair amount of time.

Working under the astute and unsentimental direction of Ulu Grosbard, Pfeiffer does a terrific job as Beth. The way she slides into hysteria a few hours after Ben’s disappearance or mopes about the house months later indicates how far her talent extends beyond the beauty and glamour she’s given pictures as disparate as Dangerous Liaisons and The Fabulous Baker Boys. In The Deep End of the Ocean Pfeiffer is never simply an actress showing off how well she can convey an emotional state; instead a complexly imagined character develops before our eyes in a succession of phases that follow one another like ocean waves. But once Beth discovers that the 12-year-old boy who offers to mow her lawn is actually her long-lost son (Ryan Merriman) living under a different name, Sam, the movie starts to undergo an irreversible sea change. Suddenly the questions we’re asking are about him: how much Sam remembers about the first three years of his life and what his memories mean to him. It’s a shift of gears that takes up most of the movie’s remaining energies, and though Pfeiffer’s character doesn’t quite get lost in the shuffle, her role undergoes a radical shift in function, meaning, and importance. Her character may become wiser and firmer, but her role becomes smaller and flatter; it has to for the other story to take over. 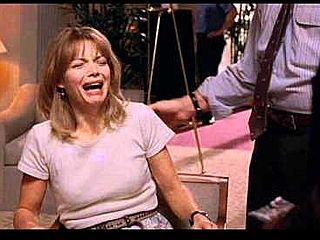 I haven’t read the best-selling novel by Jacquelyn Mitchard that the movie is based on, but I would surmise that the splintered effect comes less from the novel than from the fact that Pfeiffer’s own company produced the movie. It’s surely just as axiomatic as Macdonald’s critical thesis that movies produced by nondirecting actors are frequently thrown out of balance, because what makes for a well-balanced performance and what makes for a well-balanced movie are typically miles apart. And though it’s certainly to Pfeiffer’s credit that she chose a script in which her character is more important at the beginning than at the end, it’s still hard to deny that her vibrant, nuanced performance as the distraught mother ultimately unhinges the story to some extent, relegating its major concerns to the back burner until the film is nearly over. 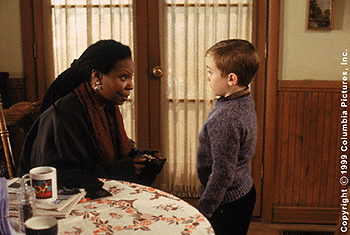 Though Grosbard, Pfeiffer, and the other actors — including Treat Williams as Beth’s husband, Jonathan Jackson as Ben/Sam’s older brother, and Whoopi Goldberg as the detective in charge of the kidnapping case — do everything they can to navigate this transition, they’re ultimately at the mercy of the script. And though the screenwriter, Stephen Schiff, shows a lot of thoughtfulness in carrying out this task, it’s still finally more than he can manage without foreshortening the characters and straining our credulity. (Despite a dutiful mea culpa from Goldberg, the case going unsolved for nine years is the film’s second toughest fact to swallow; the first is the incredible coincidence of the kid turning up in his original family’s neighborhood and offering to mow the lawn.)

Schiff has already shown a great deal more craft and intelligence in his scripts than he did in his earlier professions as film critic and celebrity interviewer. (His first produced script was Adrian Lyne’s version of Lolita; I haven’t yet seen True Crime, due out shortly, which he cowrote for Clint Eastwood.) But I wonder if even Ben Hecht could have pulled off the intricate modulation this script requires: filmmakers and audience alike must pass from a mystery story to a tale of psychological adjustment without feeling cheated. The effort is commendable and even touching, but inevitably there’s some disappointment when the first movie has to be sideswiped to make way for the second.