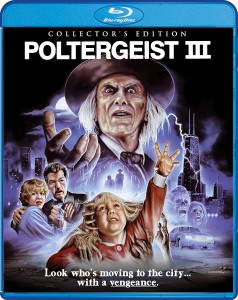 In this strictly routine second sequel to Poltergeist, directed by Gary Sherman from a script by Sherman and Brian Taggert, Carol Anne (Heather O’Rourke) is now happily living in Chicago with her uncle Bruce (Tom Skerritt), aunt Pat (Nancy Allen), and cousin Donna (Lara Flynn Boyle). But during a session at school with a therapist (Richard Fire) something nasty starts to happen when she looks in a mirror. Most of the action is confined to a single brand-new skyscraper, and the moves are both standard and predictable: periodic jolts from the other world that seem almost arbitrarily spliced into the action, setting up the rational-minded therapist as the major fall guy, and never paying much mind to plot or coherence, meanwhile cribbing from everything in sight (The Exorcist, The Shining, the first two Poltergeists). (JR) 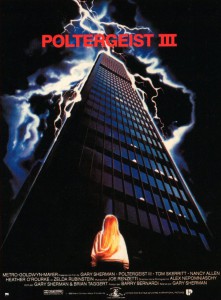