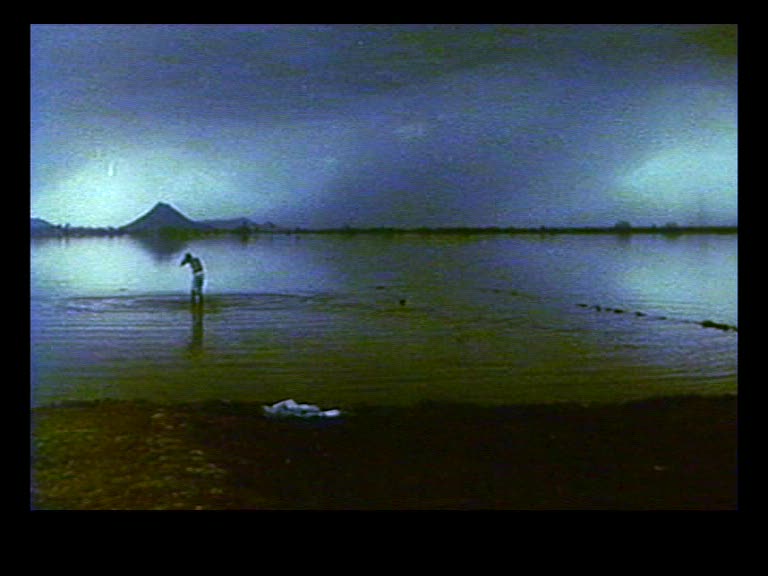 Roberto Rossellini’s extended trip to India comes at the end of his richest period as a filmmaker in which his various staged encounters between fiction and non-fiction were most adventurous. At  the war’s end he was primarily concerned with the human devastation in Italy and Germany, but once he began working with Ingrid Bergman, with whom he was living after their affair busted up both their marriages, domestic issues came to the fore, particularly in such features as Europa 51, Voyage to Italy, and Fear. Other bold forays during this period include a feature about Saint Francis of Assisi, a comic fantasy called The Machine That Killed Bad People (about a still camera that turns its subjects into statues), and a direct-sound recording of a play starring Bergman, made at a time when all films in Italy were dubbed.

When he traveled to India at age 51, Rossellini worked concurrently on his masterpiece India Matri Buhmi (1959), a set of interlocking tales and commentaries which Jean-Luc Godard once called “the creation of the world,” and a ten-part television miniseries that was broadcast in both France and Italy the same year. During this visit, he became romantically involved with his main script collaborator, 27-year-old Sonali Senroy Das Gupta, a traditional Brahmin who was married with two small children and, ironically, went to work for Rossellini only at her husband’s insistence. The ensuing scandal forced her and Rossellini to leave the country before the feature was finished in French and Italian studios. 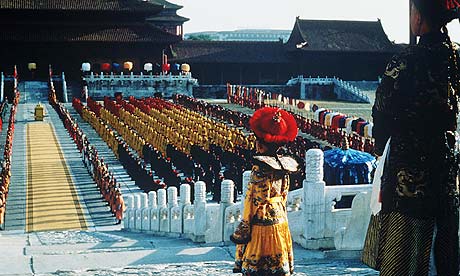 Key Scene: Pu Yi as a child bring shown a toy model of the Imperial Palace

Many colleagues of mine regard Bernardo Bertolucci’s epic blockbuster about the life of Pu Yi (1906-1967) — China’s last official emperor, not counting Mao — as a potboiler, despite (or is it because?) it won nine Oscars. Certainly the fact that it was made in English and with the full cooperation of the Chinese government should give one some pause. But one could also argue that it’s the only Bertolucci film that truly fulfills his career-long ambition to somehow reconcile Marx with Freud, and one way he does this is by making its title hero both marginal and central to the history of modern China.

Pauline Kael complained about the film’s refusal to show us the Forbidden City, where the Imperial Palace is located, even once from the viewpoint of the Emperor, riding on a golden palanquin ten feet in the air, asking, “What better way…to show us the true meaning of a life of privilege?” But this is to confuse the subject of Before the Revolution, arguably Bertolucci’s best film, with the subject of The Last Emperor, which is the historical fate of a collective symbol. Why ask us to share Pu Yi’s illusion of power and mastery over China?  More to the point, Bertolucci shows us Pu Yi’s education starting with his introduction to a toy model of the Palace, which causes him to giggle. From the vantage point of the Emperor’s “re-education” in the 1950s — the vantage point from which the story is told — the Palace is a toy. 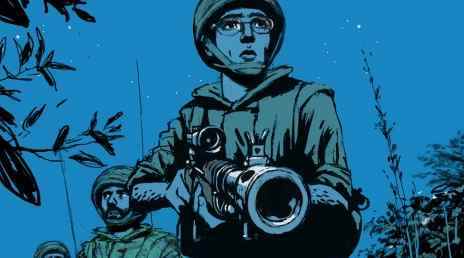 One could argue that the live-action documentary finale of Ari Folman’s animated feature is in some ways the most conventional and unexceptional part of it, simply because it isn’t animated. Yet it also turns out to be far and away the most powerful thing in the film, and this is entirely because of its placement — the way that everything else in the film has been a preparation for it.

Folman himself is a documentary filmmaker who turned to animation in order to express something that he felt he couldn’t articulate otherwise. He was an Israeli soldier during the 1982 invasion of Beirut, when, in the wake of the assassination of Lebanon’s president, Bashir Gemayel, thousands of innocent Palestinian civilians in the Sabra and Shatila refugee camps were slaughtered by the Christian Phalangist militia — an atrocity that the Israeli army did nothing to stop.

The film as a whole is about the recovery of repressed memories, and it begins with a recurring nightmare of an army friend of Folman, depicted through animation. As certain real memories are recovered in the film by Folman and others, the stylized animated drawings suggesting the distortions of dreams are gradually overtaken by various photographic elements, which suggest intrusions of reality that progressively creep into the pictures until they finally supersede them. Photographs, of course, are every bit as “stylized” as drawings, but we’ve been trained to view them differently, and Folman uses this as a stylistic trick, literally to wake us up.