From The Soho News (November 17, 1981). Ironically, this review was originally copyedited rather clumsily, so I’ve tried to restore some of its original logic and meaning. Incidentally, for those who might be interested, my earlier review of Nabokov’s Lectures on Literature for Soho News can be accessed here. — J.R. 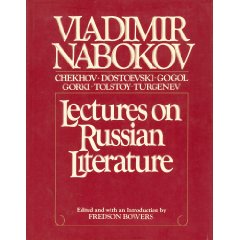 Edited and introduced by Fredson Bowers

Compare the book under examination to Nabokov’s Lectures on Literature, reviewed in these pages last November. Is Volume II a worthy successor, an arguable improvement, or a distinct letdown? Explain. (Use concrete examples.)

All three. Issued in a uniform edition at the same price, only 50-odd pages shorter -– the jacket Indian-red in contrast to last year’s sky-blue –- the book can be considered a worthy successor. Insofar as it contains meaty selections from what I take to be Nabokov’s supreme act (and work) of literary criticism (not counting his voluminous notes on his translation of Pushkin’s Eugene Onegin, which I haven’t read) –- namely, his eccentric and indelible Nikolai Gogol, first published by New Directions in 1944 -– it can arguably be deemed an improvement, even over his exhilarating and enlightening lectures on Flaubert and Kafka in the first volume.

But in most other respects, Lectures on Russian Literature is a distinct letdown. Given the book’s title, it’s hard to adjust comfortably to the conspicuous absence of certain authors. (For the record, Chekhov, Dostoevsky, Gogol, Gorki, Tolstoy and Turgenev are the ones included.) Granted that Nabokov never taught a favorite like Andrei Bely’s Petersburg because no satisfactory English translation existed at the time. But what about his beloved Pushkin and Lermontov, both of whom he translated at length, not to mention such writers as Blok, Goncharov, and Leskov?

According to Nabokov’s son Dmitri, these and at least 11 more unrepresented Russian writers were taught by his father at Cornell at one time or another, but the lecture notes haven’t survived. Is it merely a whim of fate, then, that deprives us of Nabokov on Lermontov and Pushkin, while preserving his relatively forgettable and unexceptional asides on Maxim Gorky?  Or could this possibly have something to do with the fact that the editor curtly yet implicitly labels all the missing figures as “minor Russian writers,” in apparent contrast to Nabokovian aversions like Gorky and Dostoevsky?

This brings us to Fredson Bowers himself, described on the flyleaf of both volumes as “the leading authority in the field of textual editing” who “has prepared definitive editions of the works of Christopher Marlowe, Nathaniel Hawthorne, Stephen Crane, and William James.” The brilliant presentation of Lectures on Literature left me in no mood to question the first credential, particularly in relation to all the heavy-duty credits that follow it. Now I’m wondering why he deserves a “the” in front of “leading authority” instead of an “a,” and whether “authority in the field of textual editing” is distinct from “textual editor” (or just “copyeditor,” for that matter). For the editing (and copy-editing) of this book is not always tidy. The discussion of The Brothers Karamazov is inexplicably missing from the table of contents, a few really awkward or downright gibberish sentences are left intact (e.g., of Anna Karenina, “The key to its structure is consideration in terms of time” and “The birth of faith in Lyovin, the pangs of faith birth”), and some passages are as needlessly choppy as one motorboat bisecting the wavy trail left by another. (“But nature comes in not only as the villain of the piece: it also has its good,” Nabokov says in relation to “The Death of Ivan Ilyich”. “Very good and sweet side.” Is this a note, an afterthought, or a hiccup?)

Enough kvetching. Now tell me some more about what’s good in the book. Once again, be explicit and cite copiously.

When Nabokov really loves what he’s lecturing about, as with Gogol and Tolstoy –- not merely likes, as with Turgenev, or admires, as with Chekhov -– his style passes through some exciting sea changes, and what emerges is mimetic criticism of a very high order, appreciation that imperceptibly turns into a form of pastiche or parody:

“A creative reading of Gogol’s story [“The Overcoat”] reveals that here and there in the most innocent descriptive passage, this or that word, sometimes a mere adverb or a preposition, for instance the word “even” or “almost,” is inserted in such a way as to make a harmless sentence explode in a wild display of nightmare fireworks, or else the passage that has started in a rambling colloquial manner all of a sudden leaves the tracks and swerves into the irrational where it really belongs, or again, quite as suddenly, a door bursts open and a mighty wave of foaming poetry rushes in only to dissolve in bathos, or to turn into its own parody, or to be checked by the sentence breaking and reverting to a conjuror’s patter, that patter which is such a feature of Gogol’s style.” (At another point, this story “describes a full circle: a vicious circle as all circles are, despite their posing as apples, or planets, or human faces.”)

“Tolstoy follows the contours of the thought, the emotion, or the object until he is perfectly satisfied with his re-creation, his rendering. This involves what we might call creative repetitions, a compact series of repetitive statements, coming one immediately after the other, each more expressive, each closer to Tolstoy’s meaning. He gropes, he unwraps the verbal parcel for its inner sense, he peels the apple of the phrase, he tries to say it one way, then a better way, he gropes, he stalls, he toys, he Tolstoys with words.”

When he’s somewhat less engaged, Nabokov generally reveals his wit and talent more in stray phrases (e.g., “Siberia, that storeroom for Dostoevsky’s discarded waxworks”; “Dostoevsky’s mediocre imitators such as Sartre, a French journalist”) or epigrammatic one-liners: The Brothers Karamazov “is a typical detective story, a riotous whodunit — in slow motion”; “Chekhov’s books are sad books for humorous people; that is, only a reader with a sense of humor can appreciate their sadness.”

Nabokov’s withering, aristocratic disdain — as for Dostoevsky and Sartre, above –– is as personal and as inconvenient, in a way, as a boil on a Gogol character. It crops up with “the second-rate French writer Maupassant (called for some reason de Maupassant),”  with “Upton Lewis,” with the translator Constance Garnett (mainly sniped at in footnotes), and with Conrad.

The latter two are skewered together when Nabokov cites Conrad’s letter to Garnett’s husband, revealing that Conrad thought little of Anna Karenina but found her translation “splendid”. “I shall never forgive Conrad this crack,” Nabokov snarls, and of course he didn’t. A curious thing about this sort of distaste –- often (if not invariably) connected to matters of class and which side of the Russian Revolution someone’s bread was buttered on — is that it defines Nabokov’s literary profile as cruelly as a crucifix while simultaneously bringing it to life and to our attention.

Is the following sentence ascribable to Bower’s editing (or lack of same), Nabokov’s mimetic critical approach, neither, or both? “The Stream of Consciousness or Internal Monologue is a method of expression that was invented by Tolstoy, a Russian, long before James Joyce, character’s mind in its natural flow, now running across personal emotions and recollections and now going underground and now as a concealed spring appearing from underground and reflecting various items of the outer world.” Be brief.

Your guess is as good as mine. 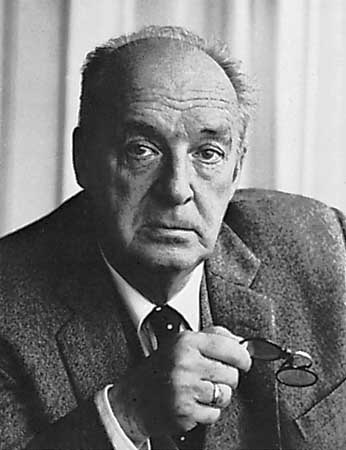