From the March 26, 2004 Chicago Reader. This may help to explain, at least in part, why I had no desire to see the Coens’ other remake, True Grit. (Two other reasons that come to mind:  I didn’t like the original and I’m sick of American revenge plots, offscreen as well as onscreen.) — J.R. 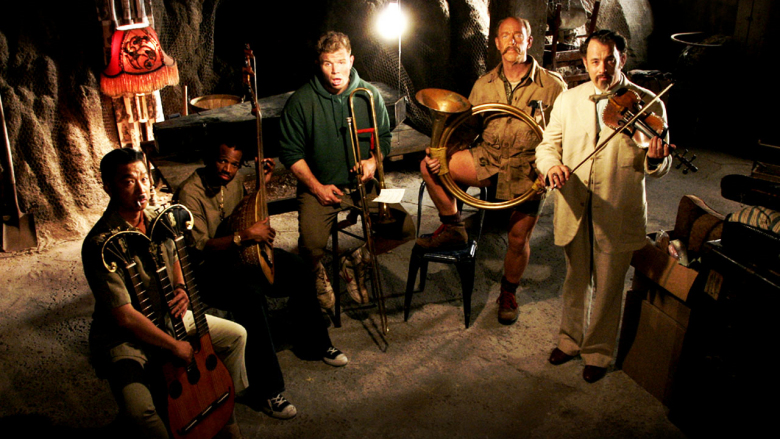 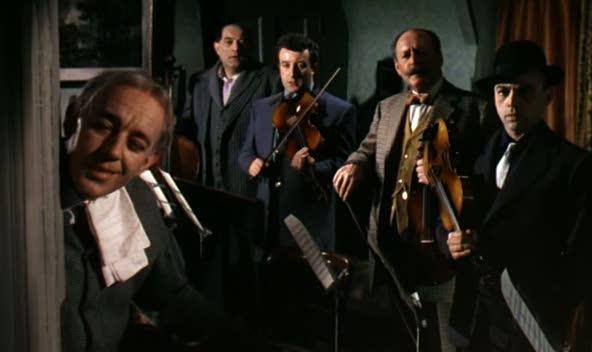 Directed by Joel and Ethan Coen

Written by the Coens and William Rose

The day after I saw the Coen brothers’ remake I watched the original — the Ealing Studios’ The Ladykillers, a popular 1955 English classic directed by Alexander Mackendrick a couple of years before he directed Sweet Smell of Success in the U.S. I’d taped the original over a decade ago, long before American Movie Classics started recutting features and inserting commercial breaks. AMC may assume that any film in which English is spoken is somehow American, but The Ladykillers, scripted by William Rose, is so thoroughly English I doubt its humor could be fully understood without reference to the English character or 20th- century English history. 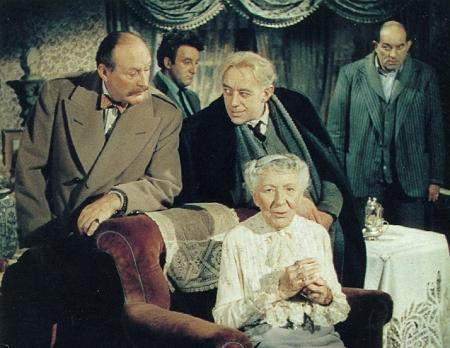 The will to survive shown by the English during World War II, the blitz in particular, and all the archetypal character traits still associated with that determination — the stiff upper lip, the business-as-usual attitude, the stubborn focus on the minutiae of everyday life — are epitomized in this black comedy’s central character, the imperturbable Mrs. Wilberforce (Katie Johnson, who won a British Academy award for the role). The key comic trait of this widowed fusspot is her ability to survive having a gang of armed robbers set up shop in a couple of her upstairs rooms. The tattered “professor” (Alec Guinness) who rents the rooms claims that he and his four cohorts are there to rehearse a string quintet — they close the door and play records in an attempt to fool her — and even manages to persuade her to pick up a trunk containing the haul from their robbery. (Among his seedy colleagues are Peter Sellers and Herbert Lom, the first pairing of the two, who would later play Inspector Clouseau and Chief Inspector Dreyfus in all but one of the Pink Panther comedies.) 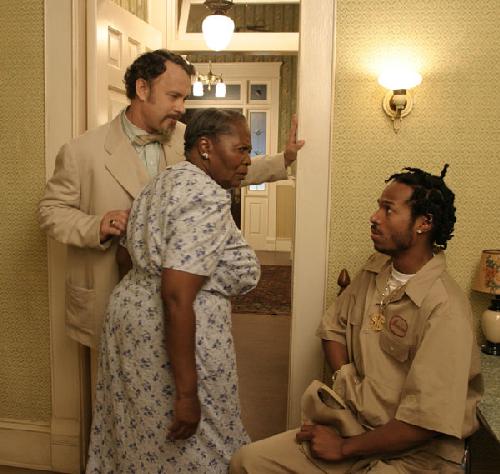 The title of the film is an ironic comment on the five crooks’ inability to kill off this little old lady. Instead they wind up killing one another, each body being dropped or falling of its own accord from a bridge just as a freight train, in a fog of steam and smoke, rushes underneath it. I guess the same meaning could be squeezed out of the title of the American remake, which has been moved to a decaying small town in contemporary Mississippi. The old lady is now Marva Munson (Irma P. Hall), who’s black and not so little. She has a cat instead of three parrots, and much is made of how religious she is — no doubt to justify the extensive use of a wonderful gospel group that’s seen performing in various church scenes. The crooks, who pretend to rehearse with archaic musical instruments in the lady’s cellar, are bent on digging a tunnel from there to the vault inside a casino boat called the Bandit Queen. The gang leader is played by Tom Hanks, whose “professor” is clearly modeled on Guinness’s, despite the southern accent, but the other members of the gang bear no resemblance to the members of the English crew: a black youth (Marlon Wayans) named Gawain MacSam who spouts hip-hop slang and works on the casino boat, a white former civil rights worker named Garth Pancake (J.K. Simmons) who fancies himself a munitions expert, and a tough and taciturn Indo-Chinese heavy known as “The General” (Tzi Ma). Only Lump (Ryan Hurst), a former football player who appears to have suffered brain damage, evokes one of the Englishmen, the softhearted muscleman known as One-Round (Danny Green).

Instead of trains passing under a bridge, we get a single garbage barge — or several identical ones. It’s a telling sign of the Coen brothers’ indifference to any sort of real world that this barge passes under the bridge at regular intervals during the middle of the night, for no discernible reason except to catch the bodies (or the finger one of the robbers loses, the basis of a running gag). It’s equally telling that the Coens regard their characters as garbage rather than as freight.

There’s almost no way one could regard this story as “quintessentially American” in the way that the original is quintessentially English, though I suppose one could say that these individuals form a more multicultural collection than the characters in the Mackendrick comedy. But should the Coens get extra points for letting someone ask the General for a piece of Buddhist wisdom and then having him reply, “Float like a leaf on the river of life — and kill the old lady”?

The original can say a lot about England because it has plenty to say about London — significant portions were clearly shot there. (I wondered if this was one reason Mackendrick got hired to direct Sweet Smell of Success, which makes exciting use of Manhattan locations.) But the remake — which could have been shot anywhere and probably was filmed on a studio back lot — has almost nothing coherent to say about Mississippi, though it does recycle a few clichés (e.g., a dog lying asleep in front of a sheriff’s office). For starters, it hardly seems likely that a black widow there would rent to a white man like the professor. It’s clear in any case that the Coens neither know much about contemporary Mississippi nor care that they don’t.

Does Marva Munson live in an integrated or a segregated neighborhood? There’s no way to tell, because we never see any of her neighbors. Can we believe that Pancake, MacSam, the General, and Lump would all answer the same classified ad placed by the professor? If so, what did it say? The Coens presumably think they’ve carried out their narrative duties by simply noting that these people all answered the same ad. There was no need to offer an explanation in the 1955 version because we readily believe those characters could wind up in the same gang. At the end of the day, the Coens seem less concerned with what’s believable than with what they can get away with.

One reason it’s hard to believe in the Coens’ characters or their surroundings is that just about everything that isn’t borrowed from the original Ladykillers comes from an earlier Coen movie (except the changing expression on the painting of Munson’s late husband, which can be traced back to any number of awful Hollywood haunted-house movies). The southern setting and the rustic blues we hear periodically on the sound track — a brazen grab for an ancillary market — hark back to O Brother, Where Art Thou? Pancake, an unreconstructed 60s type, comes straight out of The Big Lebowski. One of the crooks accidentally shoots himself, a literal replay of the gag that got the loudest laugh in Intolerable Cruelty. Lump is a variation on Gaear Grimsrud (Peter Stormare), one of the heavies in Fargo. This greatest-Coen-hits approach gives the film some unity; without it the setting, characters, and plot would never be more than a collection of disconnected pieces. 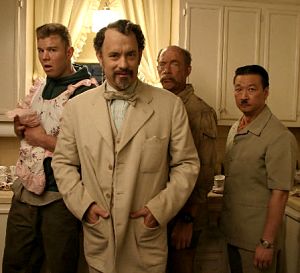 I don’t want to imply that the movie’s a total loss. The Coens sometimes connect the fragments ingeniously. Hanks’s performance is studied and mannered, but the obvious pleasure he takes in playing the part is enjoyable. And the obvious pleasure the Coens take in filming the gospel singing is easy to share.

This suggests that the Coens care a lot more about the people they work with than about the characters they create, which has its advantages. The performers have a lot of energy, and their ensemble work is good. And some people like directors who think all of their characters are idiots in one way or another and all of the audience members are hip for recognizing their stupidity.

But their approach also has drawbacks. I’m beginning to wonder if my preference for The Big Lebowski over their other movies is based on a misunderstanding. I thought the Coens loved their two oafish heroes in spite of their foolishness, but now I wonder if I got this impression just because they cast Jeff Bridges and John Goodman in the parts. Pancake is every bit as foolish and dysfunctional as these characters, but as a leftover from 60s counterculture, he’s much less lovable. It’s not just that J.K. Simmons lacks the charisma of Bridges and Goodman. It’s that the Coens are every bit as contemptuous of his background in the civil rights movement as they were of the leftism of the title hero in Barton Fink.

Believing devoutly in Bob Jones University, as Marva Munson does, is something the Coens find silly yet charming — as worthy of their tolerant smiles as the cheery disposition and blind faith in humanity that Marge displays in Fargo. Perhaps they think these unflappable ladies are like William Faulkner’s Dilsey, the black servant in The Sound and the Fury — towers of strength and durability. Of course, Dilsey, unlike Marge and Marva, was anything but a holy fool. Yet people with political convictions of any kind in a Coen brothers movie are always pathetic and charmless, and therefore fully deserve our self-satisfied smirks. Which is why I often wind up wanting to smirk at the Coens. 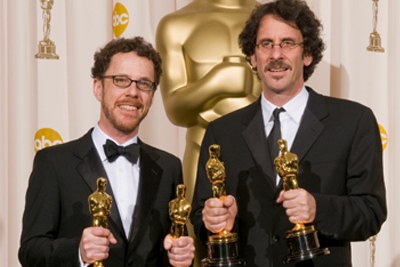